Sneezing when eating? It is fairly common 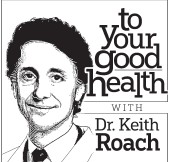 DEAR DR. ROACH: All of us look forward to eating. However, in my case (age 79) it has become a chore. Whether it is breakfast, lunch, dinner or a few snacks, after the first few bites I have to blow my nose. This goes on throughout the eating period, and at the end, my handkerchief is soaked. At breakfast time, after eating, I proceed to sneeze five to 10 times, most of the time. I have become a recluse. I turn down invitations to dinners at homes and restaurants, as it has become an embarrassment.

I have taken Toprol and Timoptic in the past 20 years, but this condition has occurred only in the past four or five years, so I don’t think it’s the drugs. During the day, I am fine with no sneezing and blowing my nose, except maybe once or twice. But when mealtime comes, out comes the handkerchief for another onslaught. Have you heard of this condition? Should I consult a specialist about it? — D.Z.

ANSWER: I have heard about it, many times, as it is much more common than you might think. It goes by the name of “gustatory rhinitis” (which simply means that your nose gets inflamed on eating). It is classified as a non-allergic rhinitis. It is more common in the elderly, though it can happen at any age.

Your regular doctor should be able to help you. If non-medication treatments like nasal saline irrigation haven’t helped, then I usually prescribe ipratropium bromide nasal spray before eating.

DEAR DR. ROACH: recently read your Q&A “Blood donation can affect athletic output.” Your answer is correct, but you missed a key opportunity to educate your readers.

There is an alternative for this man: Instead of donating whole blood, he can ask his local Red Cross about donating via apheresis (as I do). The apheresis process requires more time (up to two hours) and attaches the donor to a centrifuge machine, which separates the donor’s whole blood into red cells, plasma and platelets. Each of those blood products is then either bagged for collection (if needed at that time by the Red Cross) or returned to the donor’s bloodstream (if not). The donor always retains the right to specify which blood products may or may not be drawn, so your reader can always say, “I prefer not to donate reds today, but feel free to draw plasma and platelets,” if he knows he has a challenging athletic event coming up.

In my case, I usually do- nate platelets and plasma about every six weeks via apheresis, but normally not red cells. One advantage of not donating reds is that a donor can return to donate plasma and platelets more frequently. During my most recent donation, my nurse mentioned that there was a serious shortage of platelets but that the supply of red blood cells was fine, so she had been instructed to NOT draw reds from any donor if that donor was able to schedule another donation of platelets in the next few weeks. — M.M.

ANSWER: Thank you for the important information.