Snow caused everyone to stock up on food 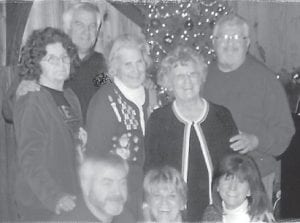 Hello everyone, hope you are all doing well. Was everyone ready for more snow? I’m all snowed in again.

I went out and bought food so I wouldn’t have to go out. I think about everyone else did the same thing. I enjoyed seeing all the people there, Shirley and David Trent, Avis Chandler, and Lucky Sexton, who was looking for stuff to make chili and got me wanting chili. I bought me some in a can called ‘Roadhouse Chili’ and it was about the best I had ever tasted. As long as I can find it, that’s what I’ll be eating.

It was good seeing an old Marlowe boy, Steve Adams. I call him the ‘Quiet Man,’ though I don’t know why. We like to talk about the old times and the old friends from there, and also the Blackey people. He lives there now and used to live there a long time ago and still remembers the people.

I visited Sara Ison last week, and enjoyed my visit so much. Esther Ison and Pearline Nease were there, and I hadn’t seen them in a long time. They said I entertained them, but I told them they got it backward. They entertained me. It was so good seeing them. Sara looked good, but she was so sad. 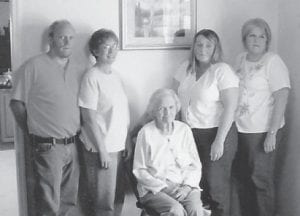 When I got ready to leave I saw four big deer go by my car and across the creek, and up the hill. I wish I had brought my camera. They were so pretty.

I got a call from Gladys Smith who used to write for The Mountain Eagle. We didn’t have any trouble finding things to talk about. We know a lot of the same people. Russell Brown, an old Marlowe boy, lives real close to her. He is the son of the late Martha and Dewey Brown and he is my friend Roberta Willie’s brother.

She said she knew lots of Fieldses. She asked if I had heard of Leonard and Lona Fields. I knew them and their family. Leonard had a sister who lived in Marlowe, the late Edna Brown. It’s a small world.

Gladys and I talked about our pets and our grandchildren. She said she gave two of her grandchildren some money and the three-year-old Caleb said he was going to give his money to the poor.

She told me to say hello to Emma Lou Engle, Rose Ballard, and Christine Fields. So a big hello to all of you from Gladys, and also from me. I read all of your news.

It’s still snowing and we have about six inches already, and it looks like a lot of us won’t get to go to church this weekend. I sure hate to miss it. I look forward to it all week.

Sandra and Billy Hatton went to their lake house last weekend. They were surprised when they found out we had six inches of snow here, as they only had one inch there. I talked with Astor, and he said they had about an inch in Ashland.

I’ve sure enjoyed seeing my brother Bobby Ray Howard on the Government Station with Derek Barto. He does a real good job. I was pleased with how good Bobby Ray has turned out. I was afraid I had ruined his life when he was born.

When he was born on July 4, 1951, he was a son, a grandson and an uncle of four. He was younger than my sons. I always got a kick out of that. He seemed more like a younger brother to them. They never called him ‘Uncle Bob.’ But I’m so proud of Bob.

May God bless all of you. Try to be in church somewhere this week if the snow leaves.