Snow in Ohio is more than in 13 years 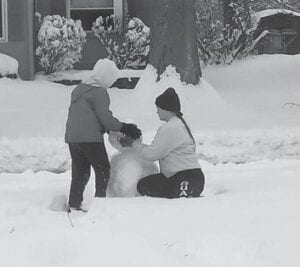 Katie and Kyle Nottingham, grandchildren of Rose Ballard, had fun in the snow.

How was your Valentine’s Day? I hope you received goodies, cards and phone calls.

It is hard to believe that February is half over. It seems as if Christmas was just last week. I really don’t want time to get in overdrive, I will be glad when warm weather gets here.

I try not to complain as it is winter, however I freeze when a cool spell hits in summer. At the present time we have a couple of inches of new snow on top of the other six or more that are already on the ground and expecting more this evening.

The Cincinnati area hasn’t received this much snow over 13 years. Hamilton County Park District used to have a special hill where they allowed sledding. I have no idea if it is still available. There’s a sled in the garage that Keith used while a teenager.

Even though, I had it sort of easy. The farthest I had to walk was from the house we lived in at Vernon Hogg’s between Hot Spot and Roxana. I was only eight years old at the time.

Walking by myself was dangerous. There weren’t any other children to walk with me until I got to Roxana.

I am not saying things to make anyone feel sorry for me. I never had the necessities to keep me warm. I would put socks on my hands to try to keep them warm. I never had boots. Sometimes I would wear my brother Wallace Lee’s high-top Arbuckle shoes, as my feet were small enough to wear his shoes although Wallace Lee was two years younger than me.

If I didn’t have a headscarf, I would use a white bird’s eye diaper for a scarf. My coat was some handme down castoff from someone else. I bought my first new coat when I was 16 years old.

The truth about all this is I really didn’t know that I was poor, because a lot of others were in the same situation as I was.

Sometimes I believe that is why I have accumulated so much junk over the years because of not having anything as a child growing up, especially shoes.

As I sit in the confinements of my warm house I look out the window at the snow and think of the homeless, and my heart breaks. I wonder what makes someone homeless.

I know the economy is bad, especially during this pandemic that has hit everyplace. Homeless people have been in the Cincinnati area for years, now it has hit the Harrison area also.

I remember reading several years ago in the Cincinnati newspaper that a group of homeless people were asked questions. Someone said they wouldn’t work for minimum wage. I quit feeling sorry at the time.

I worked for years at minimum wage, evening and weekends, and cleaned house during the day for not very much money. I was too proud to ask for help.

My children didn’t know if I had a dime or a dollar. My oldest daughter made a remark to me that she was so proud of how I had managed to survive and not ask for help. In fact it is the same as now, what I don’t have I can do without.

I really do thank God that for the past several years I’ve had it a lot easier. I don’t have to work, yet I am still working one day a week even with my health issues for the simple fact, they need me more than I need the money.

It gives me the initiative to get dressed and get going at least one day a week.

I feel that I can finally share some information with you. First off, please remember Johnny and Ann Calihan in your prayers, as God surely answers prayers.

A few months ago Johnny Calihan started having health issues. He was placed in Veterans Hospital then sent to a nursing home where he fell and broke his hip.

He was sent back to another hospital, then to another nursing home that had no rails. Johnny needed rails to keep him from falling and he began to go downhill. He would have bouts of dementia, but he never did get where he didn’t recognize Ann and the family.

Ann and the family made the choice to bring Johnny home. Hospice was called in before Christmas, and Johnny was given a couple of weeks to live.

Of course hospice brought a hospital bed for Johnny. Ann heard a noise. Johnny had somehow got across the bed railings and was in the floor. Thank God no injuries.

I had taken a small transport wheelchair just in case. Some of Ann’s family helped get Johnny in the wheelchair, and brought him into the living room. I knew nothing about this as I stopped to visit the Calihans for just a minute.

As I walked in the door I saw Johnny and I almost fainted in surprise. Johnny knew me in an instant. I had my face shield on and I hugged him so tight, trying not to cry.

Over the last month Johnny is able to feed himself. He has to use the wheelchair as he never had therapy on his hip and it hurts too bad to try to walk at the present.

Ann or the home health aide will push him to the table, then he sits in the recliner in the living room all day watching television. He can read the newspaper and is very alert. Hospice will be releasing him March 1.

Johnny will be 94 years old in May. God wasn’t ready for Johnny, and Johnny had a strong will to live, as he would always tell Ann how much he loved her.

Thank you for your prayers and please keep praying.

A picture that was sent to me on Facebook from Mary Grace Raglin of the Blackey Library. It a picture of my cousin, Stevie Ray Gibson, son of Johnny and Leona Hollins Gibson, grandson of Harlan Hollins, nephew of Canvy Hollins of Roxana, Raymond Hollins of Manchester, Ind., and others I don’t remember. I hadn’t seen Stevie Ray since I left Roxana when I was 13 years old.

I talked to Mary Grace ,then I also saw a couple of names, and found out information about different ones of the family. It is rather ironic that Willis and Irene Gibson lived in Aurora ,Ind., not far from me, and Willis died in a hospital in Cincinnati. I go to Campbell’s Branch Community Center, and Edward Gibson lived not far from there. Their older sister, Martha Gibson, perished in the car that had nine or ten passengers, that wrecked and burned on Pine Mountain back in the ‘50s.

They had a sister, Bessie Jane, who was my age, who passed away when she was about 18.

My great-grandparents, parents and siblings are buried in the cemetery of Stevie Ray and so are his grandparents and parents. The politicians who were elected won’t get off their sorry behinds and fix the road to the cemetery. I wish I lived back there. I would carry a picket sign against every blasted one when it came election time

Hello to Mike and Marcia Caudill. Once again I will say I am looking forward to next month. I doubt anything will change at Carcassonne Community Center or Campbell’s Branch.

Hello Buddy and Bernice Grubb. Please stay warm and be careful when you are out and about on the roads. Hello to your grandson Mike.

Les and Pat Wagner, stay safe and I hope to see you before long