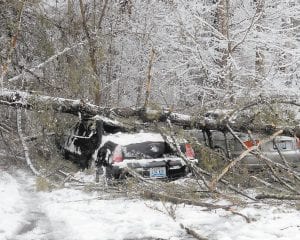 More than 1,500 Letcher County households were still without power Tuesday night, more than two days after the county was hit with its first major snowstorm of the winter.

Kentucky Power Company reported that as of 9 p.m. Tuesday, power had been restored to about 67 percent of those customers who suffered outages while the area was being hit with a wet, heavy snow on Sunday afternoon.

Letcher County Judge/Executive Jim Ward said about 6,000 of the county’s 10,014 homes experienced power outages after snow accumulations six or seven inches in lower elevations and 10 to 12 inches in higher elevations.

“Our outage was all over the county,” said Ward. “Some places the lines would be broken in two or three different places.” 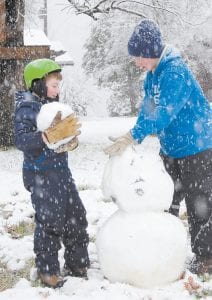 Brothers Judson and Sam Collins of Whitesburg built a snowman while snow continued to fall around 4 p.m. on Feb. 19. Judson is 13. Sam is 8. (Photo by Sally Barto)

As of 9 p.m. Tuesday, 1,526 households were still without electricity, said Kentucky Power. All power should be restored by midnight on Thursday.

“My argument all along is they have neglected clearing the right-of-way for so many years,” said Ward. “I think they do have a schedule in place to do it now and it will take them a while to get caught up. This has helped some.”

“All of our local people have been great,” Ward said of the power company’s response. “They have worked their tails off.”

Ward said he was notified Friday by Kentucky Power that 30 crews were being stationed in eastern Kentucky.

“They have been working until 11 or 12 o’clock at night and then back out early the next morning,” he said.

Ward said the county government was also prepared to handle the winter weather before it arrived.

In addition to the county sanitation and road departments being called out, members of Pine Mountain Search and Rescue, the Letcher County Rangers, the state highway department and the state forestry division assisted in cleanup efforts.

Lt. Brian Damron of the Letcher County Sheriff ’s Department said about 10 wrecks were reported at the time of the heaviest snowfall, between 1 p.m. and 5 p.m. on Feb. 19. Damron said at least five people were sent to hospitals in Harlan and Whitesburg.

Damron said one incident involved a motorist in UZ trying to drive his wife to the hospital because she was having a heart attack. A tree had blocked a roadway and police escorted the couple to the hospital.

Several motorists were left stranded for several hours on US 23 between Jenkins and Pound, Va., when two tractor- trailer trucks jackknifed and caused a large pileup on the Virginia side of Pine Mountain.