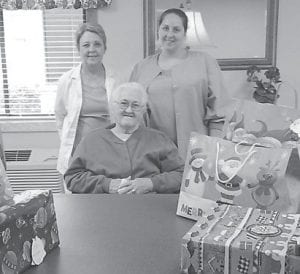 Residents of Letcher Manor Nursing & Rehabilitation took the names of two children from the Tree of Hope, which provides gifts to needy children, and selected Christmas presents for the two. They say they want to help the community, which is facing so many job layoffs. “This is the season for giving, and that’s what we want to do,” said resident Betty Hunsaker. Pictured are (left to right) Darlene Webb, Mary Blair and Tamara Eldridge.

It sure looks like Christmas has arrived as far as the weather in this part of the Ohio Valley area. The dawning of Friday morning brought freezing rain, sleet and later snow, then more snow with a total about seven inches.

I sat by my window watching the fine snow falling, then the larger flakes came drifting so fast and furious. It was so beautiful to watch from the confinement and warmth of my living room. It brought back memories of childhood, of Mommy fixing snow cream for us children. You mention snow cream now, all you hear is about pollution and chemicals in the snow.

I wanted the taste of snow cream all day. The roads were so bad that I was almost afraid to take a chance to drive to the store to get cream. About 10:30 p.m. I was still hankering or the old, sweet taste. I finally went outside scooped a bowl of snow then mixed whipped cream in it.

No, it wasn’t as good as the Carnation or Wilson canned milk, but I made do. I guess my childhood memories will stay with me as long as there’s breath in my body.

I finally got enough energy to go out late Saturday evening to clean my car. I am so glad I did as Sunday brought a new round of ice and about another inch of snow. My car door was frozen so tight that I didn’t think I was going to get it open.

While I was outside I thought of Mommy and so many other women doing laundry and hanging clothes on the line to dry, letting them freeze dry. How many trips she had made up and down the hill when we lived at Roxana, carrying a sack of coal on her little bony back to keep the house warm.

As I was the oldest I would try to help Mommy all I could. I would put so much coal in the burlap sack and try to swing it on my shoulders and it would take me down to ground. Carrying a load of fine coal was much easier as it was softer and you could sort of balance it on your back.

My sympathy goes to the family of Jean Ison, wife of Bill Ison, originally from the Roxana area. Jean was a sister to Polly Maucher, Doug and Michael Ison, to whom I have referred as Frick and Frack. Bill is a brother to my dear friend Ann Calihan.

It is rather ironic how so many from the small place of Roxana and surrounding areas settled In Harrison, New Trenton, Brookville, Aurora and Milan, Ind., and in Ohio in Hamilton, Middletown and Dayton.

It is a horrific shame that so many have to leave the mountains to find work to make a living, which has been a lifelong story way before my time.

I am so thankful there are places that will help younger generation get an education locally. It really hurts me deeply when I read or hear of lives being wrecked by drugs.

Ann Calihan and I have both become high tech as we are both on a site called Facebook.

I talked to Betty Ison and I think Betty and Doyle are staying in so they don’t have to put on ice skates to get around.

I haven’t been anywhere for two weeks and it is getting about time I get out and go listen to bluegrass music.

Once again Les and Pat Wagner spent a few glorious day in the mountains of eastern Kentucky, where they really had a great time visiting with their family. Les and Pat barely got back home before the bad weather hit.

Larry and Becky Hasty are trying to stay warm. Larry is having a little problem with his hip.

Glenora Eldridge, it was really nice talking to you.

I had a delightful call from Jerry Collier, formerly from Millstone. Now he and his wife live in South Shore.

My computer is acting up so before I throw it out the door I am going to say, until next time.