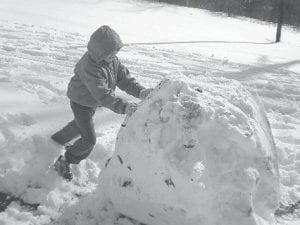 IN THE SNOW – Twelve-year-old Shane Turner is the son of Lesa and Tony Turner of Miamisburg, Ohio, and the grandson of Genita Calihan of Pacies Branch. Southern Ohio correspondent Rose Ballard Durham says, “Shane is a very courageous young boy; he has battled more health problems than some of us will ever have. Shane is active in Special Olympics.”

A big hello from Alaska!

The weather forecasters actually hit this storm system correctly this time as Harrison, Ohio, is hit hard with snow. Why am I complaining? We only have about a foot of snow, when other places have much more. Columbus, Ohio, had 24 inches.

I had a rough time getting home as I had been at a friend’s house. The road that I live on was a solid sheet of ice. When I finally made it to my house, I found a mess as the carpet on my porch had been blown against my door by high winds and crumpled in front of the door. By the time I had struggled to get it straightened up enough to get in the house I was worn out, cold and wet. It was so bad the police issued a warning for only emergency traffic to be on the road.

I made sure my son, Keith Ballard, didn’t need a ride to work, then I didn’t venture out of my house for two days.

Oops! I forgot. I did go out on the back porch to get a bowl of snow to make snow cream. I asked Shirley Wells and Gwen Huff Farmer if they still did this old-time thing. I have heard that snow has bacteria in it. Maybe so, however if a bowl of snow cream is going to get the best of me, then I am going to die happy!

Maybe the sugar isn’t too good for me, well neither was the cream gravy I made for breakfast as cold weather brings a hunger for comfort food for me!

I looked out my side window and saw a huge snowdrift by my fence. At first I thought someone had snow plowed in front of my house, then I noticed my porch and steps were cleaned off. There was only one way this had been done!

I called Keith and asked when he had been to the house to do this. He laughed and said about 1:30 in the morning. While I was sound asleep he was out in front shoveling snow! He works at night and couldn’t sleep and he knew I was in a mess. I really appreciate him being so thoughtful.

Betty and Doyle Ison better be glad the road was impassable as I might have showed up at their front door. Betty is a very good cook and was preparing fried potatoes and onions, pork chops and cornbread. Betty is always in her kitchen cooking something good. Doyle enjoys cooking also.

I have found out I am not the only person that is impressed with the beautiful deck that Doyle built on the back of their house. Betty’s sister, Bessie Shepherd, came to visit and was very impressed with how beautiful this is. The scenery is so pretty as you sit on the deck.

Bessie is a nurse at Whitesburg Hospital. I met Bessie during the couple of times my sister, Loretta Church, was a patient there.

For the first time in several years Old Time Fiddlers was canceled due to the snowstorm. This group meets the first Sunday of each month from 1 to 4 p.m. in the basement of the Miamitown Fire Department. There’s some good music along with refreshments. Those of you who read The Mountain Eagle, come on out and join in some relaxation and fun for a few hours. For any information, my telephone number is at the bottom of this column. Just don’t ask me north or south or east or west!

My sympathy goes out to Bobby Joe and Madonna Pass. They both have lost loved ones in the past week or so.

I listened to Bobby Joe’s “Gospel Jubilee” for a while Saturday morning. You can find this on bounceradio.net from 8 to 11 a.m.

As I was talking to Bobby Joe I found out that I know his uncle, Homer Pass, who used to handle the bookings for the Versailles, Ind., bluegrass festivals. Homer is a very nice person. He booked The Bluegrass Addition Band a couple of times. Homer had to give up the booking the festivals for health reasons.

I finally was able to get Zion Grace Tabernacle Church in Zion, Ill. Gwen’s son, John, sang; it was a pleasure to hear him. John has a very good voice. I enjoyed listening to the church service knowing Gwen was also online listening too.

I went to the Whitewater Senior Center for a couple of hours. As usual there was a good crowd. Bob Bryant was there; it always good to see him. Bob is from Johnson Fork at Premium (Hot Spot). He and his wife have made Harrison, Ohio, their home for many years. Bob is a retired principal of the Southwest Local School District. I missed seeing Polly Ann Maucher.

Ann and Johnny Calihan are both under the weather, as they used to say in the mountains. That flu bug got hold of Ann and just won’t let go. Ann’s brother, Bill, and Jean Ison still have a very sick daughter-in-law. Please keep her in your prayers.

It really bothered Ann not being able to go to the funeral of her aunt, Lovell Creech. Sometimes we can’t do what we want to, especially when illness strikes.

Please keep the Hall family in your thoughts and prayers. Willard, Angie and Lil Willard have given lots of their time for WMMT radio. I missed Angie on WMMT. I don’t have Willard’s home address, I am sure if you sent him a card to the Appalshop at Whitesburg he would get it.

This has been a rough week for me. I am worn out emotionally and physically. I have heard that God doesn’t put more on us than we can bear. Sometimes I wonder about that, then this week a prayer was answered for me.

My little friend, Shirley Wells of Clarksville, Tenn., hasn’t been feeling the greatest lately. This flu seems to have most people in its grip. I hope I can evade it. I have enough problems.

I would like to give you some advice. Please be careful of ordering anything from the computer. You’re not told that you are charged a fee if it is shipped from Canada. When you try to get a refund it takes up to four weeks to get your money refunded to you. It sure doesn’t take four weeks for someone to charge you!

I get aggravated when you purchase something at a store. They sure grab your money, but if you need to return it then you have to give out half your life’s history. I wonder if it isn’t sold. Have you ever thought about how telemarketers get your information?

My daughter, Kay, and Clarence Gray made it safely home and arrived during the snow. During their two-week stay in the Sunshine State they stayed at Newport Ritchie Beach then Clearwater. They went to Miami and Kay said they paid $500 a night for a motel room. They went on to Key West. She said they went through the Everglades and really enjoyed the alligators and all the wildlife. She said it was strange seeing cows and chickens running loose.

Kay and I spent part of the day together. She treated me to a delicious bagel at Pannera Bread. I love the honey-walnut spread they have there.

Kay and Clarence were married 28 years March 8. I forgot it! Belated happy anniversary. Pretty good when you forget your own kid’s important dates.

Hello to the Jones boys, Levine and Bruce, and to all the Jones bunch back on Ingrams Creek.

Hello to my special little guy Devon Cornett. As quick as the weather starts to warm I plan on heading to the mountains of eastern Kentucky, that is if I can afford it. Gas is outrageous here.

Lesa Turner sent me a picture of 12-year-old Shane enjoying the snow. Shane is the grandson of Genita Cornett Calihan of (Paradise Valley) Paices Branch. I hear some of Genita’s children bought Jr. Calihan’s homeplace. I am really glad to hear that.

I know my anonymous friends can’t understand why I love that part of the mountains so much. I love the peace and quiet, the serenity of being closed away from everything. There’s no busy road in front or back of you.

Thanks to the response of my column in The Kentuckian News. I enjoy this online newspaper. In fact I like reading anything about eastern Kentucky.

During the snow I fixed a cup of coffee. Since I had Carnation cream on hand, I added this to my coffee. Sometimes the simplest things can take me back in time. My grandma, Rosa Hall, gave me my first taste of coffee with cream and sugar in it. Grandma would let me dunk my biscuit in the coffee. When the coffee and biscuit mixture was so thick I couldn’t drink it, I would eat with a teaspoon. There’s no donut that could ever compare to the taste of that.

Gwen is so thankful for all the help Glen has been to her during the bad weather this winter.

My brother, Richie Hall, had dye run through his legs at Lexington.