So long to bear hunting in Maine 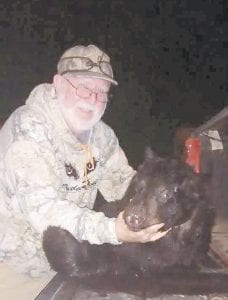 Columnist Steve Brewer poses with a black bear he killed in Maine recently — his final hunt in the Pine Tree State.

Isn’t Struttin’ Time, a welcome relief from all the nasty election talk going on right now?

I think one reason people like to read Struttin’ Time is it gives us a few minutes to just have a quiet time in our world. Now to the finish of the Maine black bear hunt. The one good thing about black bear hunting up north is that you aren’t taken into the “bush” as they call it there, we just say woods, until around two in the afternoon. That gives you time to fish in the morning, oh yes, and to have a good breakfast not too early in the morning.

Sorry, no grits there, but they fix a mean biscuits and gravy just the same. But I see trouble for places like Maine. It is called global warming.

When I first started hunting Maine, back in the late eighties, any week was fine. Now I go the last week of the hunt, because the first weeks just got too warm for the fish to bite and the black bear won’t travel until after dark. You may not believe in global warming, but I have seen it’s firsthand effect.

Well anyway, morning one, the guide tells us we can fish, but the lake is much too warm to do any good. He said our time would be better spent just enjoying the country. We were seven miles from the Canadian border, so we thought that since we could no longer go into Canada — my passport has expired and the others never had one — we could still go as close as possible.

We started seeing the Border Patrol almost as soon as we left. They looked at us funny, so back to the lodge we went and into the bush at three the first day. It was 82 degrees and Day One was a bust. Same for Day Two. Too hot to fish in the morning; too hot to hunt in the evening. The guide, who kept an eye on the weather, told us that Friday and Saturday would be our best bet, as a cold front was coming in.

On Thursday, it started to cool. On Friday it was down to 58 that morning, our best day yet. We needed to leave on Friday. We would not be able to hunt Saturday, so our last hunt to Maine was down to our last few hours. Our guide got me into the bush around two, and it was really cold by then. But having hunted Maine before, I knew how cold it could get quick, so I had taken warm clothes and had the sense to put them on. Although I had cautioned my brother Rick before we left, he told me he wasn’t that stupid and knew how cold it could turn. He still chose to wear the same type of hunting clothes he had worn all week.

Within a few minutes of him getting into the bush, he was already frozen to death. Oh well, sometimes we just need to listen. At ten minutes after six, I saw what I was looking for coming through the blueberry field. Within five minutes of spotting him, I had my 271-pound black bear ready to drag from the woods.

When my guide showed to get me he asked, what are you doing here? I showed him my bear. The first thing he asked was why didn’t you wait for me, I would have field dressed him and dragged him out. I said I know, but had I had done that we would still be in the woods instead of at the truck.

I can’t close this Struttin’ Time without these two bits of information. My brother drove 3,500 miles to hunt, then when he really had the chance he froze out before he could really have a real chance. Also, the State of Maine charged me an extra eight dollars to do what they required me to do, check in my bear. Everyone is after every penny they can get.

Goodbye Maine. I enjoyed you, but I won’t be back. I will be black bear hunting in Letcher County on October 22 until I tag out or the Commonwealth tags me out. Then it’s on to North Carolina after that.

Get into the woods — and take