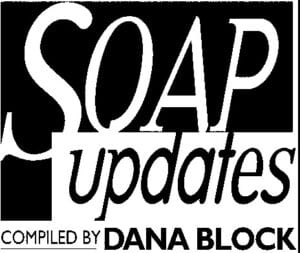 THE BOLD AND THE BEAUTIFUL — An emotional and positive identification was made on a recently deceased person. Bill complicated his cover-up by telling additional lies to those he loves. Zende attempted to right the wrong he made with Carter. Zoe had an epiphany about how to regain her happiness. Lt. Baker made a surprise appearance at Forrester Creations. Everyone was stunned to learn the identity of the police’s prime suspect. Wait to See: Bill’s frustration reaches a boiling point. Eric opens up to Ridge about his relationship with Quinn. Someone keeping a deadly secret fears they’ve been busted.

DAYS OF OUR LIVES — Sami feared she made a huge mistake. A worried Paulina searched for Chanel. Xander woke up with a hangover and no memory of the night before. Nicole played matchmaker for Brady and Chloe. Paulina and Eli were stunned by Chanel’s big news. Chad urged Abigail to revisit the idea of a truce with her sister. Chloe admitted her feelings to Brady. Kristen blackmailed Sami. Abigail reeled over Gwen’s shocking reveal. Theo admitted to Chad that he still had feelings for Ciara. Meanwhile, Ciara received a visit from Justin, who brought a letter from Victor. Philip asked Gabi out on a date. Ben prepared to take drastic action to trigger Ciara’s memory. Sami warned Lucas they had a problem. Chloe chewed out “Susan.” Rafe stumbled upon a new murder suspect. Wait to See: John persuades Marlena to hypnotize him. Claire gives Jan a piece of her mind. Tripp and Allie agree to start anew. 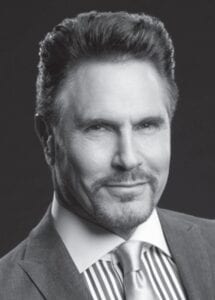 Don Diamont stars as “Bill” on “The Bold and The Beautiful.” Cliff Lipson/CBS

THE YOUNG AND THE RESTLESS — Amanda connected the dots about her family’s past. Sharon warned Rey about Chelsea. Nate let his guard down with Elena. Victor received a surprise visitor. Rey interrogated Chelsea. Victoria and Billy competed for a second chance. Devon and Moses bonded over memories of Neil. Phyllis got the upper hand. Jack set the record straight with Sally. Victor put Chelsea to the test. Rey gave Sharon an ultimatum. Summer and Kyle’s relationship hit a roadblock. Wait to See: Nick makes a confession to Phyllis. Nikki tries to keep the peace. Victoria turns the tables on Adam.