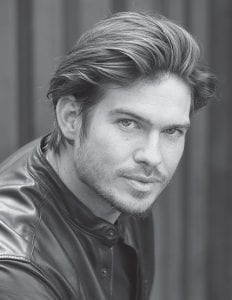 Tyler Johnson star as “Theo” on “The Young and The Restless.”

THE BOLD AND THE BEAUTIFUL — Flo felt responsible when she learned that Hope and Liam were dissolving their marriage. Steffy overheard Liam telling her father how wonderful she was. Ridge played devil’s advocate with Brooke. Flo begged Hope to take Liam back without telling her why. Carter and Hope met to discuss the annulment. Zoe felt uneasy after realizing that Xander knew the truth about Beth. Wyatt proved he was there for Liam during difficult times. Xander threatened Flo to do the right thing. Carter brought the annulment papers for Liam and Hope to sign just as Xander barged in and said he had something important to tell them. Thomas continued to pull the puppet strings of those around him. Wait to See: Flo attempts to justify her actions to Thomas.

DAYS OF OUR LIVES — Sonny and Will shared exciting news with Gabi. JJ rushed to the hospital when he heard that Haley was rescued from the fire. Ben found himself at the wrong place at the wrong time. Ciara and Ben conspired against Claire. Jennifer and Eve had a heated confrontation. Maggie admitted to Victor she fell off the wagon. Chloe and Rex grew closer. Stefan had a surprising offer for Abe. “Nicole” convinced Stefan to give her a job at DiMera. Ted got an idea of how to be the hero in Hope’s eyes. Kate and Marlena comforted each other about Will. Ted revealed a shocking secret to “Nicole.” Haley said an emotional goodbye to JJ. Wait to See: Maggie bonds with someone she least expects.

GENERAL HOSPITAL — Curtis was willing to risk it all. Franco visited Kiki’s grave, while Carly visited Morgan’s as well. Alexis issued a stern warning. Michael set the record straight. Nina asked for more time. Stella pleaded her case. Kev- in pulled a fast one. Drew and Kim took the next step to begin healing. Cameron comforted Josslyn. Julian went to extreme lengths to help his family. Harmony confronted Willow. Lucas made a confession. Peter cautioned Lulu. Maxie was determined to help her friend. Carly accepted a truce. Shiloh received a bit of good news. Liz tried her best to lift everyone’s spirits. Sasha made a date with Michael. Jax defended his motives. Wait to See: Nelle gets a surprise visit.

THE YOUNG AND THE RESTLESS — Lauren gave Phyllis a warning to shut down her site. Later, the Jabot team gathered to celebrate the launch of Jabot Collective, which a tipsy Phyllis crashed and said that everyone would pay for crossing her. Rey questioned Sharon about her growing closeness with Adam. Sharon assured him he had nothing to worry about, but Rey feared that Adam would take advantage of her kindness. Meanwhile, Adam was determined to reclaim his life. Summer cozied up to Theo, while Kyle did his best to hide his jealousy over Summer having a new man in her life. Nikki was suspicious of Victor’s secret meetings with Nate. Wait to See: Paul investigates Phyllis’ disappearance.