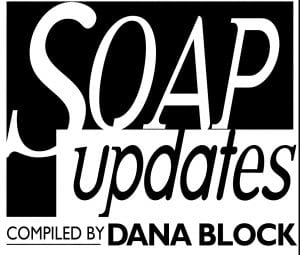 THE BOLD AND THE BEAUTIFUL — Sally refused to believe Wyatt’s news about reconciling with Flo and vowed that she would not make it easy for him to leave her. Flo attempted to make amends with Bill. Eric warned Quinn to quit interfering in other people’s relationships. Sally showed up at Flo’s apartment to set the record straight about her and Wyatt. Thomas thanked Hope for not abandoning his son. Eric gave Quinn some bad news about Shauna. Thomas continued to use Zoe as a cover. Quinn told Ridge flat out that he’d be much happier with Shauna than with Brooke. Katie counseled Wyatt on his relationships with Flo and Sally. Quinn promised Brooke that she would take her down if she didn’t mind her own business. Wait to See: Zoe is flattered by Carter’s interest in her.

DAYS OF OUR LIVES — Sonny and Justin revisited the last day of Adrienne’s life, which happened to be last Mother’s Day. Sonny had a surprising proposal for Will. Sarah went into labor. Tony learned that Anna betrayed him. Maggie got an upsetting visit from someone from her past. Xander made an admission to Victor. As Kristen prepared to give birth, a complication arose. Will found Adrienne and Sarah in a precarious situation. Xander helped Sarah deliver her baby. Kayla relayed some heartbreaking news to Justin. A guilt-ridden Will confided in JJ. Kristen’s entire world was shattered. Justin informed Sonny that Adrienne had died. Victor and Xander made a fateful decision. Wait to See: Abigail tells JJ that Haley has died.

THE YOUNG AND THE RESTLESS — Victoria confronted Billy after finding a receipt to a bar in Billy’s pocket. He admitted that he had been confiding in Amanda, which hurt Victoria even more. As a recovering addict herself, Nikki related to Billy’s struggle to live up to another’s expectations. Victor invited Adam and Chelsea for dinner at the ranch. Later, Adam announced his desire to leave a legacy for Connor by reviving Dark Horse. Kyle witnessed the chemistry between Theo and Lola at the Jabot party. Jack introduced Theo to Jill as the newest member of the Abbott family. Elena insisted her interest in Nate was professional and had to do with the mobile medical clinic. Wait to See: Nick and Chelsea share an awkward encounter.

Now here’s a tip!SPEAKING OF SOAPSNow more than ever, please get your flu shot