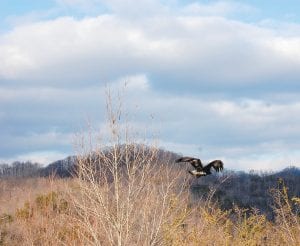 Above, a two-year-old bald eagle flew away from the Letcher County Extension Office Feb. 2. Part of the bald eagle’s claw got caught in a coyote trap at Dry Fork and U.S. Department of Fish and Wildlife officials gave the okay for the eagle to be released in Letcher County.

About 250 people gathered along the ridgeline at the Letcher County Extension Office above Whitesburg last Wednesday to get a close-up glimpse of a twoyear old bald eagle before it was released back into the wild.

“ It’s just awesome to have seen that eagle take off and soar through the air,” said Lee Anna Mullins, of Whitesburg.

The immature bald eagle was found caught in a coyote trap on an abandoned strip mine in Dry Fork on January 27 by Dale Brown and his father, Raymond Brown, the landowner. Kentucky Department of Fish and Wildlife Officials Frank Campbell and Jason Slone freed the bird from the trap and took it to Mitch Whitaker, a master falconer, who works at the Extension Office.

Whitaker, who recently started a raptor rehabilitation program at the Extension Office, took the nine-pound bald eagle to Appalachian Animal Hospital in Hazard on January 28 to be treated by Dr. Gene Smith. Whitaker said the eagle was never aggressive but was attentive, perky and docile. He said the only injury to the bird was a scraped knuckle. 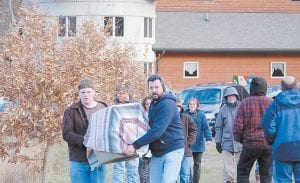 At right, Addison Whitaker (left) and Chris Caudill carried the bald eagle before it was released back into the wild.

A Kentucky Department of Fish and Wildlife biologist placed a metal ring around the eagle’s foot with a number on it so the animal can be identified if it is ever found again. U.S. Fish and Wildlife Service officials gave the okay to release the bald eagle back to the wild, and staff at the Extension Office made the release a public event on Feb. 2.

“We were all pleased with the way the community came out and supported us,” said Lee Adams, staff assistant of the Extension Office. “The participation of our community was wonderful. We had people from every walk of life there.”

Some people left work early. Some picked their children up after school so they could witness the event, too. Letcher Commonwealth’s Attorney Edison Banks was one of the estimated 250 people who stood outside in the cold to watch the bald eagle fly.

“ That’s a pretty good crowd for a windy, cold afternoon,” said Banks. “I didn’t hear anyone complaining about the cold weather. They were all there to see the eagle.”

Banks said the bald eagle took off “so majestically slow and graceful.”

“The wings were in glide mode,” said Banks. “It looked so effortless. The wingspread was beautiful. I can’t believe how fast it got as high as it did.”

R.C. Day, of Whitesburg, said it was a beautiful sight to see the