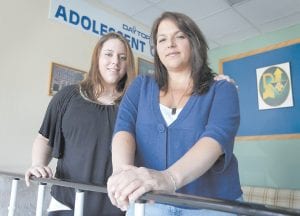 Makenzie Emerson, 19, left, and her mother, Phyllis Ferraro, 46, both of East Islip, N.Y., posed for this photo recently. Emerson had developed an addiction to pain killers and has recently completed treatment. (AP Photo)

West Virginia has the highest rate of prescription drug overdose deaths in the U.S., and about 10 years after a prescription-pill-addiction epidemic began in Appalachia, the problem is so bad in the southern part of the state that police say they can’t handle it alone, Evelyn Nieves reports for online magazine Salon.

Pain management clinics and “pill mills” have exploded in number, feeding the flames of abuse. When one is raided, another almost instantly takes its place. Mingo County Sheriff Lonnie Hannah says there are “spinoffs of drug abuse,” including murder, domestic abuse, burglaries and child neglect, that are overwhelming local law enforcement.

Now the Centers for Disease Control reports the epidemic is spreading beyond the mountains. Pockets of pill abuse exist in Orange County, Calif. and Staten Island, N.Y., and the rate of nationwide abuse has increased by 430 percent. A report from the Substance Abuse and Mental Health Services Administration states the highest rates of pill abuse exist in Maine, Vermont, Delaware, Kentucky, Maryland, Arkansas, Rhode Island and West Virginia.

“ The spread of pilling may be the saving grace for Appalachia and the other mostly poor, mostly rural parts of the country where little white pills are leveling entire communities,” Nieves reports. “They offer the cautionary tale: Political leaders, health professionals and community groups in these parts who have been crying for help can show the rest of the country what can happen when pilling runs rampant.” Or, as Al Cross, director of the Institute for Rural Journalism and Community Issues at the University of Kentucky, boils it down: “The fact that we now have a national epidemic raises the chance that strong action will be taken to thwart it, helping the folks in rural places who are fighting it and who have been victimized by it.”

Sales of the nation’s two most popular prescription painkillers have exploded in new parts of the country, an Associated Press analysis shows, worrying experts who say the push to relieve patients’ suffering is spawning an addiction epidemic.

From Staten Island to Santa Fe, N.M., Drug Enforcement Administration figures show dramatic rises between 2000 and 2010 in the distribution of oxycodone, the key ingredient in OxyContin, Percocet and Percodan. Some places saw sales increase sixteenfold.

Meanwhile, the distribution of hydrocodone, the key ingredient in Vicodin, Norco and Lortab, is rising in Appalachia, the original epicenter of the painkiller epidemic, as well as in the Midwest.

The increases have coincided with a wave of overdose deaths, pharmacy robberies and other problems in New Mexico, Nevada, Utah, Florida and other states. Opioid pain relievers, the category that includes oxycodone and hydrocodone, caused 14,800 overdose deaths in 2008 alone, and the death toll is rising, the Centers for Disease Control and Prevention says.

Nationwide, pharmacies received and ultimately dispensed the equivalent of 69 tons of pure oxycodone and 42 tons of pure hydrocodone in 2010, the last year for which statistics are available. That’s enough to give 40 5-mg Percocets and 24 5-mg Vicodins to every person in the United States. The DEA data records shipments from distributors to pharmacies, hospitals, practitioners and teaching institutions. The drugs are eventually dispensed and sold to patients, but the DEA does not keep track of how much individual patients receive.

The increase is partly due to the aging U.S. population with pain issues and a greater willingness by doctors to treat pain, said Gregory Bunt, medical director at New York’s Daytop Village chain of drug treatment clinics.

Sales are also being driven by addiction, as users become physically dependent on painkillers and begin “doctor shopping” to keep the prescriptions coming, he said.

“Prescription medications can provide enormous health and quality-of-life benefits to patients,” Gil Kerlikowske, the U.S. drug czar, told Congress in March. “However, we all now recognize that these drugs can be just as dangerous and deadly as illicit substances when misused or abused.”

Opioids like hydrocodone and oxycodone can release intense feelings of well-being. Some abusers swallow the pills; others crush them, then smoke, snort or inject the powder.

Unlike most street drugs, the problem has its roots in two disparate parts of the country — Appalachia and affluent suburbs, said Pete Jackson, president of Advocates for the Reform of Prescription Opioids.

The AP analysis used drug data collected quarterly by the DEA’s Automation of Reports and Consolidated Orders System. The DEA tracks shipments sent from distributors to pharmacies, hospitals, practitioners and teaching institutions and then compiles the data using three-digit ZIP codes. Every ZIP code starting with 100-, for example, is lumped together into one figure.

The AP combined this data with census figures to determine effective sales per capita.

A few ZIP codes that include military bases or Veterans Affairs hospitals have seen large increases in painkiller use because of soldier patients injured in the Middle East, law enforcement officials say. In addition, small areas around St. Louis, Indianapolis, Las Vegas and Newark, N.J., have seen their totals affected because mail-order pharmacies have shipping centers there, said Carmen Catizone, executive director of the National Association of Boards of Pharmacy.

Many of the sales trends stretch across bigger areas.

In 2000, oxycodone sales were centered in coal-mining areas of West Virginia and eastern Kentucky — places with high concentrations of people with back problems and other chronic pain.

But by 2010, the strongest oxycodone sales had overtaken most of Tennessee and Kentucky, stretching as far north as Columbus, Ohio and as far south as Macon, Ga.

Per- capita oxycodone sales increased five- or sixfold in most of Tennessee during the decade.

“We’ve got a problem. We’ve got to get a handle on it,” said Tommy Farmer, a counterdrug official with the Tennessee Bureau of Investigation.

In 2006, only 20 states had prescription drug monitoring programs aimed at tracking patients. Now 40 do, but many aren’t linked together, so abusers can simply go to another state when they’re flagged in one state’s system. There is no federal monitoring of prescription drugs at the patient level.

In Florida, the AP analysis underscores the difficulty of the state’s decade-long battle against “pill mills,” unscrupulous doctors who churn out dozens of prescriptions a day.

In 2000, Florida’s oxycodone sales were centered around West Palm Beach. By 2010, oxycodone was flowing to nearly every part of the state.

While still not as high as in Appalachia or Florida, oxycodone sales also increased dramatically in New York City and its suburbs. The borough of Staten Island saw sales leap 1,200 percent.

New York’s Long Island has also seen huge increases. In Islip, N.Y., teenager Makenzie Emerson says she started stealing oxycodone that her mother was prescribed in 2009 after a fall on ice. Soon Emerson was popping six pills at a time.

“When I would go over to friends’ houses I would raid their medicine cabinets because I knew their parents were most likely taking something,” said Emerson, now 19.

One day she overdosed at the mall. Her mother, Phyllis Ferraro, tried to keep her daughter breathing until the ambulance arrived.

“ The pills are everywhere,” Ferraro said. “There aren’t enough treatment centers and yet there’s a pharmacy on every corner.”

The American Southwest has emerged as another hot spot.

Parts of New Mexico have seen tenfold increases in oxycodone sales per capita and fivefold increases in hydrocodone. The state had the highest rate of opioid painkiller overdoses in 2008, with 27 per 100,000 population.

Many parts of eastern California received only modest amounts of oxycodone in 2010, but the increase from 2000 was dramatic — more than 500 percent around Modesto and Stockton.

Hydrocodone use has increased in some areas with large Indian reservations, including South Dakota, northeastern Arizona and northern Minnesota and Wisconsin. Many of these communities have battled substance abuse problems in the past.

Experts worry painkiller sales are spreading quickly in areas where there are few clinics to treat people who get hooked, Bunt said.

Compiled from reports by Salon and The Associated Press.