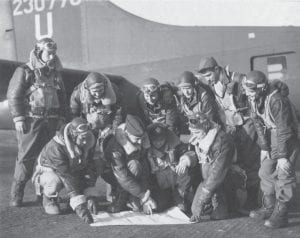 The following report concerning a Letcher County soldier who was part of the crew of a Boeing B-17 Flying Fortress, a bomber used in Germany during World War II, appeared in the February 3, 1944 edition of The Mountain Eagle.

Staff Sergeant Thomas E. Morton of Carbon Glow was waist gunner on the Eighth Air Force Flying Fortress, “Old 66,” which recently flew all the way back across France to England through a hail of German lead, at an altitude of 4,500 feet. It was Morton’s 16th mission.

“Old 66,” piloted by1st Lt. John C. Mouat of Meyers, Montana, had a “runaway” prop as it left the target at Ludwigshaven. It soon became necessary to feather the prop and leave the formation.

The ship was dropping back and couldn’t stay in formation so Lt. Mouat flew back on top of the clouds, ducking into them when he saw enemy planes.

Occasionally the ship would run into clear spaces and then the Germans would throw up at it a stream of flak and machine gun shells.

“I was taking pictures,” said Sgt. Morton,”and the co-pilot called and told me to take a picture of an air drome at the right. Then it started firing at us. The ship started violent evasive action, which bounced all the shells out of my ammunition box.

“I dropped the camera, but I got the pictures, and they were OK.”

Sgt. Morton escaped injury, but a big shell ripped a hole in the end of the ship and tore the tail gunner’s parachute from his back.

Sgt. Morton is the son of Tom G. and Nora Adams Morton of Carbon Glow, and the husband of Mrs. Shirley Morton of Cincinnati, Ohio. He was a coal miner for the Sandlick Coal Co., Whitesburg, before he volunteered for the Army on July 15, 1940, at Fort Knox.

He trained at Chanute Field, Ill., and the Las Vegas, Nev., gunnery school. He holds the Air Medal and two Oak Leaf Clusters.

A letter to WWII soldiers

This report to soldiers from Letcher County fighting in World War II appeared in the February 3, 1944 edition of The Mountain Eagle. Ironically, it mentions that alcohol is still being sold in Letcher County, a reference to the results of the controversial May 1943 election in which the legal sale of alcohol was narrowly defeated while the county’s young men were away fighting for their country’s freedom.

Most all of the young men are gone with the exception of some few who don’t qualify physically or are deferred because of some essential work. Anyhow you see very few young men, some few servicemen are seen home on leave.

The absence of so many young men and those who have gone to defense plants has taken the zip out of the community. Everyone seems quiet and subdued.

Trading goes on, there is a limited stock of most articles. Whiskey and beer are still being sold. Many of the household appliances are not for sale and ammunition for hunters is very scarce.

Crime is at its lowest ebb in Letcher County. There are no places of amusement save the picture shows. Most social gatherings are church meetings or civic clubs.

The rationing of gasoline has practically taken pleasure vehicles off the highways.

The weather this winter has not been very bad, only a few light snows and dry freezing spells.

At this time it seems that men, women, boys and girls are all working and marking time and hoping and praying that the war will suddenly end, and you service men will return home again.