Soldiers happy to be back in Letcher County 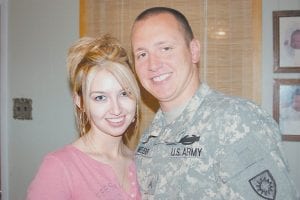 STILL NEWLYWEDS – Cpl. Josh Webb of Payne Gap and his wife Casey were married just days before he was deployed to Iraq in September 2006. Josh Webb liked “making a difference in someone’s life” while he was in Iraq and wished television did more to show some of the positive things that are going on there. (Photo by Chris Anderson)

At least three soldiers from Letcher County were among a group of nearly 600 who were welcomed home during a ceremony in Lexington on Sunday.

Kelly Edward Sexton and Michael D. “Mikey” Combs, half-brothers from Little Dry Fork near Whitesburg, and Josh Webb of Payne Gap near Jenkins, were among a group of soldiers who returned from duty in Iraq and entered the Lexington Center to see numerous homemade signs, American flags and cheers in their honor. It was part of the Kentucky Army National Guard’s largest homecoming weekend.

“I want them to feel the love,” Maj. Gen. Donald Storm, Kentucky’s adjutant general, told the crowd after the soldiers marched into Rupp Arena.

About 510 members of the First Battalion, 149th Infantry, known as the “Mountain Warriors,” and about 70 soldiers from the Heavy Equipment Transport Platoon, 2123rd Transportation Company were brought to Lexington after a debriefing at Camp Shelby in Mississippi. 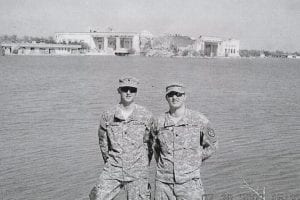 BROTHERS HOME FROM WAR – SPC Kelly Sexton and SPC Mikey Combs of Little Dry Fork were stationed 16 miles apart in Baghdad in Iraq, where this photo was made last month. Their father, James Sexton, said the two talk little about some of the terrible things they saw during their tours of duty. James Sexton says he’s glad his sons are home from what he considers a “war without a reason.”

“Since 9/11,” Fletcher said, “the Kentucky National Guard has answered the call like never before.”

While in Iraq, the soldiers worked with Iraqi schools and protected nonmilitary visitors to the Iraq theater, among other things, Storm said.

Lt. Col. John Luttreel, commander of the 149th Infantry, said soldiers essentially had two goals while overseas: to come back alive and to make a difference in the lives of Iraqis.

Kentucky National Guard spokesman Col. Phill Miller said none of the soldiers in the two units were killed during the deployment, but several were injured. They were deployed in October 2006.

The father of Kelly Sexton, 22, and Mikey Combs, 25, said the return of his sons to Letcher County is the answer to many prayers by many people.

“Praise the Lord,” said James E. Sexton, also of Little Dry Fork. “We had three churches praying and the Lord brought them home.”

Both specialists in the Guard, they were stationed just 16 miles apart near Baghdad, where the younger Sexton served as an assistant chaplain for two years and the older helped with guarding schools and patrolling. They are the sons of Wilma D. Sexton.

Sexton said he is proud of his sons for volunteering for duty in the National Guard “for you and me so that we can be free people,” but that he prayed for their return from what he calls “a war with no reason” every morning, day, and night.

Sexton said his sons were stationed in an area referred to as “the ghetto,” where they saw a lot of deaths caused by automobiles being exploded by bombs.

“They don’t talk much about it,” the elder Sexton added. “They said they did their part and that’s all they wanted to do.”

James Sexton said he fears that no matter how hard the United States or any other government tries to deliver democracy to Iraq the people there aren’t going to accept it.

“No government is going to change them,” he said. “I can’t see that it’s worth jeopardizing our kids’ lives for.”

Sexton said Kelly wants to start working as an evangelist, and that Mikey may return to Tennessee, where he was working as a stone mason at Dollywood before being deployed to Iraq.

Josh Webb, a 21-year-old corporal in the Guard, left Letcher County for Iraq on September 30, 2006, just 14 days after he was married to Casey Adams of Burdine. The two were married on September 16, 2006 at Burdine Freewill Baptist Church. After a honeymoon in Pigeon Forge, Tenn., he had to go to Iraq, where the city of Al Furat would be his home for much of the next year.

The city was heavily divided between the Sunnis in the northern part of the city and the Shiites in the south and violence and bloodshed was a way of life – until the Mountain Warriors arrived.

Webb said the Sunnis and Shiites are now working together on a single city council, and that order has been restored.

“It was hard – very hard,” he said of the time he was away from his new wife. “I missed out on a lot of things – a lot of important things.”

Getting used to life back home has been difficult for Webb, although he said his first night back was the best night’s sleep he’d enjoyed in 15 months. His sinuses have been bothering him, mainly because of the change in climate from a dry 130-140 degree day to the moist 70- and 80-degree days of early fall in Kentucky.

“The last month was the hardest – trying to stay safe and do everything right so you don’t mess up and get yourself and your buddy killed right before you get to come home,” said Webb.

Webb said seeing the change in Al Furat made his tour of duty worthwhile.

Webb said television and other big media show little of the good things that are happening in Iraq.

“It’s not like everything you see on TV,” he said. “They don’t show the progress – the schools, the hospitals. They don’t get to see the kids’ faces when we’d walk them to school in the morning. That, to me, is probably our greatest accomplishment.”

Webb said he plans on rejoining the workforce after spending a second honeymoon with Casey and getting re-acquainted with his family and friends.

“I couldn’t have made it home without them,” Webb said. “I just thank God I made it home.”