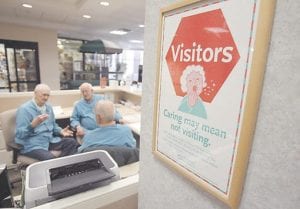 Visiting a loved one in the hospital? Better check on new flu limits first. Hospitals around the country are turning away visiting children and tightening restrictions on adults, too, in hopes of limiting spread of swine flu in the hallways — although there’s little science the limits work.

Utah and Colorado are recommending visitor limits for hospitals statewide. But mostly it’s a hospital-byhospital decision, meaning clinics in the same town can have different rules.

The result? Huge variation. The large Stanford University Hospital in California on Monday barred anyone under 16 from visiting, while the small Central Vermont Hospital turned away the under-12 crowd. Other hospitals have settled on 14 or 18.

The Indiana Heart Hospital announced it isn’t checking for age but for symptoms: Visitors are supposed to answer some questions and wear a green sticker showing they were cleared to enter.

In the Washington, D.C., suburbs, the Inova Health System hospital chain is warning pregnant women they can have just one visitor during their stay in the maternity ward, and it has canceled its popular what-to-expect tours for the soon-to-deliver.

Still other hospitals are trying education instead of rules, posting signs that urge people of any age to postpone that visit if they have a sniffle or cough. Atlanta’s Emory University is discouraging but not barring children — while stocking lots of hand sanitizer and face masks for visitors that, judging by frequent refills, are getting used.

“There’s no perfect way,” said Dr. William Schaffner, a flu specialist at Vanderbilt University Medical Center, which is going with the signs but reassesses weekly. “We cannot hermetically seal the institution. You can have people who are going to get sick tomorrow who already are excreting the virus.”

It makes for a confusing time as hospitals struggle to balance the recuperative effects of having loved ones visit with the fear that they’ll carry in swine flu to people already weakened from something else.

But Dorothy Powers of Overlea, Md., was thrilled with the change. When her 9-year-old son Tyler underwent another round of chemotherapy for leukemia last week, for the first time the halls at the University of Maryland Hospital for Children weren’t full of other patients’ siblings and friends. New rules bar visitors under 12, limit each patient to two visitors — and require those people to stay inside the child’s room.

“It forces parents to be aware of how they can carry germs,” said Powers, who added that the new policy also made it easier to explain to her just-over-the-limit 12- year-old daughter that she couldn’t visit, either, because of a cold. “It’s hard on the family when you can’t be together, but if you can’t be together because of germs. …”

On the other side, nurses describe some tears when new mothers learn they’ll have to go home before introducing all the relatives to the newborn. And hospitals hasten to say they make exceptions if, for instance, a family member is dying.

This isn’t about patients admitted for flu treatment; hospitals are supposed to follow specific infectioncontrol steps for them.

The problem: There’s been little study of whether curbing visitors, or screening them for symptoms, keeps flu from sneaking into other parts of the hospital.

Visitors aren’t the only risk. Health care workers might wear masks while caring for a flu patient, but they can catch the virus at home and bring it back to work. One major difficulty in fighting flu is that people can spread it up to 24 hours before their own symptoms appear.

Consequently, neither the Centers for Disease Control and Prevention nor the American Hospital Association have set guidelines on the issue.

Why so many child bans? Because this new flu, what scientists call the 2009 H1N1 strain, spreads so easily among children.

“This has not been a policy that has been taken lightly,” infectious disease chief Dr. Yvonne Maldonado says in a video posted on Stanford’s Web site to warn the public of Monday’s change at the hospital.

But University of Washington epidemiologist Ira Longini, a well-known expert in how influenza spreads, calls banning all children “a little extreme.” He prefers for short-term visitors to wear a mask: “If somebody’s washing their hands and wearing a mask, they’re probably not going to infect anybody else.”

Vanderbilt’s Schaffner recalls being a forlorn little boy waving to his father, hospitalized for appendicitis, from the street. Today, there’s good evidence that support from family and friends can hasten recovery. So in recent years, many hospitals have ended visitation restrictions outside of intensive care units or other especially vulnerable rooms, and even install fold-out couches and other amenities to encourage families to stay.

Stay tuned: The new limits are supposed to disappear when flu season ends.

“Hopefully, it’s going to be a short one,” said University of Maryland pediatrics chairman Dr. Steven Czinn. “We’ll be very conservative in lifting the policy.”