Cheesecake, that is. Trust us and try it! 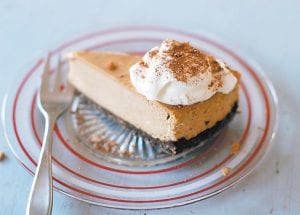 Cheesecake is usually served cold. So brace yourself for something a little different.

The first time I made this recipe, I pulled it out of the oven and set it on the counter to cool. The plan was to chill it overnight in the refrigerator. But my dear daughter — also known as The Girl with the Sweet Tooth — just couldn’t wait to dig in. So I handed her a spoon. And when she started babbling with delight, I tried it, too.

Boing! It was ridiculously good. So good that I now recommend that you serve this cheesecake hot, right out of the oven, topped with a little vanilla ice cream or sweetened whipped cream. Spring it on your guests during New Year’s Eve and see if the party doesn’t become even more cheerful.

That said, getting there requires some care. Be sure to buy plain pumpkin puree, which is sometimes labeled solid pack pumpkin. Avoid anything labeled “pumpkin pie filling” or “pumpkin pie mix,” both of which contain unwanted sugar and spices. You’re much better off adding those ingredients yourself.

Also, don’t forget to drain the pumpkin puree. Losing the excess liquid from the puree improves the final texture and flavor of the cake.

The cooking also requires some care. You’re going to cook the cake in a water bath, which helps to equalize the temperature in the oven and prevents overcooking. But first the springform pan must be tightly wrapped with foil to prevent any water from leaking into the batter while the cake is baking.

Finally, do your best to not over-bake the cake, which will make it dry and crumbly. After the allotted cooking time, it should still be a little jiggly. Worried that the cake might be undercooked at that point? Don’t be. The residual heat will continue to cook it even after you pull it out of the oven.

By the way, this cheesecake also is a knockout when it’s served the usual way — cold. If you decide to go this route, run a knife around the outside edge of the cake to separate it from the pan as soon as you remove the cake from the oven. This will allow the cake to remain intact as it shrinks in on itself, rather than cracking down the middle as it vainly attempts to unglue itself from the sides of the pan.

If you do indeed decide to serve this cold, you need to be more patient than my daughter and let it cool completely on a rack on the counter — it’ll take three to four hours — before wrapping it tightly and popping it in the refrigerator to chill overnight. When it’s time, run a knife around the edge of the pan again, carefully remove the side of the pan, then slice the cheesecake with a knife dipped in hot water (or use unflavored dental floss). And don’t forget the crowning glory. As noted, whipped cream or ice cream are the accessories of choice.

Heat the oven to 375 F. Brush the inside of a 9-inch springform pan with melted butter.

To make the crust, in a medium bowl, stir together the 6 tablespoons of butter, the gingersnap crumbs, brown sugar and salt until combined well. Pour the crumb mixture into the pan and press it evenly over the bottom of the pan. Bake on the oven’s middle shelf for 10 minutes. Transfer to a cake rack and cool for 30 minutes.

Line a mesh colander with a clean kitchen towel. Mound the pumpkin puree into the towel and set over a medium bowl. Bring the ends of the towel up and gently squeeze to remove excess water (you should be able to squeeze out about 1/4 cup of liquid). Discard the liquid. Rinse and dry the bowl, then in it mix together the pumpkin, eggs, brown sugar, cream, vanilla and bourbon. Set aside.

In a large bowl, stir together the granulated sugar, cornstarch, cinnamon, nutmeg, ginger, allspice and salt. Add the cream cheese, then use an electric mixer on high to beat until smooth, about 3 minutes. Add the pumpkin mixture to the cream cheese mixture and beat on low, just until combined.

Bring a large kettle of water to a boil.

Spoon some of the cheesecake onto each serving plate and top with a scoop of vanilla ice cream or a spoonful of whipped cream.

Alternatively, if serving the cheesecake cold, transfer it to a rack, run a sharp knife around the edge and let it cool completely, about 4 hours, before covering with plastic wrap. Chill. To serve, cut into slices and top each slice with a scoop of vanilla ice cream or a spoonful of whipped cream.