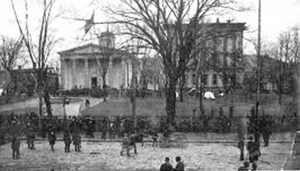 The Old State Capitol in Frankfort as it appeared in the early 1900s.

Members of the Kentucky General Assembly held their sessions in Frankfort unless prevented by “war, insurrection or pestilence.” Gov. Taylor, in the brief time he held the state’s highest office, attempted to move the meeting of the legislature to London, Kentucky, citing threats and rumors of violence and bloodshed in the state capitol.

London was described as a stronghold for Republicans at the time. Few Democrats arrived and there wasn’t a sufficient number in attendance to open the meeting. An equal number of Democrats and Republicans met at the Galt House in Louisville on February 6, 1900 and agreed to end the “unfortunate state of political affairs.” Deposed governor William Taylor said he would retire. Meanwhile the new governor, William Goebel, was being transported to Covington, Kentucky, where he was buried. An estimated 25,000 attended in a pouring rain.

John C. W. Beckham was sworn in initially as Lieutenant Governor and then as acting governor after Goebel was shot and incapacitated. He named John Castleman as head of the militia. Castleman ordered the militia to patrol the State Capitol and the streets of Frankfort.

Meanwhile, William Taylor had a change of heart saying he would not retire after all add that he wanted the courts to settle the matter. Circuit Court judge Field ruled in favor of the Democrats and the decision was upheld by the Court of Appeals. The U. S. Supreme Court ruled on May 21, 1900, that the matter was a state issue and not for it to decide and sent it back to Kentucky to deal with.

There was a lot of talk that the Republicans, including deposed Gov. William Taylor, played a part in assassinating as walked near what is now known as the Old State Capitol. Taylor was in the Federal Building in Louisville, nattily attired and smoking a cigar.

“I am not a criminal,” Taylor said when questioned by the press corps. “I’ll never be a fugitive.”

After learned two detectives were awaiting him outside, Taylor suddenly rushed out a rear door, jumped into a carriage and rode across the bridge into Indiana. He had promptly reneged on his word regarding not being a fugitive and bolted, fleeing to Indianapolis, where he remained for the final 28 years of his life. Indictments were issued against Taylor, but the governors of Indiana protected him from extradition until his death.

Thomas B. Cromwell, a correspondent with the Cincinnati Enquirer went to London, Manchester, Barbourville, Pineville, Middlesboro, Corbin and Williamsburg, seeking information on the assassination.

Charges had already been filed on March 9, 1900, against Kentucky Secretary of State Caleb Powers for conspiracy in Goebel’s assassination. He was secluded in his Executive Building office at the time but took a carriage to the train station upon hearing charges had been filed against him. Powers, dressed incognito in a soldier’s uniform, boarded a train headed for London.

A posse arrested him en route but he produced a pardon that Governor Taylor issued to him in advance for that situation. The commander of the militia knew that Taylor had been deposed and doubted that the pardon would hold up. Although Powers insisted his pardon was valid, he was returned to Frankfort to stand trial. Caleb Powers was tried four times altogether in the era before double jeopardy. Twice he was sentenced to life imprisonment, once to be hanged, and in the last trial the jury was unable to decide on his punishment. His trials lasted a total of eight years as he waited in jail.

Henry Youtsey, a worker in the Kentucky State Auditor’s office, admitted that he furnished the gun that was used to shoot Goebel. He also said he led mountain man Jim Howard to the private office of Secretary of State Powers and pointed Goebel out to him as he walked up the walkway.

“I then left the office immediately,” Youtsey testified. “When I heard the shot, I ran down to the basement and left the building from the exit down there. I went to Governor Taylor’s and told him Goebel had been shot.”

Mountain feudist Jim Howard said he wouldn’t be a scapegoat. He denied having any part in the shooting, saying he wasn’t even near the Capitol at the time. Secretary of State Powers, from whose office the fatal shot was fired, mysteriously left Frankfort by train just one hour before the shooting.

There were numerous trials, sentences, retrials, and pardons in the years that followed. As more and more of the main characters passed away the case was pushed to the back burner. No one will ever know the identities of all those involved or the roles they played. We have learned one principle however. Some political wounds don’t heal. l

(Note from Jadon Gibson: My wife and I were involved in a violent two-car accident about 5:30 p.m. on Saturday, October 30. Since then, I have not been able to look into this story as much as I would have liked. I wish to thank the readers for their understanding.)

One response to “Some political wounds won’t heal (finale)”