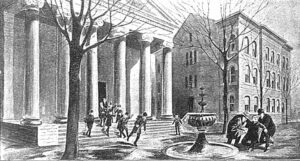 The scene outside the Kentucky State Capitol after Goebel was shot is illustrated.

Prior to the election Goebel successfully sponsored legislation that would place the election process in the hands of the state legislature if there was a dispute over the process or results. The committee was highly Democratic, so the Republicans felt Goebel “was stacking the deck” against them.

The election results were challenged for voter fraud and an investigative committee began the task of looking into the charge. Since Senator Goebel had been instrumental in getting the bill passed that placed such protests in the hands of the committee appointed by the legislature, Republicans protested throughout the commonwealth and especially in eastern Kentucky.

The matter was turned over to the legislature in Frankfort to ferret out and render a decision. Goebel was stealing the election, the Republicans claimed.

Surprisingly William Taylor was certified as the winner and took office December 12 with the Republicans gleefully saying, “Goebel had hung himself by his own rope.”

But on January 7, 1900, the election still rested in limbo. A notice of contest was filed against the new electees claiming improprieties during the election process. The results were resting in the lap of the legislature.

The Republicans were much stronger in eastern Kentucky so the new Secretary of State, Caleb Powers, was asked to bring a trainload of supporters to counter the furor and influence being brought on by the Democrats. The packed train arrived at the State Capitol on January 25 with more than 1,200 heavily armed rabble-rousers, many of them wearing a Taylor for Governor badge. Several said it felt like another Civil War was near as hundreds of Democratic supporters were also arriving.

Many Taylor supporters had criminal records with several known to have participated in mountain feuds. Their rifles were confiscated “for safe keeping” while in Frankfort but the visitors were allowed to carry their pistols. Many did so openly while others chose to keep them discreetly out of sight.

The mountaineers camped on the grounds of the State House and cooked over open fires. They met on the steps of the State Capitol in a meeting called to order by Charles Finley of Williamsburg, a former state representative and Kentucky Secretary of State. He called for the legislature “to respect the votes of the people as it was tabulated and to declare William S. Taylor governor accordingly.” A fear settled like a dark cloud over the Capitol while the eastern Kentuckians were encamped and seen at various locations in Frankfort with firearms in tow.

South Trimble, the Democratic Speaker of the House, announced the following morning that only ladies would be admitted into the gallery of the house, evidently to keep the surly crowd away. Later in the afternoon many of the mountaineers were seen leaving the city. Some said it was due to a lack of food and housing while some felt it was because of their exclusion from the political process

A couple hundred of the more boisterous among them remained. As the legislators entered the Capitol each day they lined the walkway, cursing and scowling at State Senator and would-be Governor William Goebel. Word got out that Goebel and other Democrats and judges of the Kentucky Court of Appeals would be killed.

“Dear Judge, a company of militia will leave for Frankfort tonight,” a January 24, 1900, letter from a Middlesboro source began. “I thought it was all bluff but from the threats and stir in the ranks it looks like they might be planning a desperate move. It was told to me that either Goebel, Hazelrigg or Hobson will be killed before the week is over. From what I have heard I feel it is my duty to notify these men as quickly as possible. I ask you then, as a favor to me, to see them at once and tell them the contents of this letter.”

Goebel received so many catcalls and threats near the Capitol his associates urged him to stay in his room at the Capitol Hotel. “I will not go into hiding,” Goebel told them. “I will do what is expected of me. I will not shirk my duty.”

Despite the tremendous discord, on January 29 Goebel and his staff began planning for the eventuality of being sworn in as governor. A stranger arrived at that time and asked to see Goebel.

“Senator Goebel, I don’t know you, but I feel it is my duty to tell you something,” the burdened man said. “I don’t want to tell you this, but I feel that I must. Coming down from the mountains on the train this morning I overheard some of the men, some dangerous men, say that you would be killed in the next two days. At least two of them said they wanted to be the one to do it. I am afraid that you are in grave danger.”

“What can I do?” Goebel asked his associates after the concerned visitor departed. “I have no choice but to go to the Senate each day. I’ve been receiving death threats since last summer. I guess I’ll just have to wear a steel vest. If I can just live to be sworn in as governor, I don’t care what happens after that.”

The walkway to the Capitol was clear of the rabble-rousers on an icy cold January 30, 1900.

“Well, I can breathe a little easier this morning. They aren’t waiting to badger us,“ Goebel remarked to Eph Lilliard, warden of the new Kentucky State Penitentiary in Frankfort and to a friend, Jack Chinn.

Almost immediately there was a crack from a rifle and what sounded like several other muffled shots coming from a window inside the Capitol about 60 feet away. Goebel was noticeably hit by the bullet.

“They’ve shot me,” Goebel said in a moan as he doubled over before falling to his knees on the walkway. Chinn immediately saw Goebel bleeding profusely and said worriedly, “My God Goebel, they have killed you.”

Goebel slumped onto his side as Chinn attempted to catch him and break his fall. After looking toward the source of the shot, Chinn and Lilliard looked back toward Goebel and as they did they saw him trying to position himself to stand back up.

“Lie down Senator,” Chinn said. “Don’t get up. Those murderers will shoot you again.”

Goebel rolled back over onto his back.

“Won’t anyone come and help us carry Goebel to safety?” Chinn admonished but to no one in particular. Several then came forward including Goebel’s personal page, 16-year-old Eddie Steffey, who had been waiting for him on the Capitol steps.

Goebel’s black hat was placed on his chest as he was carried to a doctor’s office two blocks away. He was bleeding heavily.

Jadon Gibson is a freelance writer from Harrogate, Tennessee. Jadon’s stories are both historic and nostalgic in nature. He wishes to thank Lincoln Memorial University, Alice Lloyd College, and the Museum of Appalachia for their assistance.