Some states want to increase age for buying tobacco to 21 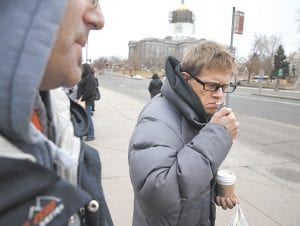 Jason King lit a cigarette at a bus stop in Denver, with the Colorado state capitol building visible in the background. A bipartisan group of lawmakers in Colorado have proposed raising the legal age at which consumers may buy tobacco from 18 to 21. “Ease up on the damn smokers!” said King, age 40, when interviewed on the subject. (AP Photo)

Two Western states with some of the nation’s lowest smoking rates are considering cracking down even more by raising the tobacco age to 21.

Utah and Colorado lawmakers both voted favorably on proposals last week to treat tobacco like alcohol and take it away from 18- to 20-year-olds, a move inspired by new research on how many smokers start the habit as teenagers.

“By raising the age limit, it puts them in a situation where they’re not going to pick it up until a much later age,” said Marla Brannum of Lehi, Utah, who testified in favor of the idea there.

In Colorado, the testimony was similar — that pushing the tobacco age could make it harder for teens to access tobacco, and possibly reduce usage rates among adults.

“What I’m hoping to do is make it harder for kids to obtain cigarettes,” said Rep. Cheri Gerou, the Republican sponsor of the measure.

Both proposals face several more votes. But they’re the furthest any states have gone to curb access to cigarettes by teens. The director of tobacco studies at University College London didn’t know of any other countries considering a tobacco age threshold of 21, but he said raising the tobacco age from 16 to 18 in the United Kingdom proved to be “a public health winner.”

Altria Group Inc., which owns the country’s largest cigarette maker, Philip Morris USA, said in a statement that they support 18 as the minimum age to purchase tobacco, which Congress approved in 2009.

A paper published last year in the journal Annals of Internal Medicine said that 9 out of 10 daily smokers in the U.S. have their first cigarette by 18 years of age, and that about 90 percent of cigarettes purchased for minors are obtained by people between 18 and 20 years old.

The Washington-based Campaign For Tobacco- Free Kids advocates the higher smoking age and argues that it could make a serious dent in tobacco deaths down the road.

“We see this as sort of an added step to reducing smoking rates,” in addition to higher tobacco taxes and other curbs, said Campaign vice president Peter Fisher.

Four states, including Utah, already require tobacco purchasers to be 19. The others are Alabama, Alaska and New Jersey.

Fisher said the 21-fortobacco bills are also pending in state legislatures in Hawaii, Massachusetts and New Jersey. Maryland lawmakers considered and rejected the idea this year. New York City last year raised the age to 21, as did Hawaii County, Hawaii.

Despite the low rates, health advocates in both states testified that a higher tobacco age could depress the rates even further.

When the legal age of smoking was raised from 16 to 18 in the U.K., there was a significant drop in the number of people who started smoking, University College London’s Robert West said.

“The ages from 18 to 21 is a period of huge uptake and even if you’re able to delay (teenagers) from starting smoking rather than preventing it altogether, there would be a significant health benefit. You’re essentially allowing the rather scrambled adolescent brain to settle down and avoid smoking during that period before they turn 21, after which they may decide they absolutely do not want to smoke anyways,” he said.