Something sweet’s in the air over Whitesburg 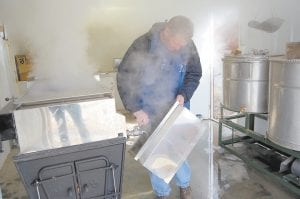 The Letcher County Extension Office is tapping into one of the county’s natural resources and making something sweet.

Shad Baker, agriculture agent for Letcher County, said the extension office, located off of the Whitesburg Bypass, is the first extension office in Kentucky to purchase a maple syrup evaporator and attempt to make syrup.

“A lot of people are visual learners,” said Baker. “They can either go to some other state and see it done or they can come to the Letcher County Extension Office and learn.”

It would take all day to make three-fourths of a gallon of syrup the old way of stirring the liquid in a kettle over an open fire, said Baker. A few families in the county drill holes in maple trees, place buckets under the trees and cook the maple syrup down over an outside stove. 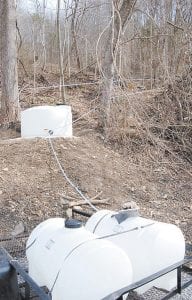 Shad Baker and Mitch Whitaker have drilled holes in 80 red maple and sugar maple trees located on property near the Letcher County Extension Office. Sap flows out of the tree trunks through tubing and into a 500-gallon container. The sap will be boiled in an evaporator and cooked down to maple syrup. Sap is two-percent sugar and maple syrup is made of 66 percent sugar.

“The average landowner can’t take the risk on something like this,” said Baker. “We do things so that other people can see how they are done.”

Baker and Mitch Whitaker, who also works at the extension office, cooked down the first batch of maple syrup on Feb. 20 in a shed located adjacent to the outdoor education center.

The evaporator was flooded with sap with a fire burning on logs underneath the evaporator. Baker and Whitaker closely watched as the water was boiled off of the sap, concentrating the amount of sugar. Sap goes into the evaporator at two percent sugar and comes out at about 66 percent sugar.

When the maple syrup is poured out of the evaporator, the temperature is 219 degrees.

“It had picked up the flavor of the garden hose,” said Baker. “Some of the things we are still in the process of learning.”

He purchased a food grade hose to use for the next trial run.

Baker has a friend in Maine who is a third-generation maple syrup maker and is planning to visit Letcher County in the coming weeks to show Baker how to cook down maple syrup.

At least 200 maple trees are located on the property at the extension office. Baker and Whitaker drilled 5/16 holes at least two inches deep into 80 red maple and sugar maple trees. The holes were drilled at a 10-degree angle slightly sloping down to help guide the sap out of the trees and into tubing.

Once sap comes out of the tree trunks, through the tubing and into a 500-gallon container, the sap must be cooked down or frozen within two days or it will spoil. Bacteria will start to grow in it.

Sap is collected January through March until the sap runs out.

“It’s seasonal, but it is at a time when not much else is going on,” said Baker.

Each year, Baker and Whitaker will go back and drill new holes in the maple trees. The first hole drilled is at chest height and is three inches up and three inches over. Eventually a diamond shape will be created.

“The holes will grow up and you won’t be able to tell it is there,” said Baker.

Collecting sap is a good use of land and is low impact, he said.

“If someone wanted to do it, we could walk them through the process,” said Baker. “Maybe someone can make extra money on the side.”

Hesaid maple syrup is created in a similar way as sorghum.

“Maybe in the fall we can cook down sorghum,” said Baker.

Baker and others at the extension office are going to try to cook down more maple syrup soon.

“Be on the lookout for a pancake breakfast,” he said.