By GILES WHITTELL
The Times of London 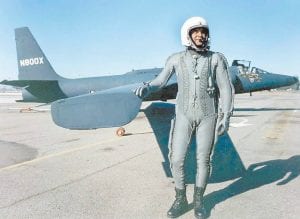 Francis Gary Powers, born in Jenkins in 1929, poses with a U2 spyplane like the one he was piloting on May 1, 1960, when he was shot down from 70,000 feet above central Russia by a surface-to-air Soviet missile exploding close behind him.

At 8:52 a.m. on May 1 a normally garrulous American observed a moment’s silence outside the Lubyanka, headquarters of what used to be the KGB in central Moscow.

He was there to honour the good name of his father, Francis Gary Powers, whose reputation has suff ered for half a century by association with one of the most enduring mysteries of the Cold War.

Fifty years ago this past Saturday, in a full-body pressure suit and helmet, Powers was slammed forward against the canopy of his U2 spyplane 70,000 feet above central Russia by a Soviet surface-to-air missile exploding close behind him. The blast wave dismembered the plane, tearing off first its tail section and then its wings, but leaving its pilot miraculously unhurt.

In an outer pocket of his suit Powers (who was born in Jenkins and reared across Pine Mountain in Pound, Va.) carried a suicide pin that he chose not to use. He hit the ground in shock but with hardly a scratch. By that evening he was in Moscow, in the Lubyanka. The shooting down and survival of Powers changed the course of history: it wrecked a superpower summit at which President Eisenhower and Nikita Khrushchev, the Soviet Premier, had hoped to launch a new era of détente. 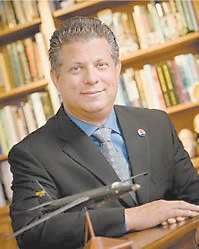 What was not known until the recent declassifi- cation of CIA documents seen by The Times,
was that top US officials never believed Powers’ account of his fateful flight because it appeared to be directly contradicted by a report from the National Security Agency, the clandestine US network of codebreakers and listening posts.

The NSA report remains classified, possibly to spare the blushes of its authors. For it is now possible to piece together what really happened high over Sverdlovsk on May Day 1960 and to understand why America’s most secretive intelligence agency got it so wrong.

According to a summary presented last week by Matthew Aid, the world’s leading authority on the NSA, the agency’s report described Soviet military air traffic controllers as after an aircraft that — far from breaking up at close to 70,000 ft. as Powers later claimed — descended slowly from 65,000 to 34,000 ft., changed course and disappeared from their radar screens. 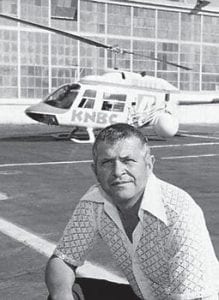 Powers died in 1977 after the helicopter he was piloting for a Los Angeles TV station ran out of fuel and crashed.

If true, this would have meant that Powers was at best a liar and conceivably a traitor. According to one rumour circulated without discouragement from the CIA after the shooting down, he descended to a safe height, baled out and spent his first night as a defector in a Sverdlovsk nightclub.

Newly released documents from a secret inquiry into his conduct carried out in 1962, by which time the CIA had swapped him for a Soviet spy and exhaustively debriefed him, show that some in the agency still believed that the Russians might have hypnotised, drugged or brainwashed him to force him to change his story.

The truth was less bizarre but no less remarkable. Powers took off from Peshawar in northern Pakistan after three tense days spent waiting for the weather along his route to clear.

His mission was to fly for nine hours, on a breakfast of steak and eggs, directly over half a dozen of the Soviet Union’s most sensitive nuclear sites, photographing them and landing hundreds of miles north of the Arctic Circle on the Norwegian coast.

Within minutes the entire Soviet Air Defence system was being mobilised on an order from Mr Khrushchev to bring him down at any cost. Captain Mikhail Voronov, commander of a missile battalion south of Sverdlovsk (now Yekaterinburg), was woken by an alarm at 7 a.m.

“At first I thought it was a drill,” he said in an interview at his home on the Black Sea. “It was not a drill. I was planning to walk over from the barracks to give my soldiers their traditional May Day congratulations. Instead I ran. We all ran. We rushed to our positions and when we got there I told my commander that my battalion was ready to fire.” At about 8.45 a.m., Powers appeared as a dot on Captain Voronov’s radar screen. A single rocket was launched and minutes later the screen appeared to indicate a direct hit.

Yet Captain Voronov could not be sure. He did not report it until word reached his control cabin half an hour later that a pilot had fallen to earth nearby under a parachute.

It is now clear that in that half hour, with the U2 already strewn across the Russian countryside, two Soviet MiG pilots circling over Sverdlovsk were ordered to intercept and ram, if necessary. One of them, Lieutenant Sergei Safronov, was hit by a stray rocket from another battalion. He baled out, dying of his injuries on the way down, but the radar trace created by his plane closely matched the one described by NSA. The agency almost certainly mistook Lieutenant Safronov for Powers. Mr Aid said this week that the NSA misread its own vaunted signals intelligence. The agency has never conceded anything.

In the absence of hard evidence from independent witnesses about what happened to Powers’ U2, conspiracy theories have sprouted like weeds. According to one, crucial information on his flight was passed in advance to Soviet intelligence by Lee Harvey Oswald, President Kennedy’s assassin and a former junior radar operator at a U2 base in Japan. In another, advanced by James Nathan of the University of Alabama, Powers was either a pawn or an accomplice in a US plot to derail détente.

Last month Professor Nathan said that he still believed the entire affair was cooked. Yesterday, in Moscow, Gary Powers Jr said that it had taken the US Government 40 years to set the record straight about his father. He was being generous. It has taken 50, and the record still has kinks in it.

Correspondent for
The Times of London and
the author of “Bridge of
Spies,” an account of the U2
affair and the spy swap that
followed it, published later
this year.

This report is reprinted
from the May 1 edition of The
Times of London.

The man behind
the story

• Francis Gary Powers, born in Jenkins, Kentucky in 1929, was a combat pilot in the 468th Strategic Fighter Squadron. He was a veteran of covert aerial reconnaissance missions

• When he returned to the US, Powers worked initially as a test pilot before becoming a helicopter pilot for a Los Angeles television station. He died in August 1977 when his helicopter ran out of fuel