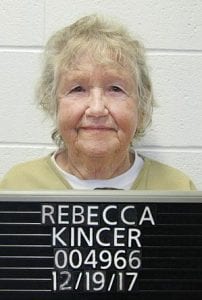 A Mayking man is pleading with officials to keep his mother, who was convicted of murdering her husband here 28 years ago, out of Letcher County when she is released from state prison, probably next week.

Bennett Kincer, 57, of Pine Creek, is now six years older than his mother, Rebecca Jane Kincer, was when she murdered her husband, Vernal Kincer, by shooting him in the head with a 16-gauge shotgun on May 1, 1991 while he was asleep inside their doublewide trailer on Cram Creek.

Ms. Kincer, 78, who also uses the name Rebecca Kincer Duncan, was recommended for release from the Kentucky Correctional Institution for Woman after a February 19 meeting of the Kentucky Parole Board. The board also proposed April 1 as the date of her release from KCIW, located at Peewee Valley in Shelby County.

“I’m asking you to ask the people to help keep her out of Letcher County,” Bennett Kincer said during a recent visit to the offices of The Mountain Eagle. “My shoes are heavy right now.”

Bennett Kincer, who was 29 years old at the time of the shooting, said Vernal Kincer, a well-known bricklayer, had been preparing to leave Rebecca Kincer and, in fact, was sleeping on a mattress on the living room floor when he was shot. Bennett Kincer said that during the days leading up to the shooting his mother, then 51, and his father, then 67, had been arguing over Rebecca Kincer’s expensive habit of gambling on Bingo.

Bennett Kincer said he can’t let of the anger he feels toward his mother, whom he charges with illegally obtaining a $28,000 loan in his name, and then later attempting to frame him for the murder of Vernal Kincer.

“This is 28 years I’ve been a prisoner of my own home,” he said, adding that he recently was able to kick a serious drug and alcohol addiction that began after his father’s death.

Bennett Kincer credits his immediate family — a schoolteacher daughter, a coal miner son, and three grandchildren — with helping him overcome his problems, which he said grew to be so bad that he shot himself three times “just to see blood.”