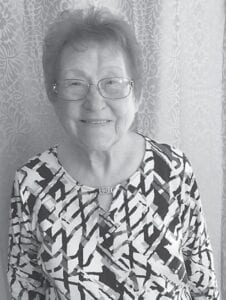 Ann Calihan looking and feeling beautiful as she finally got a haircut after two months of staying at home.

Hello everyone! With this coronavirus, Memorial Day slipped up on me, as I didn’t even realize it was this weekend.

Growing up in the mountains and for several years later, it was called Decoration Day, which was celebrated on May 30. Just so some big shots can get a four-day weekend, it had to be changed.

Who can recall seeing your grandmother, mother, or any women, make flowers from red and green crepe paper?

How are you handling this coronavirus that is still hanging around and has taken so many lives? Have you accomplished anything unusual since you’ve had to stay at home, shelter in place, or be quarantined? With me, it is time out that my granddaughter seemed to have put me in.

Since my son Keith Ballard made me the frame for my iron pot and made such a beautiful assortment of flowers for Mother’s Day, he decided to fill the two claw foot bathtubs in the back yard with dirt, and a nice variety of petunias

Keith didn’t stop there, as he dug a huge circle around the trunk of the blooming poplar tree that I brought back from across from Mommy and Daddy’s house at Blackey. The tree is at least 60 feet high, and the freeze we had in early May really damaged the blooms. 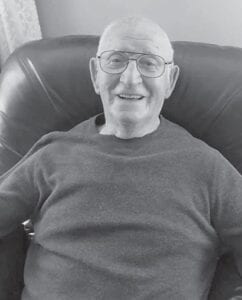 I wish I could say Keith stopped digging places to plant flowers, well he didn’t stop, as he dug around the telephone pole beside the tree. en

If Keith digs another hole, I may put him in it instead of flowers. This is the first time I’ve had this many flowers in my yard in many years.

Now Keith dug the holes, he even planted the flowers in the tubs. The rest I’ve planted, which has been a long and tiring task for me to complete.

The weather has been beautiful in between the rain and storms, and we’ve had a few days in the 80s. It took me a couple of days planting everything. Not being used to the warmth and the sun got to me after a while. 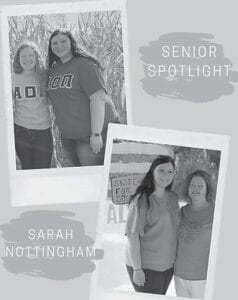 Sarah Nottingham is a 2020 graduate of Northern Kentucky University. She is the daughter of Scott and Anna Nottingham, and a granddaughter of Rose Ballard.

I didn’t think about getting a sunburn until I came in late at night. Too bad the wrinkles don’t tan.

Thanks to Keith for all the hard work that he has done in the yard. I tease Keith and say I could have taken a vacation on what we have spent on flowers and mulch.

Keith has to make everything precise, whether it is a circle or a square. As I was planting around the tree I got tired and pushed the wheelbarrow in the yard, intending to finish later.

Keith said he was going to lower the flowers down so everything was spaced the same distance, so he could mulch. I replied very quickly, “oh no you don’t because I am not finished yet!”

You should have heard him laughing as he said it was a good thing he told me what he was going to do. He would have been in big trouble after all my hard work.

Jack was really good about planting flowers. He would plant roses all along the fence in the front yard and the side yard; daffodils and tulips that came up each year. I love wildflowers, and Jack would dig different kinds of wildflowers for me.

It breaks my heart that my irises froze, as I have a very few that survived.

The year of 2020 sure has been a crazy with the coronavirus pandemic with everything being closed like schools, which worries me as my 13-year-old grandson Bennie doesn’t have any interaction with other kids his age.

The churches are closed yet abortion clinics are opened, liquor stores are open, with everything closed like churches, and VFW posts, so there’s nothing available for AA meetings.

Our government sure has its priorities mixed up.

Appalachian Festival at Old Coney Island, which is held Mother’s Day weekend, was cancelled this year. Then a special bluegrass festival not too far from me featuring Larry Efaw & the Bluegrass Mountaineers, with Jack Adams on the banjo, is postponed.

I really hope the Osborne Brothers Festival, which is held the first week of August, doesn’t get cancelled, as I had to miss it last year due to the accident.

This has been a sad week due to loved ones passing for many friends of mine.

What I miss most of all is not being able to head for the mountains to Carcassonne Community Center and to Campbell’s Branch, even though I can’t dance.

Sympathy goes to Daphne Korner, my cousin Lorene Deal, Steve Miller and family. Zach Harper, who was so much help to me when I couldn’t take care of my grass, lost his grandpa suddenly from cancer.

I have known Zach’s family for years, as Zach’s mother Lee Ann Gosser and my daughter Anna Nottingham were childhood friends.

Tony Hale & Blackwater Band did a two and halfhour live stream show on the computer. It was a great show. Les and Pat Wagner enjoyed the show too.

Hello Les and Pat. Maybe Haddix Pizzeria will open, and we will feel like going to hear Tony Hale & Blackwater in person.

Johnny and Ann Calihan are doing a lot better, especially since they were able to get a fresh haircut after a couple of months of being quarantined.

Mike and Marcia Caudill, if Cavalry Campus doesn’t open soon, you may see a little red car parked somewhere in your yard, with me camping.

Hello to Beatrice Crawford of Louisville.

Saturday, Beechwood High School had a parade for the 2020 seniors. There was over 100 decorated cars with balloons and pictures in the Senior Parade. The seniors wore their caps and gowns.

I was able to attend this wonderful event. Anna was thoughtful enough to bring a lawn chair for us to sit in while watching the parade.

The video of Mountain Minor is being shown on Amazon, free of charge. My book, The Beauty of A Rose is still available for $15 and $6 for shipping.