Son: Reagan had Alzheimer’s as prez 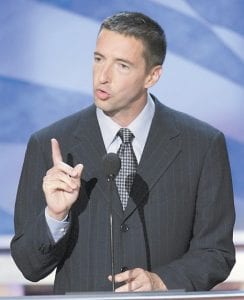 Ronald Reagan’s son suggests in a new book that his father suffered from the beginning stages of Alzheimer’s disease while he was still in the White House.

The memoir quotes excerpts from Ron Reagan’s book “My Father at 100,” published by Viking, an imprint of Penguin Group (USA).

Reagan’s son writes that he believes his father would have left office before his second term ended in 1989 had the disease been diagnosed then.

“I’ve seen no evidence that my father (or anyone else) was aware of his medical condition while he was in office,” Reagan writes. “Had the diagnosis been made in, say 1987, would he have stepped down? I believe he would have.”

Ronald Reagan was diagnosed with Alzheimer’s in 1994, five years after leaving office. The popular Republican president died in 2004 at age 93 from complications of the disease.

The younger Reagan re- calls how his father became uncharacteristically lost for words and looked “lost and bewildered” during the 1984 presidential debates with Democratic rival Walter Mondale. He says his father may have suspected the onset of Alzheimer’s in 1986 when he was flying over familiar canyons north of Los Angeles and became alarmed that he could no longer remember their names.

But Reagan says the issue of his father’s health should not tarnish his legacy as the nation’s 40th president.

“Does this delegitimize his presidency? Only to the extent that President Kennedy’s Addison’s disease or Lincoln’s clinical depression undermine theirs,” Reagan writes. “Better, it seems to me, to judge our presidents by what they actually accomplish than what hidden factors may be weighing on them.”