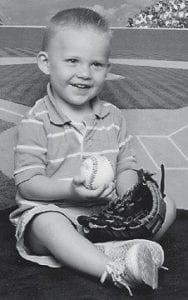 TWO YEARS OLD – Jackson Gavin Bolling celebrated his second birthday August 16. He is the son of Ashley and William Bolling and is the grandson of Delma Blair and the late Jack Blair, and Rick and Susan Bolling. His Mi- Mi and Papaw are Rhonda and Eddie Varner.

I am very thankful I have good friends like Nancy Dierkes and Linda Hollan to be so kind to let me use their computer. My daughter, Anna Nottingham, offered to let me use hers and so did my daughter, Kay Gray, however they are on different Internet servers than I am and I don’t know anything about computers except through AOL.

I have heard when it rains it pours and I am beginning to believe it. My sister, Loretta Church, is in Letcher Manor Nursing Home. Now my brother, Wallace Lee Hall, is there too. Wallace Lee’s wife, Georgia, is in the hospital at Whitesburg, and Wallace has both legs off so he can’t stay alone.

Loretta had a doctor’s appointment and when she was brought back to Letcher Manor, the ambulance driver was kind enough to take her in for a short visit with Wallace Lee. 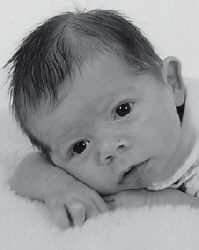 APRIL BABY – Sawyer Jay Ison was born April 19 at Greenville, S.C. He is the son of Jason and Valerie Ison of Easley, S.C., and has an older sister, Hannah Elisabeth Ison. He is the grandson of Carol and Roland Blair of Jeremiah, and Donald and Leanna Ison of Kingdom Come Creek. His great-grandparents are Clayton Shepherd of Jeremiah, Geneva Ison of Kingdom Come Creek, and Letcher and Maerene Short of Whitesburg.

Junior and Loraine Crockett have stopped in a few times to visit Loretta. They drove to Virginia to visit her when she was there. These are what I call true friends. Thanks, Junior, for calling me.

Loretta received a card from Sadie, Lil and Judy Ison’s daughter. She also got a card from Ann Calihan.

I had a nice email from Kenneth Frazier of Milford, Ohio. I think he is planning on coming to Harrison for Letcher County Day. Ken has been trying to get in touch with Billy Ray Mitchell for a reunion. Ken said Polly Ann Ison Maucher had been very helpful in trying to locate different ones. I hope they have a good turnout.

I finally talked to Gwen Huff Farmer for a few minutes via the Internet. By the time we both were online at the same time, we were too tired to communicate.

There’s a program around here through the schools called take your child to work day! I think Keith decided to start a new thing called take your mother to work. Keith works in construction for his brother-in-law, Clarence Gray. Keith was doing a job by himself, cutting concrete as they had poured a cement deck. He then did some specialized stamped concrete designs. It has to be pressured washed and when dried, a sealer has to be applied. I helped to roll on the sealer, then while Keith rolled the sealer, I applied the clear sealer to the edge of the pool area with a paintbrush. At first Keith said there wasn’t anything I could do since the roller wore out. I found a plastic container in the trunk of my car, poured the sealer in it, and went about helping.

I watched Keith as he was working. It is amazing how a sharp saw blade can cut through a thick layer of concrete. It also makes me realize what a dangerous job construction workers have.

I am a happy camper; my computer is up and running. I have WMMT on. Who can ask for more?

Have you noticed some trees are starting to show some real pretty foliage? I think they are called Japanese maples. Whatever, they are real pretty.

There’s a lot of complaining about the heat. That is one thing I am not going to complain about; it will be winter too soon for me.

I think a hex has been cast upon me. First the computer acts up, now the air conditioner is stuck on a certain temperature, cold, and my telephone is acting up. I won’t complain too much about the air conditioner, I can shut it off as it gets too cold. I only have window air in the living room anyway.

Where I live it is always cooler than in town. Sometimes I let my thoughts travel back to childhood, growing up at Roxana,. Mommy and Daddy (Clayton and Ora Hall) never had even a fan, much less an air conditioner. I am sure everyone can relate to that. In fact, Mommy never knew what a screen door was, nor screens on the window. Why, it’s a wonder a boogie man hadn’t carried us off!

When it was hot, oh how good the river felt, as you could cool off there. All you had to worry about was a creepy crawler called a snake. Back in those days you didn’t have sense to worry that there was pollution in the water.

I wish the kids of this day and age had it as simple as our lives were growing up in that little sleepy town of Roxana deep in the heart of Letcher County.

I haven’t talked to Betty and Doyle Ison in a week or so. I hope they are both all right. It seems I have been so busy, I find myself coming and going at the same time.

My daughter, Anna, and Scott Nottingham, along with Sarah, Jessica, and Katelyn, are camping at Lake Erie. Scott’s sister, Sherrie, and her friend, Carrie, and their dog and cat are camping with them. They are going into Canada. I tried to tell them, they forgot something (me).

I want to bring Sarah, Jessie and Katelyn to Kentucky before it gets cold. They have never traveled that far with me. I think it will be fun. If I travel in the van, I will put one in front, one in the middle and one in the back. That is, if they get to bickering.

Hello to Bruce Jones. I guess your garden is about gone by now. Levine Jones, I bet you are still walking, even in this heat. I hope you guys stay cool.

My brother, Richie, is sure enjoying the hot weather. Wanda is praying for winter to hurry and get here. Richie and Wanda’s son, Derek, works in the coal mines, and the trapped miners in Utah have been on their minds quite a bit.

My brother, Jerry Hall, isn’t getting out too much since he fell and got hurt pretty badly. My sister in-law, Mattie, called to tell me about an article in the Lexington Herald-Leader about Hot Spot. I asked her to send me the article. It had Grant Caudill’s picture in it along with those of a couple of other people.

A belated happy birthday to my good friend, Gwen Huff Farmer, August 16. Gwen, I am so sorry I didn’t send you a card. My brain has just about gone on vacation. I sure wish it would have taken my body, too.

Gwen received quite a few cards and phone calls for her birthday.

I talked to Shirley Wells. It has really been extremely hot in her area, too. Shirley has breathing problems so she has to stay in when it is so hot. It sure is good to be able to correspond with her and Gwen once again.

Emma Engle, I hope you and your family are all doing alright. Gladys Smith, I thought of you when I found some possum grapes growing in my backyard. On the other side of the fence there’s a huge poke stalk. If I had seen that in the spring it wouldn’t be there.

Please keep in mind Letcher County Day, Sept. 29, 300 George Street, Harrison Ohio, starting at 10 a.m. Bring a picnic lunch and something to drink. My daughter has a corn hole game so we will have something to do.

It is time to get this on its way. That old clock is once again at my heels.