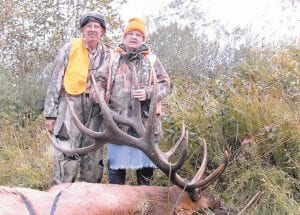 My mom, Faye Morris, 66, was born and raised in Letcher County and loves the mountains. She and my dad, Charles Morris, 70, are in the woods daily riding their four-wheeler hoping to see a deer, bear or elk.

My father does some elk guiding for the lucky hunters that are drawn in the elk lottery. We all applied for the lottery this year and got a shock when we checked the results and found out my mom was the lucky one in our family to get a bull elk tag.

We were all excited about it, but we weren’t sure if she could do it or not. My dad got his .22 caliber rifle out and set a target up for her to start practicing. She was very accurate and was hitting the bull’s eye almost every shot. We knew then she was ready.

Mom had done some hunting in the past, about 40 years ago, and we have some footage of her shooting a rifle on the old 8mm camera. She is a sportsman. I have actually seen her land a fivepound largemouth bass.

The elk hunt started on Sunday evening, October 13. My nephew Robbie Baker and I went with Mom and Dad to the blind, and she was ready to bag her elk. There were four bulls bugling around us and we thought one might get within range before dark, but no luck on day one.

Day two was just Mom, Dad and nephew. They hunted that morning from daylight until 11 a.m., with the bulls still bugling but not wanting to move from their cow herd. Monday evening was the same story — bulls bugling but not moving. Tuesday my Dad decided to move in a little closer without spooking the bulls. He said once you have spooked them they may not return for days.

Still no luck on Tuesday, but he could tell the bulls were getting more active with the bugling. Wednesday morning they decided to move to another blind and few hundred yards from where they had hunted. On their way to the blind Wednesday morning an elk bugled very close to them as they walked down the trail.

Without notice, four cows crossed the trail in front of them. They were shocked to see this monster step out at 40 yards. Mom took a great broadside shot and got him right in the sweet spot. The bull was confused about where the sound came from and he came toward them not know they were there.

Mom said, “I thought he was going to run over us,” but the bull stopped at 20 yards and she shot again, another broadside shot in the shoulder.

He then ran out at 60 yards and Dad told her to go ahead and take another shot, so she pulled the trigger two more times. The bull didn’t go more than 50 yards before he expired.

Mom is an incredible woman. She has two great-granddaughters that I hope follow her footprints.