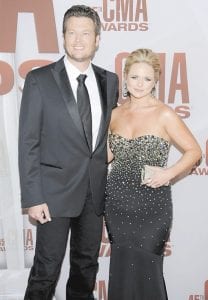 Miranda Lambert is paying tribute to husband Blake Shelton’s late brother with her new single, “Over You.”

Richie Shelton died in a car accident in 1990. The newlyweds wrote the song together about a year ago, and Lambert recorded it for her latest album “Four the Record.” It is the second single released from the album.

The song idea started on a tour bus as they were flipping through TV channels. Shelton’s “Backstory” happened to be reairing on GAC, and it was at the part where his dad was talking about his brother’s fatal crash. His father said: “You don’t ever get over something like that. You just get used to it.”

The couple turned the TV off and started talking.

“Miranda never had a chance to meet my brother,” Shelton said recently. “I was just a teenager when that happened. So I was telling her about him, what he was like, and we just ended up like we do sometimes, writing a song.”

Richie was only 24 when he died. Shelton was 14 at the time. This was the first time Shelton, now 35, really opened up to Lambert about the tragedy.

“We both actually cried while writing the song,” said Lambert, 28. “That’s the only time I’ve ever gotten that emotional writing a song, and him, too. So, I think the initial emotion came out right that day, and I think you hear it in the lyrics.”

Some of the lines are pulled directly from Shelton’s experience. Lambert sings, “Your favorite records make me feel better, cause you sing along with every song. I know you didn’t mean to give them to me.”

“That’s one of the things I got when my brother was killed. The family gave me all his albums and things like that,” Shelton said. “I just listened to them over and over again to feel like he was there.”

Shelton said Richie loved all kinds of music, from Hank Williams Jr. to MC Hammer. He still has his brother’s “No Fences” album by Garth Brooks and says Richie’s favorite song at the time was “Friends In Low Places.”

The songwriting process helped Lambert and Shelton grow as a couple. Lambert calls it the most real song she’s ever had.

“It was really a great moment between us. It was like we moved to a deeper level, not just in our relationship, but also, we respect each other as artists, and being able to write something that personal with each other was really cool,” she said.

Back in October, Shelton sparked a rumor that Lambert was pregnant when he found out “Over You” might be a single. He tweeted: “Just received news that is so cool it supersedes any award, hit song, platinum album, soldout tour or TV show!! What a year. What a year!”

He says he is probably more proud of creating that song than of anything he’s accomplished in his career.

“That to me, that’s what I’m supposed to do as a country artist, a country songwriter, is take a real-life situation that is emotional and make it into music,” he said. “There’s no way I could have performed that song every night. So I’m honored Miranda put it on her record.”

Shelton and Lambert are the reigning Country Music Association male and female vocalists of the year. Shelton was recently nominated for three Grammy awards.