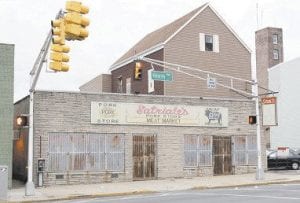 NOW DEMOLISHED – Satriale’s pork store where the television series, “The Soprano’s,” was filmed is seen in Kearny, N.J., is this March 15, 2007, photo. The building that housed the fictional Satriale’s has been demolished and the owner plans to construct condos on the spot. (AP Photo)

Eight months ago, James Gandolfini drove his white SUV out of the parking lot of Satriale’s for the last time, as HBO wrapped up the final season of “The Sopranos.”

Now, the building has followed the same fate as the popular show.

Last month, owner Manny Costeira demolished the structure, home to a fictional pork store where TV mobster Tony Soprano and his Jersey crew hung out on the acclaimed mob drama. On TV, a life-sized pig sat atop the building.

“We whacked the pork store,” said Costeira, who leased the empty building to HBO.

Nine condo units will replace former storefront. The project is called “The Soprano,” and prices range from $325,000 to $385,000. Construction is expected to start in the spring and would be finished in about a year.

Costeira said he can’t sign any contracts because he hasn’t received permits; he said he has commitments for at least three units and a waiting list for the rest.

The show, now popular in reruns, was mostly filmed at a New York City sound stage, but many scenes were shot across the Garden State to provide a real Jersey feel. Several sites, including the fake pork store, were shot in Kearny, a working-class town across the Passaic River from Newark and about nine miles west of Manhattan.

Now that Satriale’s has been demolished, Costeira has been using the Internet to hawk chunks of cast stone from the facade. He said he’s already sold about 1,000 pieces in two sizes, for $25 and $50, to fans as far away as Ireland and New Zealand.

The 2-inch-square smaller chunks are mounted on a black wooden block with an “authentic porkstore” name plate. A “certificate” that accompanies the larger chunks, about a 5-inchsquare, promising it came from the building that once stood as “the familiar location of the fictional Satriale’s pork store featured on the hit HBO television series ‘The Sopranos.’ ”

“It’s quite a little gag gift,” Costeira said. “For a real Sopranos fan, it’s a real piece of the show. It’s a piece of television history.”

And the demolished building represents one less piece of television history seen on a popular bus tour of “Sopranos” sites in north New Jersey.

“The loss of Satriale’s of course disappoints a few of our guests, but we always make the effort to keep the route evolving to include additional locations and enrich the experience however we can,” said tour guide Marc Baron.

Instead of the fake pork store, which was always shuttered, the tour now includes a trip to the Holsten’s, a real-life Bloomfield ice cream parlor where the series’ final scene was filmed.

“They now sample onion rings at Holsten’s, and sit in the booth that Tony sat in,” Baron said.