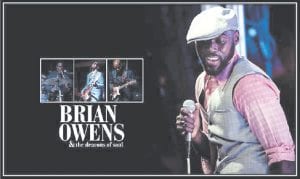 Brian Owens and The Deacons of Soul will perform in Whitesburg on December 31.

National recording artist Brian Owens will return to Summit City in Whitesburg to close out 2016 with his band The Deacons of Soul. Showtime is 9 p.m. Tickets to the all ages New Year’s Eve show are $30 with an option for a dinner package. For more information, call 606-434-8648 or buy tickets at www.summitcitylounge.com.

Owens, a longtime resident of Ferguson, Missouri, has performed at the White House for First Lady Michelle Obama and made multiple national TV appearances. He dazzles audiences with his performances that are full of soul and love. His refined style combining classic soul with a slight modern touch is why he has been referred to as the new voice of American soul.

On January 6, 2017, Owens will be releasing his latest single, “For You,” featuring five-time Grammy winner Michael Mc- Donald, formerly of The Doobie Brothers. The song produced and penned by Owens, is the lead track from his forthcoming new album Soul Of Ferguson and available for purchase on all major digital music retail outlets, including Amazon, Apple Music and iTunes.