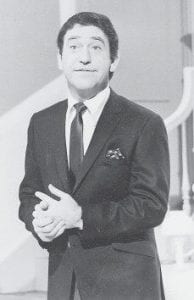 Soupy Sales rehearsed for his Broadway debut in “Come Live With Me” in New York in this Nov. 17, 1966 photo. Sales, the rubber-faced comedian whose anything-for-a-chuckle career was built on 20,000 pies to the face and 5,000 live TV appearances across a half-century of laughs, died Oct. 22. He was 83. (AP Photo)

If you never thought a pie in the face was funny, you just didn’t get Soupy Sales.

If you didn’t want to splat him with a fluffy cream pie, or — even better — if you never yearned to be on the receiving end, well, you weren’t a Soupy Sales fan.

Not everybody was a Soupy Sales fan. Some kids even turned off the TV and went outside and played.

I was a Soupy Sales fan. I loved Soupy Sales, who died Oct. 22 at age 83. He invaded my consciousness for what seemed like an instant a long time ago but left my sensibility forever changed (I still have an unrequited longing for a pie fight).

Many people today may not even know who he was, apart from a guy with a funny name.

But Soupy Sales was funny. He was really, really funny if you were a kid (preferably a boy) around 10 or 11 in the early 1960s. As he migrated through a succession of TV shows on various outlets (I have no idea where he was originating when I watched him), he elevated cheap, cheesy kids’ TV to inspirational levels. If he hadn’t caused kids like me laugh so uproariously, he could’ve qualified for a Nobel Peace Prize.

Excuse my spotty memory if I only cite a few choice Soupy moments. After nearly a half-century, I’ve forgotten many of Soupy’s high jinks, and, in my defense, I should mention that the local TV station that fed him to my small Southern town all too often featured snowy reception, so I couldn’t always see precisely what was going on.

But I saw and remembered enough.

His big grin. His silly dance, for which I can still hum the tune. The sporty black sweater (did it evoke, even in its clean-cut way, the Beats of that insurgent age?), which perfectly offset the white custard dripping from each pie pressed to his face.

In particular, I remember his pet puppet dogs, who, in their clever, penny-pinching minimalism could have rivaled Jim Henson’s brilliant early minimalist Muppet innovations.

I’m talking, of course, about White Fang and Black Tooth.

White Fang was a big mean dog that expressed himself with fierce growling.

Black Tooth was a very nice dog who mostly went “mmmm, mmmmm” as an imploring bid for affection.

Each dog, apart from its limited vocal range, was represented oncamera by a single paw that stroked or rumpled Soupy’s sweater.

For a child to see how fullfledged, domineering canines could be rendered so sparingly had to fire that youngster’s sense of wonder. If a paw and a growl was all it took to be a dog, what couldn’t the imagination create!

Not that Soupy Sales had much interest (as I think back on his show) in educational matters.

And let’s be clear. He wasn’t so concerned about dietary matters (though few people were in those days, even well-meaning moms).

The version of Soupy’s show I saw each Saturday noon was titled “Lunch With Soupy Sales,” and it ended with his fixing himself a simple meal and eating it just before the credits rolled. Menu items, I am sure as a victim of that less-than-gourmet era, would have included a bologna sandwich with mayonnaise on white bread, and, for good measure, a glass of milk.

But with every bite or sip by Soupy, a comedic sound effect was added: “CAR-unch! CARunch!”; “slosh, slosh.” He’d roll his eyes and grin with a mixture of surprise and satisfaction. Hilarious!

Then, for dessert, in a deft display of product placement, he always had Jell-O. Every bite of Jell- O was accompanied by a perfectly appropriate springy sound effect: “boinnnnng!” Which seemed to send him reeling with delight.

It doesn’t get any funnier than that, and likely sold America’s kids a lot of Jell-O.

Now I have no memory of seeing Soupy pull the stunt that brought him the most publicity and got him in hot water: when he invited his disciples to raid their mother’s purses and mail him those rectangular, green pieces of paper. By then, I think he had moved to another station and I could no longer watch his show, nor comply with his request.

In fact, my last memory of Soupy — before he re-emerged on game shows and such, and seemed to be catering to adults — was an episode of his Saturday show when he was planning to blast off in a rocket shop.

I don’t know if this plot device resulted from his show having been canceled, or moving to a different city, or if he was staging a hiatus with a cool NASA theme. All I remember is, at the end of the episode, he boarded the rocket and, remarkably for Soupy, whose schemes didn’t always pan out, the rocket lifted off. He blasted off for his visit to outer space — or that’s what the no-frills visual effects implied.

And he was gone. My friend Mike kept razzing me, “Soupy Sales went into space today!” Though I didn’t get the joke. I already missed Soupy.

But as a grown-up with many decades lying ahead for him, he left me with a priceless lesson that day: It’s OK to be goofy and resist outgrowing it.

I think, in Soupy’s honor, I need a pie. Custard or banana cream?