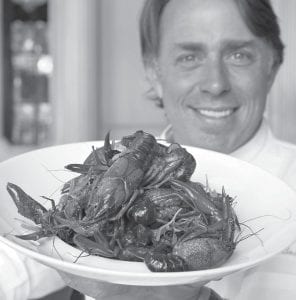 Chef John Besh holds the “French Crawfish Boil,” which includes Spanish tarragon and Tennessee truffles in his New Orleans restaurant, August, Tuesday, April 27, 2010. Southern cooking, once thought of as a cuisine in which everything was fried, or overcooked, or soaked in gravy or full of fat, has taken on a new luster and sparked a growing interest. (AP Photo/ Judi Bottoni)

Contemporary southern cooking is getting a taste of something fresh— respect.

Even above the Mason-Dixon Line, the food of the South no longer is about fried chicken and barbecue cliches. It’s a celebration of local, vibrant produce and carefully raised meats; of exotic ingredients like collards, okra, pork bellies and grits; and of traditions and cultures as deep, varied and flavorful as the foods.

“The South has always been cyclically hip,” says John T. Edge, director of Southern Foodways Alliance. “But now it’s become a permanent condition. America is coming to appreciate the range of culture and tradition in the South.”

That appreciation has made it possible to dine on great downhome food in places as varied as Oregon, Illinois and New York.

At Hungry Mother in Cambridge, Mass., for example, chef Barry Maiden serves up what he and his partners call “contemporary American” food. The menu sports cornmeal-dredged catfish and other southern classics that draw on Maiden’s childhood in rural southern Virginia.

“For a few years now I think southern cooking has become known as a serious type of cooking,” Maiden said.

That interest also has produced a flood of award-winning cookbooks and chefs that can do better than just hold their own against the rest of the country.

This year’s James Beard Foundation cookbook awards, for example. All three of the finalists for top American book are southern— “My New Orleans,” by John Besh; “Real Cajun,” by Donald Link; and “The Lee Bros. Simple Fresh Southern,” by Matt Lee and Ted Lee.

Food & Wine magazine will even devote its September issue to the region and its food.

“We’ve seen a huge rise in interest in the food of the South outside the South,” says Dana Cowin, the magazine’s editorin chief. “We’re seeing an expansion of ideas for southern food being adopted by cooks in other areas. There are people doing wonderful southern cooking in New York, in Boston, in Chicago.”

In many ways, the South has benefited from a growing national interest in local and crafted foods.

“A few years ago you used to go to the farmer’s market and everything was from Florida or California,” says Kathleen Purvis, food editor at the Charlotte Observer and chairwoman of the James Beard Book Awards Committee. “Now it’s locally grown for the most part, and that is certainly a reflection of southern cooking, which is closely tied to the land.”

She also thinks the interest isn’t all that new, pointing out that Craig Claiborne was writing about the South during the ‘70s, and Joe Dabney won a Beard award in 1999 for his cookbook “Smokehouse Ham, Spoon Bread, & Scuppernong Wine.”

In explaining the appeal, Edge points to the variety of southern cooking, which includes Cajun, Creole, soul and seafood.

“It ’s an area comparable in size to Western Europe,” he says. “And it has the same range of cultures.”

Television also has played a role, giving voice to advocates such as Paula Deen and her sons, Jamie and Bobby Deen, who have launched their own shows and cookbooks.

The scattering of southerners across the country that has taken place in recent years— some forced by Hurricane Katrina— may also account for some of the spread of down-home fare.

“I used to take the pimento cheese sandwiches my mother made for my lunch, the red velvet cakes for my birthday, the grits for Sunday breakfast for granted,” says Bon Appetit magazine restaurant editor Andrew Knowlton.

Moving north made him appreciate the rich culinary traditions of the South, says Knowlton, who grew up in Atlanta.

“When chefs started focusing on local food, the South was a natural place for them to focus,” he says. “Both in terms of flavor and tradition.”

Because of that, Knowlton says he now can get such southern delights as boiled peanuts, deviled eggs and his beloved pimento cheese in cities from Portland, Ore., to Portland, Maine.

“And you practically can’t find a restaurant now that isn’t serving Anson Mills grits,” he joked, referring to the Charleston, S.C., company that specializes in heirloom grains.

Besh, one of the contenders for this year’s Beard award, says he sees the interest as a sign that the country’s culinary appreciation is maturing, that Americans all over are taking pride in the nation’s various cultures.

“We’re finally comfortable with where we are as a country,” he says. “We are more open to the traditions in this country now, and the South has remained true to those traditions, especially its food traditions.”

Those traditions are celebrated at the Southern Foodways Alliance, the goal of which is to “document, study and celebrate Southern food cultures,” according to Edge.

“The South has always been close to its roots,” he says. “There is a food tradition here that continues and is celebrated.”

Southern food also has some advantages, including a longer growing seasons and a tradition of using local ingredients, according to the Lee brothers, who won the American cookbook category in 2007 with their book, “The Lee Bros. Southern Cookbook.”

“Southern cooks have traditionally lived close to the land,” says Ted Lee. “People say we’re trying to bring a California infusion to our food, but we’ve always used fresh ingredients and fixed them to emphasize flavor.”