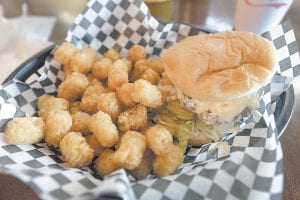 This photo shows a hamburger and tater tots at a restaurant in Charlotte, N.C. Deep-fried foods may be causing trouble in the Deep South. People whose diets are heavy on them and sugary drinks were more likely to suffer a stroke, according to a new study. (AP Photo)

Deep-fried foods may be causing trouble in the Deep South. People whose diets are heavy on them and sugary drinks like sweet tea and soda were more likely to suffer a stroke, a recent study finds.

It’s the first big look at diet and strokes, and researchers say it might help explain why blacks in the Southeast — the nation’s “stroke belt” — suffer more of them.

Blacks were five times more likely than whites to have the Southern dietary pattern linked with the highest stroke risk. And blacks and whites who live in the South were more likely to eat this way than people in other parts of the country were. Diet might explain as much as two-thirds of the excess stroke risk seen in blacks versus whites, researchers concluded.

People who ate about six meals a week featuring these sorts of foods had a 41 percent higher stroke risk than people who ate that way about once a month, researchers found.

In contrast, people whose diets were high in fruits, vegetables, whole grains and fish had a 29 percent lower stroke risk.

“It’s a very big difference,” Judd said. “The message for people in the middle is there’s a graded risk” — the likelihood of suffering a stroke rises in proportion to each Southern meal in a week.

The federally funded study was launched in 2002 to explore regional variations in stroke risks and reasons for them. More than 20,000 people 45 or older — half of them black — from all 48 mainland states filled out food surveys and were sorted into one of five diet styles:

“They’re not mutually exclusive” — for example, hamburgers fall into both convenience and Southern diets, Judd said. Each person got a score for each diet, depending on how many meals leaned that way.

Over more than five years of follow-up, nearly 500 strokes occurred. Researchers saw clear patterns with the Southern and plant-based diets; the other three didn’t seem to affect stroke risk.

Fried foods tend to be eaten with lots of salt, which raises blood pressure.