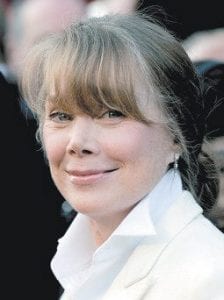 Sissy Spacek has lived within the Appalachian mountain range since before the role in “Coal Miner’s Daughter” that identified her with the region. But some of her neighbors won’t let her forget she wasn’t born there.

Spacek spent a considerable amount of time in Letcher County during the late 1970s during the filming of “Coal Miner’s Daughter,” the Loretta Lynn biopic which co-starred Tommy Lee Jones.

She lives within the Great Smoky Mountains, moving there in the 1970s with her husband Jack Fisk, who is a Virginia native.

Spacek may get more respect from her neighbors with her work narrating “Appalachia: A History of Mountains and People,” a fourpart documentary that debuts on PBS stations, including KET, on April 9.

She won an Academy Award for her role as singer Loretta Lynn in the 1980 film “Coal Miner’s Daughter.” It made her a natural choice for filmmaker Ross Spears when he was looking for someone to tell his story.

The film tells the human stories about people who made the Appalachians home, but also talks about the mountains themselves. They’re the world’s oldest geologically and are rich in growth. One acre of forest in the Great Smoky Mountins can support more species of trees than all of Europe, the film says. The coal so valuable to the region’s economy was created by tropical jungles compacted over millions of years.

It was an educational experience for Spacek.

“I learned a lot and a lot of the things made me very sad,” she said. “The most sobering thing for me was the monumental loss of mountains,” leveled during the mining process. She said the most moving part of the narration was reading the names of 20 or 30 of the 470 mountains lost.

For decades, images of Appalachian poor have been ingrained in the public consciousness. It can be a touchy point for people who live there; Diane Sawyer’s ABC News special about poverty among young people in Kentucky struck some raw nerves.

Spacek found striking the extent to which people who lived within the Appalachians rarely benefited from the riches extracted from the mountains.

“They’ve been exploited,” she said. “A lot of the poverty is because people have been exploited. I don’t think there’s any shame in being poor. The shame goes to the exploiters.”

For true authenticity, Spacek joked about doing the narration in her Loretta Lynn voice. The two women are still in contact.

“We’re very dear, dear friends,” she said. “We don’t speak often enough, but we’re in regular contact with each other. Now she would have really been authentic.”

“Appalachia: A History of Mountains and People” begins Thursday at 10 p.m. on KET.

Scientific anecdotes about the nature of the region help viewers appreciate Appalachia as an ecological treasure; one acre of cove forest in the Great Smoky Mountains supports more species of trees than all of Europe. It’s even believed that trees first evolved here 200 million years ago.

The series utilizes the expertise of numerous Kentuckians to weave its tale. Serving as consulting producer was Paul Wagner, currently at work on the forthcoming KET documentary “Thoroughbred.” Others include Carlisle native Barbara Kingsolver, the author of Prodigal Summer and The Poisonwood Bible; Loyal Jones, founder of the Appalachian Study Center at Berea College; the late Tom Gish, editor-in-chief for more

than 50 years at The Mountain

Eagle in Whitesburg; Ron Eller, director of the Appalachian Center at the University of Kentucky; and writer and UK professor Gurney Norman. Appalshop of Whitesburg is also a major contributor.