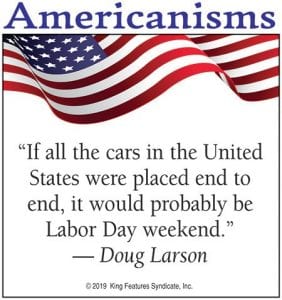 Two Saturdays ago I had the most fun I’ve had in my whole life when I attended the ‘Rob-Run’ in Whitesburg. I hope there are more to come. I like seeing hotrods a lot better than I do motorcycles. The ‘bike nites’ are nothing compared to the Rob-Run. I am one hundred percent behind the hotrods. I believe it could bring major money into our economy if we started hosting more events like this. It was ten times better than Isom Days.

I tried three times to call the pastor of a certain church to ask him to pray for a family member. He didn’t answer a single one of the three calls. Finally I got a preacher friend of mine to call him about one minute after my third call and he picked the phone straight up. So you tell me that preacher isn’t screening his calls.

To the new drug house in Haymond: The Eyes of Texas are upon you.

Revelations 12:9 shows serpent and Satan are the same. The tree of the knowledge of good and evil was talking about Satan, which they were not to have anything to do with. What Adam and Eve did was not taking a bite of an apple. Satan lied to Eve. Adam and Eve both participated with Satan in the acts that would open their eyes to carnal knowledge. Afterwards they covered and hid themselves where they had sinned with fig leaves. Eve told God that Satan had beguiled her, which means seduced. They were put out of the Garden. In Genesis 3:16, God told Eve her conceptions would be increased. She had two babies by different fathers, Satan and Adam. In John 8:44, Jesus linked Satan, the first liar and the father of it, with Cain, the first murderer.

Imagine for just five seconds the screaming and belly-aching that would break out among the Republicans, especially Fox News and the other right-wing media, if our country’s first black president, Barack Obama, owned hotels and golf courses and used them to rake in more than one-million, six-hundred thousand dollars from the Democrat Party and similar types who paid to use said hotels and golf courses. The GOP and their supporters would be screaming for Obama’s impeachment if that were the case, yet they are OK with Donald Trump already earning that much money from his political party and supporters. What hypocrites. And remember when Trump and the right-wingers were screaming about Obama playing golf? I guess we shouldn’t be one bit surprised that those same people have said not one word about Trump having already spent more than one hundred and ten million dollars in taxpayer money to finance his weekly excursions to golf courses and hotels he owns. By the way, did you know that Trump played more golf in his first year in office than Obama did in his eight years in the White House? Here’s a fact for you: Trump has spent more on golf alone in less than three years in office than Obama and his family did on all the vacations combined he and his family took during the two terms he was in Washington. Nothing sickens me more than hypocrisy.

This is the woman responding to the fellow at the Twin Bridge. I read your reply. I will be by Friday or Saturday to see you. I’ve wanted to talk to you for a long time. I’m really crazy about you. I will be there. Thank you.

To the TVS Cable Company: We are getting tired of looking at cartoons, sports, and old pictures just over and over and over. I believe they can do a lot better than that for the price per month.

(TVS Cable carries pretty much the same programming as every other cable company in the United States. Your complaint should be with the companies that own the individual channels that provide the content cable companies are left to carry.)

In reading the article about the meeting where Carroll Smith addressed the Letcher Fiscal Court, Mr. Smith does not tell that he lets his horses roam and tear up everyone else’s property. This road should not be shut down. It is a public road and a car can travel it.

Concerning the Blackjewel miners, I was for them one hundred percent, but over here in Cumberland they have turned it into a pure circus. That’s all it is — a circus. I’m getting to where I am ashamed. These men need to get off their hind-ends and get out and get them another job and wait until they get this settled. Then the money that is owed them will come in handy when it is settled. They are just fighting a losing battle, sitting up beside the road. They’re not gaining one thing besides handouts people are giving to them.

(Something tells us you would be singing a different tune if $4,000 or so in pay was unscrupulously jerked out of your bank account and your account was left overdrawn after you had already written checks for the monthly bills. Also, it’s hard to see how the miners are fighting a losing battle, given that some of their demands have been successfully met by state and federal governments.)

I believe the Blackjewel miners are about ready to give up. The crowd is dwindling and all they are doing is standing there waiting on people to bring stuff to them. I wouldn’t act like that if I were on starvation. And don’t they know this company is going to sue them for this trainload of coal that is sitting up here? They will be the ones who are in trouble.

Guess what? You two are messed up, bad. Your main meal tickets are gone. They are dead. What are you going to do now? You’ve messed over so many people that no one is left to have anything to do with you. The people you used to get ahead with their money have turned out to be smarter than you are. I’ve been dancing all evening. What are you going to do now — go to the food bank?

Well, she’s gone now. That clears the way for you all to be together. You don’t have to sneak around anymore.

I read in a recent edition of the paper where some people in the food stamp office got caught up in some fraud charges. I just wonder how many other government offices have fraud in them. I’m just waiting to see some more names pop up anytime. Thanks to computers, anything can be traced down these days.

Instead of paying for that twelve-hundred dollars an hour or more to fly that helicopter around looking for little bits of marijuana, why don’t the Kentucky State Police and National Guard spend that money on the ground and let the deputies bust those meth heads? It would be easy to find out the source of the meth. The Colson area needs to be cleaned up.

God bless America and thank you, Mr. President. When we put you in office we knew you would straighten this here nation out — get us back on our feet. All we are hearing from the Democrats is recession, recession. Mr. President, if we thought there is going to be a recession we wouldn’t have put you in office. That is why we put you in charge. And China? You know how to handle them and all the other countries that come against America.

Dear Speak Your Piece: I heard through the grapevine that a woman from the area overdosed and died over the weekend. I sure hate that for her father. Donald Trump has been raising hell about the fentanyl the Chinese have been sending over here. I sure hope she didn’t get hold of that poison.

To the communist who said I was a Donald Trump fan: I am not. Actually I am for Andrew Yang if he will get out of the Democrat Party and become an independent. I know that Bill and Hillary are going to be real surprised when they get theirs. It’s coming. I know a Hillary lover wouldn’t watch Fox News, but if they did they would know federal charges are coming against Hillary and her friends, especially the ones who started the collusion case against Trump.

Grandma, you best not leave your grandchild in the car too long while you’re out dealing drugs. These phones have cameras and we can take pictures.

The God of the Old Testament is arguably the most unpleasant character in all fiction: jealous and proud of it; a petty, unjust, unforgiving control-freak; a vindictive, bloodthirsty ethnic cleanser; a misogynistic, homophobic, racist, infanticidal, genocidal, filicidal, pestilential, megalomaniacal, sadomasochistic, capriciously malevolent bully.

This is the blue boy. Yes, you’re right, I hope it never happens again, but the Jenkins police were good to me when I knocked that telephone poll down. My insurance had to pay for it. Two years later they sent me another bill for $10,000. My insurance company checked it out and the statute of limitation had expired. I guess in a way you could say I won a small lottery. But good things happen to the blue boy, plus bad things, too.

Here’s what’s obscene — tRump grinning and giving a thumbs-up in a photo op with a baby who was orphaned by El Paso’s mass shooter. No one with any character could possibly support such a horrible person.

What happened to the days of having good high school football in Letcher County? It’s hard to watch Letcher County High School and Jenkins High School these days. It’s almost heartbreaking. I see the end coming for both programs.

To a certain blonde: We talked years ago about sharing a bottle of Bacardi coconut rum. That rum sounds pretty good to me right now. If you still want to share that bottle, just let me know when and where. The offer still stands.

We the people of Dry Fork would like to know what kind of church buys a bus with the members’ donations and then lets people ride it for their personal use.

To T.C., spirit woman. I hope this message finds you in good health and spirits as do I always. We both know that we have a wonderful, special sharing thing that no one else will ever know about. That day that we both were in the checkout line at the Dollar Store our eyes met in a long, drawn-out stare, and your beauty was so very captivating. I love you and am looking forward to being from the window down below to the front porch up above. Big smile. I’ll be looking forward to us being in our special place where nothing exists, out of harm’s way. I.L.Y.