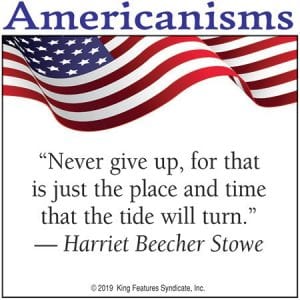 The City of Jenkins Police Department needs to leave city police cars parked in city parking and take away their gas cards to help save money. It’s not for private use as they do. You see them parked standing and talking on taxpayers’ money. The fire department uses the side-by-side and Jeep so an officer can have a ride for personal use.

Well, I hear the long black-haired gal is going to get married. I would just like to tell her that I sure did have a lot of fun with her. We went a long way from here and traveled many states. I sure am going to enjoy the company I had with you. But all I can say is this: You are a good person; you are a good girl. I just want you to know I sure did enjoy the time we had and all the things we got to do. I just hope you have all of your oats sowed. If not, I guess I may be seeing you around.

I was highly impressed with Mayor Pete Buttigieg’s performance in last week’s Democrat Party Presidential Debate. It’s good to hear from a clean-cut young man who speaks well and seems to be very intelligent. He has a good grasp of the issues facing this country. He served in the military in Afghanistan, which gave him a firsthand view of the conflict there. He’s younger than most candidates, but the same was said about John F. Kennedy when he ran for President in 1960. I think a younger person’s energy and enthusiasm would be just what the country needs at this time. We don’t need out-dated approaches to problems from candidates in their seventies. So start following the news concerning Pete Buttigieg; you’ll be hearing a lot about him between now and November 2020. Thank you.

I would like to know where the school superintendent is in Letcher County. One thing I wish she would do is stop this bullying in the schools. Children cannot learn while being bullied. I think that should stop. People have a hard enough time sending their children to school to begin with.

I was at the Whitesburg hospital a few weeks ago and saw two women who were beaten up so bad they couldn’t walk. A lady there had to take them away somewhere so people wouldn’t look at them. A woman should not let a man beat her up like that. She should shoot him between the eyes first. A man who beats a woman up is no man; he’s a mouse.

(With all due respect, please don’t disgrace a male mouse by comparing it to a ‘man who beats a woman.’ Mice aren’t nearly that despicable.)

To a certain man going around mowing grass and cutting weeds with a Weed- Eater: You are real bright; don’t you know that winter is here and grass-cutting season is over with? Man, you have no sense whatsoever.

( You may want to rethink your argument. Grass generally does not stop growing in Kentucky until mid- November, or whenever the daytime temperatures are consistently below 50 degrees.)

How can judges rule that someone who wants a green card and is not a citizen can receive food stamps on your tax dollar?

I thought we elected Mickey Stines as a good sheriff, but I’m a 75-year-old woman, and since back in April there have been people coming to my house after dark and getting on my roof and sleeping. They are also out in the yard, probably doing drugs. I have called him; I have called state police, and no one will do anything about it because I’m an old woman. Well I went to Pikeville to prove I don’t have Alzheimer’s disease. I took all the tests. Bye.

Democrats are throwing a bigger fit than my three-year-old grandchild.

So you heard it from the horse’s mouth, did you? Well I’ve got a question: At which end of that horse were you standing?

I’m writing to encourage all coal companies to give their miners the day off when our president visits Kentucky so they can thank him for getting their jobs back. Also, the rally should be held in the biggest football stadium in the state so they can have room.

People keep complaining about our new magistrates. The only thing I’m thinking is that at least two of them have two or three other jobs. The one in Jenkins has about four jobs. The one at Mayking has two jobs. Both of them are super-nice guys, but they should do one job and do it right.

(Under Kentucky law, magistrates in Letcher County and elsewhere only have official power when that county’s fiscal court is in session — or about a couple of hours each month. In other words, the office of magistrate in this commonwealth is legally defined as a part-time job.)

Hey, I live in an apartment and we have about seven cluckers. It’s a gang of old women and they control the whole 26 apartments, including the manager. I want something done about this or I am going to call the FBI in. Thank you.

I need to know something. I don’t know what language it is, whether it’s a bird or a dessert or what it is, but explain to the common man what a ‘quid pro quo’ is. When I first heard it I thought they had called me something for a minute, but I wasn’t sure. And I still don’t know what it is. So if you can fill us regular people in that it would be a big help to us. Thank you.

(The Merriam-Webster Dictionary defines ‘quid pro quo’ as a Latin term meaning ‘something given or received for something else.’ The Oxford English Dictionary says ‘quid pro quo’ comes from the 16th Century and means, ‘One thing in return or exchange for another; tit for tat.’)

There’s a person just inside Walmart who is meeting with anyone who has questions about health insurance during this enrollment period. I think this is a very convenient way to get knowledge about different policies for people who want to find what they may need at the best price. I think it is helpful not to have to call different insurance people and have meetings with a lot of people to find what information you need.

(Page B2 of this edition of The Mountain Eagle also has some helpful information about the enrollment period.)

. I heard a preacher mention the rapture this morning on the radio. I have heard that 95 percent of the churches teach it. It is also known as the fly away teaching. It began with an invalid woman, Margaret McDonnell, in 1832 in Scotland. She had a dream that Jesus could come at any moment. She told some preachers about the dream. They searched the Scriptures and came to the rapture belief. However, they believed that only the very saintly saints would be raptured up to heaven. God would know this belief would come into being, so He had something to say in Ezekial 13:20. ‘I am against your magic bands with which you hunt the souls like birds, and I will tear them from your arms, and I will let the souls whom you hunt go free, the souls like birds.’ Read Genesis 11:1-9 about another false way of going to heaven.

Is it just me or does anybody listen to ‘The Swap Shop’ in Letcher County and similar programs in other nearby counties and hear the same fellow — it’s 3747, I’ll say that much — with his world-renowned hunting dogs, I mean with paper lines plumb back to England. This is the luckiest man in the world to get ahold of dogs like this or he is the biggest liar who has ever opened his mouth.

Mexico is kind of like America, isn’t it, catch and release? Except there wasn’t as much bloodshed, thank God, here in America. El Chapo is probably laughing in his cell and is so proud of his cartel. Mexico is run by cartels, and the only way you get rid of cartels is you kill them. You wipe out the foundation — you start at the top and you go to the bottom, and that takes care of that business. A country cannot be run the way Mexico is being run and be called a country. It’s a swamp; it needs drained. God bless America. Our military knows what to do with that bunch of people. Thank you, Mr. President, for protecting us. That could happen in America if the Democrat Party gets in.

I find it awfully funny that a certain football coach from the county school system wanted to coach at Jenkins when all he has done is say negative things about the Jenkins High School and Middle School football teams, knowing the Letcher Central staff will not let him coach there. My advice to him is to either stay where he is or sit in the stands with us. Thank you.

It’s the first day of muzzle-loading season and you deer hunters are out looking for your deer. You go up into the head of Doty Creek and to the head of Carbon Glow and you find no deer. You know why? It’s one big coyote population. I’ve told you hunters that if you had sense you would go out and kill the coyotes.