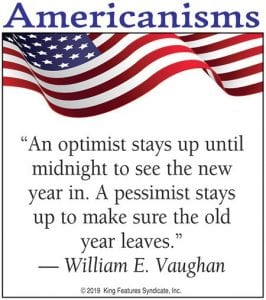 Mr. President, I know you have your basket full of troubles and stuff with this Democrat Party. But you see a lot and you know a lot that the Americans don’t, but these nations starving children — there should never be a hungry person on the face of this earth. Why don’t the nations come together and feed these starving people? It’s a sin, Mr. President, that we don’t feed these starving people around the world. It’s genocide and we know it, Mr. President. We can fill their bellies; we can give them medication; we can heal these nations with the help of God, Mr. President.

(Thank you. We hope you have a Merry Christmas.)

Say you want a revolution? Well go through with this vote. Try to put the president out of there and see what happens in the United States of America. Democrats, what President Trump did is a misdemeanor, not a felony.

Mark 10:17-25 is about a wealthy man who must have gotten his wealth in wrong ways. Jesus quoted the laws about lying, stealing and cheating and told the man he had to get rid of the wealth to follow him. After this, Jesus talks about the eye of the needle being like what the rich man faced. It is about the way a night traveler could get into a city where there are few guards on duty and the large main gate was closed. They had to unload the camel so it could crawl on its knees through a small door in the wall.

Memo to those of you who don’t like NPR’s reporting on the president: Studies have shown that NPR listeners are the best and most accurately informed audience of all news gatherers. If you want good news about the president, next election you should vote for someone honest, intelligent, experienced, and caring, not an overgrown spoiled brat.

I believe I’ll contact Jeff Foxworthy and bring him to Letcher County. He would have a blast with the four dummies who thought they could get away with making drug transactions from the emergency room area at Whitesburg Hospital. Dumber than dirt is what you are. You showed your true colors. The young lady needs to be sent away if she’s found guilty; she’s had enough chances. This is pitiful. And to the jail inmates who used the meth: As Jeff Foxworthy would say, you may be a redneck if you sniff junk another man hid in his trunk.

Every time you drive by the Doty Creek Old Regular Baptist Church, night or day, there is always someone sitting there waiting to do a business deal.

The one thing that puzzles me the most about what some people say about President Trump is that he is not helping the miners here in eastern Kentucky. Did he do something in Pennsylvania and West Virginia to get their mines going and refused to do it here? Is he supposed to come down here and take people by the hand and lead them to do something that people have been doing here for more than hundreds of years — that is, opening up mines? The cuts in the coal industry have much to do with the competition from natural gas and the coal seams being worked out.

No one is coming for our guns. Becoming a sanctuary county is just a xenophobic scare tactic that is being used to manipulate you.

. We get enough propaganda from the mainstream media and Congress people without having to hear it from local people.

Some of the reasons why I left the Democrat Party after more than 50 years were lies, corruption, and some so-called safety net policies that produced nothing but poverty, broken homes, fatherless children, false hopes and despair, and not being able to say Merry Christmas without a fight. The corrupt leaders of the Democrat Party have also used school children to support their views on abortion, gun control, climate control and other issues. And today I see the Democrat long arm of lies and corruption has infected the FBI, CIA, court system, and other local and federal agencies. God help us. Merry Christmas, everybody. Thank you.

Did Don’s Super Saver ever get reimbursed for all the bad Blackjewel checks?

Impeachment has come and gone. Donald Trump is alive and well. Thank you.

Certain stores need to watch who is allowed to hang out there if they don’t want to lose business.

I would like to know why the woman down at Blackey got pardoned for killing my little nephew. My boy got locked up for robbing a bank. He gave the money back after they made a deal with him, but then they reneged on the deal. And then they let her out of jail? That’s not right.

What are the members of the Trump cult going to do after their hero succeeds in turning our country over to Putin and Russia? You would have to be deaf, dumb and blind not to realize that Comrade Bone Spurs is a Russian agent doing all he can to help Putin sow chaos and division across the United States of America. I’ll hand this to Trump and Putin and their communist-sympathizing sycophants including Moscow Mitch and Rand Paul, they have done more in only three years to destroy freedom and democracy in America than the old Soviet Union was able to do during the entire 45 years of the Cold War.

I want to tell you why we didn’t get justice in Letcher County in the Forrester Caudill murder case. Kathy Walters Williams and her boy were rats at the time she murdered Forrester. And to Matt Bevin: You can go straight to hell for letting her out of prison.

Hats off to George Conway, a true conservative, for stamping the name # IMPOTUS on Donald Trump after our most corrupt president ever was impeached the other night. My only question to Mr. Conway, a true patriot if there ever was one, would be how in the world he can live in the same house as Trump’s obnoxious mouthpiece, Kellyanne Conway.

Just wondering: Is the Matt Bevin who just let hundreds of murderers, rapists and child molesters out of jail the same Matt Bevin who President Trump and his followers were cheering madly for during a rally held at Rupp Arena in Lexington just before the November election? And weren’t U.S. Senator Mitch McConnell, State Senate President Robert Stivers, and other high and mighty Republicans at that same rally and also cheering madly and telling us how our state would not be able to survive without a great man like Matt Bevin remaining in charge?

For Christmas I’d like a president who cares more about school shooters than playing golf.

To Matt Bevin: What if your kid got killed by a woman who was a drug addict? Would you still pardon her? Hell no, you wouldn’t. I’ll see you in hell, Matt Bevin.

I’m calling about a guy who was picked up after meth was found on him after he was pulled over for having wrong license plate on the vehicle he was driving. Someone asked in Speak Your Piece if the charges were going to stick or go away. Well, he has a big time lawyer and I think the charges will go away.

The quickest way to lose a lot of friends is to put a bunch of political B.S. on Facebook. That’s a bad way to lose friends and four-wheeling buddies, simply because you listen to your parents and they told you to be a proud Democrat. You are 20 years old and you haven’t researched the facts and you don’t know what you are talking about. Thank you.

Well look who has put up a Christmas tree. It’s Mr. Scrooge.

As impeachment rolled closer, the remaining dregs of the former Republican Party in Congress stopped even trying to pretend they have any interest in the United States, the Constitution, or the American people. Only their army of Internet propaganda-trolls still give occasional lip service to that mealymouthed sophistry, and even they will admit, when cornered, that what they really stand for is their Traitor-In-Chief, not their country. One sometimes wonders about their drug of choice; is it meth? Crack? Are they sniffing Trump’s own industrial-grade methane? Forget it, it’s time we all stopped making excuses for the Trumpists in Congress; the reality is, they’re nothing more nor less than belly-crawling, back-stabbing, pathologically degenerate spawn from the same abnormal off-breed of humanity that resulted in a Donald J. Trump. Time to clean house — while we still have one.

In last week’s Speak Your Piece, someone commented about changing political parties from Republican to Democrat. How about you changing addresses, too? You’re the kind of stupid we don’t need in Letcher County. Thank you.

To a certain person I know who likes to make fun of me and talk about me behind my back because I’m handicapped: Everybody knows you do it. You are no better than anyone else. You like to make fun of other people just like you make fun of my mother when she is in the nursing home. You can’t judge people forever and get away with it. Just keep on judging me and my family; sooner or later bad things will happen to you and good things will happen for us.

I would like to comment on the young lady whose picture was on the front page of The Mountain Eagle, showing her smirking and laughing while she was at a hearing on serious drug charges against her: I think the court system needs to give her something that will wipe that smile and smirk off her face. That is so sad that she did that while her embarrassed mother was sitting right beside her. And to the mother: You are an old lady. What went through your mind to make you get mixed up in something like this? I don’t feel sorry for you or your possum-grinning daughter. As for the little fellow who was also in the picture, sitting on the back row with a head bigger than his neck, he needs sent off for help before he ends up starving to death.

I am just about done with this ATM here in Whitesburg. Every time you go to use the thing it is not working. If I can’t get my money when I need it then I don’t need you, either.