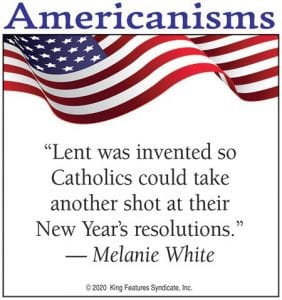 Now I see why Donald Trump is trying to take away our funding for the prison. We don’t need it. He’s taking the prison population down by pardoning everyone who is involved with him — all of his cohorts, friends and what not. So I can see why we don’t need a prison with all the other well-paying jobs we have here in eastern Kentucky.

Hello, Betty, and hello, Peggy. I hope you all are doing fine.

By the way, the story of the three men on the night they were talking about a shooting; there was a fourth man. This town couldn’t solve a crime if it wanted. The fourth man came and picked up the boy. He came and picked the boy up in his truck and sat and witnessed the whole thing. It wouldn’t take Matlock to solve this mystery.

(Actually, the airport board just last month received a $650,000 grant to purchase 600 acres that would be part of the new airport, an occurrence that has to be considered a major step forward. By the way, do you really mean to criticize community members who volunteer many hours of their time over several years to work on behalf of our county?)

The House of Representatives passed an amnesty bill for about three and one-half million immigrants. I don’t suppose you mind your tax dollars helping pay for their health care and, in many places, their schooling.

I’m real sorry to hear of so many deaths lately. Starting Bobby Ray Day, Tom Callihan, Alfred Gibson, Sue Sturgill’s husband, Kathy Day, Kelsie’s wife, Della May Maggard, and several more relatives in the last month or so. You did not print the listing of birthdays. I had the month of February of family and friends. So please print this? Okay? Thank you, Mr. Stanley Pack

Could someone explain to the Speak Your Piece readers what the difference is between Rod Baglojevich did in selling Obama’s old Senate seat and what Harry Reid did in buying votes for Obamacare with gifts for members of Congress to take home to their state?

(Soliciting and accepting bribes, which is what ex-Illinois governor Baglojevich did, is a felony crime. Logrolling, which is what former Senate Majority Leader Reid did and all others in his position have done throughout the history of the United States, is not a crime.)

I just have one question. I saw where a lady turned her two pit-bull dogs loose the other day and one of the killed a guy. They charged her with murder. If it turns out the young person in Knott County was killed by a coyote are they going to then charge the Kentucky Department of Fish and Wildlife with murder? They are the people who turned the coyotes loose; it’s the same with the bears. Something needs to be done. There are too many coyotes populating this area.

(The Kentucky Department of Fish and Wildlife Resources did not introduce coyotes to eastern Kentucky. They arrived on their own, first migrating to the Midwestern and Northeastern United States in the late 1930s and eventually colonizing in Kentucky in the late 1970s.)

I’m calling in regard to the garbage up here in Marshall’s Branch. One certain lady — and I’m sure she knows who she is — is a disgrace to our community. Why doesn’t she and the man she’s living with get out and clean that garbage up? A person living above her is in the same situation and is also a disgrace to this community. The county judge needs to come check on what these people are doing. They’re making public garbage dumps right in their yards. We need some help here. Thank you.

It’s amazing how many church parking lots are used for drug dealing on Thursday, Friday and Saturday nights.

To the person who commented in Speak Your Piece about not being friends anymore: You knew he was married and that he wasn’t leaving his wife and his family for you. What were you thinking? You were trying to wreck a home. I mean, get real, girl.

A certain guy who does work in Whitesburg can’t get along with anybody. Once or twice a week he says on Facebook, ‘That’s it; no more drama. I’m getting off here for a while.’ Two days later he’s back on there again arguing with someone else about politics. Dude, if you’re not happy just cancel your Facebook account and move on. Thank you.

If a certain principal thinks he is going to bully every teacher he has another think coming. You better check yourself, son. That’s all I’ve got to say to you. You need to straighten yourself up and start treating other people with respect. You are nothing.

Mr. Trump, what have you done to America? We have record stock market growth, record economic growth, record wage growth, record low unemployment, energy independence, a more secure southern border, and the appointment of more than 160 federal judges who are constitutionalists, including two on the Supreme Court. To Mr. and Mrs. Democrats, you can’t beat Trump’s record. There’s not a president in the history of the United States of America who has done what this man has done in three years. Put that in your crack pipes and smoke it. And quit rattling my chain.

Dear Speak Your Piece: I heard our state government is working on legalizing marijuana for medical purposes. If it’s going to be legal, it needs to be legalized in all forms, and that includes smoking it. Why would people like our state Senators and House members put such a limit on something they know nothing about? They need to turn it loose and let the markets handle the rest. That’s all that needs to be done; not taxing the life out of the business, which will be next.

Has anyone investigated Mike Bloomberg to see if he made all his billions legally? He had a lot of funds coming in from the government. And didn’t Bernie Sanders honeymoon in Moscow?

I was hoping by now they would start exposing these lying preachers, whether they are on TV or are next door. The Lord is going to get them for that lying and for charging people money. The Bible says preach without charge. Have a nice day.

Donald Trump needs to get his act together and get the trade agreement with China finished so we can get money our of our recyclables again. We poor people who get out here and collect aluminum cans and scrap metal are suffering right now. You can’t haul enough to make any money now, and it’s all because of the trade war.

I do believe it’s a shame when neighbors call themselves Christians and then start drama on social media over cats and dogs and then bring up the names of other people’s children and grandchildren while doing so. Well I’ve got news for them: They think their grandson is a saint, but he’s not. He’s always in trouble at school. Before they start casting stones they need to read the Bible where it says ye who is without sin. Christians love their neighbors; they don’t talk about their grandchildren.

I went by Wendy’s this morning for breakfast. Everything seemed to be really good, but there was one thing wrong — they need to serve just a little bit more food. Everything they were serving looked like kids’ meals.

Something to think about is why people think that Mexicans have taken their jobs. I heard a guy this week complaining that Mexicans took his job from him, and he worked at a Ford manufacturing plant. I told him they didn’t take his job; his company got tired of paying their employees $24 an hour plus vacations, sick pay, holiday pay and bonuses, and the employees still wanted to strike. I guess they figured that if their employees were not satisfied they would send the work to poor Mexicans who would work hard for a lot less. Don’t complain about anyone taking a job when offered when so many people don’t want to work. I also hear Christians who condemn races of people God created. Do they not agree with God after all? I’m definitely not a church-claiming Christian, but if hating a person because of their skin color makes them feel better about themselves I guess God knows why. Abortion and AR-15’s do the very same thing — they kill — yet everyone wants and needs an AR-15 . It does no good to try and fool anyone when you pick and choose your least favorite sins.

All you hear anymore is news about missing and other young kids who are missing. You never hear of anyone doing anything about it. That’s all I have to say.