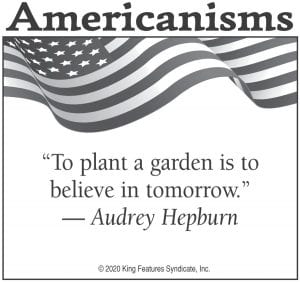 I am totally surprised — not! — to learn that President Donald J. Trump, our country’s great virus fighter and protector of people, has a financial interest in the drug maker Sanofi, which produces Plaquenil, which is the brand-name version of the drug hydroxychloroquine. It’s the same drug Trump and his buddies at Fox News have been promoting as the cure for COVID 19. No one has ever cleaned out the D.C. Swamp like Cadet Bone Spurs has. After all, he’s our wartime president and has limited this coronavirus ‘hoax’ to killing only 10,000 of our United States citizens. And this after telling us the first five cases would simply just blow away, because he and his experts had it ‘totally under control.’

We all know of a certain smart aleck EMT worker. A person like him with a smart mouth who talks bad about others ought to get the coronavirus. Then maybe he could learn to keep his mouth shut. He’s nothing but a troublemaker, and sooner or later somebody is going to put a fist in his mouth.

Some doctors are still staying open and seeing patients just like they did before this virus even started. How can they comply with all the rules the governor has set out and still see patients and not get within six feet of them?

(Since March 18 — at the request of Kentucky Governor Andy Beshear — our state’s doctors and hospitals have not been teaming to perform elective surgeries. Otherwise, physicians are essential workers who still need to see patients, as other health-related conditions, illnesses, maladies, and medical emergencies didn’t end when COVID-19 began. As for the six-foot separation rule, doctors either wear protective equipment or see patients via smartphones and computers.)

President Trump has now loosened EPA restrictions on the emissions and mileage standards for cars and trucks. If he has the power to do that, why can’t he come down here and help us in eastern Kentucky with the EPA restrictions on coal mines? The EPA is what keeps our coal mines down, but Trump doesn’t seem to even care enough to help us. So keep voting Republican.

Well, they had to use espionage to try to take him down, but nobody will know anything about it. That’s politics for you. He would have been re-elected if not for espionage.

To our Letcher County judge/executive: I thought you were closing the walking tracks and all that. Apparently the people aren’t listening, because they are still walking. And they all gather up, too. I see a group of 11 at one table. You’ve going to have to ask a deputy to go up there and keep them separated.

Nancy Pelosi says that every single dollar of this stimulus bill goes to help the people. Well that’s a little bit strange when $125 million goes to the John F. Kennedy Center for the Performing Arts, plus millions more to others that have nothing to do with the problem we have right now. It’s about expanding the government. They want to take some control over the airlines.

(The stimulus bill directed $25 million to the Kennedy Center.)

If our president, Donald Trump, were to catch the coronavirus and pass away, poor old Nancy Pelosi would be on television the rest of the year telling how much she loved him.

There’s a rumor going around that a private ambulance company is going to take over the Letcher Fire & Rescue’s ambulance service beginning the first of May.

We need a new garbage warden in Letcher County who will get this garbage cleaned up. We need someone like Frank Campbell.

Facts are like water putting out a fire. In the absence of facts, rumors spread like wildfire. Please tell us and write things that are informative as can be about whom and what and where and how and why — the basics of journalism. Not knowing is worse than knowing. People can deal with the known; but the unknown is terrifying. Help us to pull together. If a neighbor gets the coronavirus we understand, but if an unknown person gets it we are suspicious of everybody. Help us to get beyond suspicion; help us to grow together. In Jesus’s name I pray amen.

If you look up the word ‘idiot’ in the dictionary, you will find Adam Schiff ’s picture right next to it. And if you’ll flip over to where it says ‘stupidity,’ you’ll find the same picture. If his brain were an atomic bomb it wouldn’t be big enough to blow his nose.

This is just a little helpful hint for the parents of the children who eat the free lunches: If they can’t eat the whole servings of green beans, corn and carrots over a couple of days, then take what’s left, add it to some cabbage with celery, tomato juice, canned tomatoes, onions and potatoes and make a soup. I think that would give them another good meal for the week. If they children don’t want to eat the soup on a warm day, put it in the freezer and serve it on a cool day.

To a certain girl who used to say we were ‘friends with benefits’: Let me take you down memory lane, maybe around Fishpond Lake and a waterfall. Maybe even around a gas well. Does that ring a bell to you? I think it does, so I thought I’d just drop you a little line. Do you ever think about it? I do.

I hate two-faced, backbiting people who are always talking about people behind their back. The worst ones are those who go to church every Sunday — at a certain Old Regular Baptist Church — and act like such good Christians. You know what? I don’t even go to church, but I believe I would get through the Pearly Gates before she does. I live my own private life and don’t bother anybody.

I bet neither of those two deputies on the front page of last week’s paper has ever even seen a razor. They aren’t old enough to use a razor but they’ve been given a big Tech 10 automatic pistol.

To the mayor of Jenkins: I think you are not caring about your outside workers who pick up trash and fix the water and the sewer. They are the ones at risk today, and it would not kill you to give them an extra bonus for what they do. If not they will remember this at election time.

Just like President Trump said: Coronavirus, nothing to worry about. It’s only hit a quarter of a million people in the U.S. and has killed more than 10,000 now.

They tell everybody to keep himself or herself clean during the coronavirus scare and there are still people who won’t even take a bath.

A certain preacher who came here from another county was run out of one church over here and now he’s been outside Walmart preaching. I think he’s a hypocrite and they ought to send him back across the mountain.

On February 7 Trump sent nearly 18 tons of medical supplies to China. He had already been advised that the coronavirus could become a pandemic, not only in China but also in the USA. Our medical professionals have paid dearly for his incompetence.

The government is willing to bail out cruise ships with foreign flags who don’t pay taxes in the United States, but won’t bail out the U.S. Postal Service, which provides much needed service to us people across the country. Remember this when they let the postal service go broke and out of business.

Well, I’ve just been reading 1 Kings 18:27. The coronavirus is still around and these preachers have prayed and prayed like the Gods of Baal. But you know what? Elijah laughed at them and said maybe he’s gone to relieve himself, maybe he’s asleep. To ‘relieve himself’ meant he had gone to the toilet. So evidently all of these preachers are serving a god like that, because he’s a do-nothing god. Amen.

To all the people who put Trump down: When you get your stimulus checks this week, go ahead and send it right back to him. That way you can be a true believer in hating him like people do. If it hadn’t been for the Democrats you would have gotten your checks a week ahead of time. That’s all I have to say at this time.

(The stimulus payments expected to reach 140 million U.S. households are the result of the passage in Congress late last month of the $2 trillion Coronavirus Aid, Relief, and Economic Security Act — also known as the CARES Act. The bill was formulated during negotiations between leaders of the Republican-controlled Senate and the Democrat-controlled House and a team of White House advisors led by Treasury Secretary Steve Mnuchin. The measure was approved unanimously in the Senate (96-0) and by voice vote in the House, and was then signed into law by President Trump on March 27.)

Trump supporters will die believing in a lying overgrown child who takes every opportunity to be seen and bully everyone. Thank the Republican Party for keeping this idiot in office since January; when by all rights he should have been removed. One caller said in Speak Your Piece recently that if they got the virus they would kiss every Democrat. What in the world has caused so much ignorance with some of the Trump supporters? I have never been a lover of the color red, and that Chinese-red Trump hat will never touch my head. Good luck with trusting in a fool.

The Trump party has completely turned against capitalism and the free market. Trump has now spoken with his Muslim friend, the Crown Prince of Saudi Arabia, his communist friend, Putin, to substantially raise our gas prices.

Wednesday, April 1, 2020: Example for the people. What if Barack Obama or Trump, our president, said this: The moon up there that shines on us at night was going to fall out from the sky on a Sunday in the middle of Whitesburg. How many would believe the man or put their faith and trust in the Lord and stay still? Our president or Barack Obama did not say this, okay Thank you, Mr. Stanley Pack.

Remember years ago when the people got to drive real cars that were made of metal and you had room to ride in them and they were big and wide and the chrome was thick and shiny and the big motors would move on down the highway. The gasoline was cheap, and the roads were smooth. It was said that Henry Ford stated that he wanted to put a vehicle in every household, but then the greedy dogs came along and raised the gas prices, made plastic cars, and raised their prices so that only the rich and politicians could afford to buy a new car. Then came along Obama to destroy a good vehicle that any poor person would be glad to be able to drive because of his lie of global warming. I am glad we have a real president now that is going to roll back Obama’s foolishness, so hopefully now the poor will be able to buy a real new car for far less than these greedy automakers are trying to sell them for now.