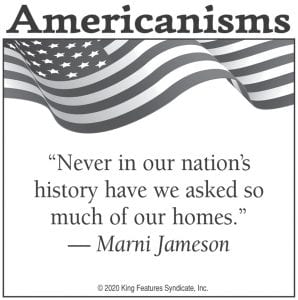 I watched one of those news conferences the other day. I looked at those reporters who were talking to the president, and the expressions on their faces spoke volumes. They looked like they were mad at the whole world. They had no sense of humor. If you just look at them it just explains itself. I hate it for them, because life is too short to be that way.

What’s on my mind is that I think everybody needs a divorce. It’s kind of like buying a car — trading an old broken down mule for a Maserati. It’s a lot better ride, more comfortable, and a lot better looking. See you later, old mule.

Jobs are being lost by the millions while my retirement account is being decimated. I wish we had a president who cared about jobs and the economy.

I would like to get somebody who really knows how to work and wants to work to wash down a house. If anybody is interested, please call 634-6755. Serious calls only, and you can’t be on drugs.

I hope that my bank, Whitaker Bank, will lessen or soften its fees when we are not able to get to the bank to put money in during this time when people have no jobs and most businesses are closed.

After many years as a customer at a certain barbershop, I will no longer get my haircut there after learning that the owner has been ignoring the state and local regulations and recommendations on shutting down during the coronavirus scare.

I would just like to say that if you can look me straight in the eye without blinking or turning your head and tell me that Joe Biden would make a great president, I have some oceanfront property over in Leslie County I would like to sell you.

Dear Speak Your Piece: Make sure your pharmacy has hydroxychloroquine and zithromycine. These two drugs are believed by many to definitely kill the coronavirus. If they don’t have these drugs, raise absolute hell until your pharmacy gets them. Talk to your doctor and tell him or her you dare them not to write this medicine if you get the coronavirus. China needs to pay us reparations for this plague or cancel any and all debts we have with them.

There’s one thing about me; I have never begrudged anybody making a dollar. But all these Trump haters hate to see Donald make a dollar. Joe Biden’s son made a fortune not from what he knew, but from being who he is. So people in office will make money from the power of being in office. It will never change. So get over it.

To the police in Whitesburg: Who is the bigger threat — the woman who claimed she had the coronavirus to try to keep from being arrested or the barber or beauty shop that continues accepting paid customers right under your noses, day after day after day? I would be ashamed if I couldn’t put a stop to a business violating the closure order.

I would like to tell all of those people who complain about Trump every day to send that stimulus check back to Washington when they get it. Just don’t spend it. If I hated him as bad as you all do I would send the check back.

I would like to ask about the little fellow who ended up losing his life after an apparent animal attack in Knott County. What happened with all that? We never heard if it was a dog attack or a coyote attack? We should be told what is running around in our woods.

I see a certain man is back in the mechanic business and has his garage back open. It’s a shame that people are out here working every day while they are also drawing Social Security Disability and SSI. If they can work like that on those vehicles they don’t need their check. Thank you.

Thank you, Ashley and Brandon Holland, for picking up the broken tree that fell into our yard and just missed our car. We really appreciate all your hard work. We love you. Poppy and Gran.

Mary Sue, it’s been 15 years since you’ve passed. I think of you every day and I’ll see you in my dreams. I love you. Your husband Ed.

Just watching the coronavirus news conference on TV today and saw our great President Trump have a total and complete meltdown on everybody while lying about the virus and when it hit the shores here. It just reminds me of how big a child that guy really is, and yet there are people out there who are silly enough to vote for him.

Trump now wants people to go back to work during this coronavirus as people are dying, but only because his company is losing money daily because of the quarantine. His hotels, country clubs and restaurants are not open and this really bothers him. But if you recall months back to early 2019, Trump shut the country’s government down and said how proud he was to shut it down. Thus thousands and thousands of workers were without a paycheck, lost good credit standing with their lenders, and they had no medical insurance. Now because it affects his own bank account, Trump is grumbling about the country being closed. He will throw everyone under the train to save his fat behind and his bank account.

How many of you readers have lost a loved one to this coronavirus or know someone personally who died? I have been wondering why President Trump acts like he isn’t afraid of it and doesn’t want to wear a mask or practice safeguards. I wonder if he and his buddies were immunized for the virus beforehand. Farmers have not had any crops moving for about two years and lost farms that have been in their families for decades because of tariffs that the Chinese don’t actually pay but the taxpayers pay (another Trump lie). Our ‘Apprentice’ celebrity president is more like a cult leader than anything and just like Jim Jones’s followers, some have drank the Kool-Aid. Four more years of Trump and his minions will be the death of us all.

Hey Kentucky Farm Bureau, how about a ‘shelter in place’ rebate for your customers like other insurance companies are doing for their clients?

(Kentucky Farm Bureau Insurance announced from its home office in Louisville this week that it will return a total of $21 million in dividends to its automobile policyholders and will cut auto premium rates in 2020 by $32 million. The company said it will soon issue a $25 dividend check for each motor vehicle it currently insures. Farm Bureau also points out that the $25 checks come on top of its decision nearly four weeks ago to temporarily suspend policy cancellations for non-payment of premiums.)

Trump brags that his press conference ratings are through the roof when 799 New Yorkers died in one day. He literally thinks this is a reality TV show called ‘Trump Pandemic’ competing with Monday Night Football and ‘The Bachelor’ finale. It is not possible to be a real Christian and support this man.

Once again, Speak Your Piece is filled with the lunatic spewing of pro-Trump people. Those bald-faced liars need to get the heck out of this country. Maybe Russia would be more to their tastes.

Everyone should use telemedicine and get a prescription for hydroxychloroquine, the medicine recommended by my president, Donald Trump. He says it can prevent COVID 19. What do we have to lose?

How many times have you heard preachers say ‘it’s the will of God’ or ‘God spoke to me personally’? Some even proclaim that the COVID-19 pandemic is God’s punishment for the sinful ways of humanity. I am really tired of hearing such silliness. The majority of preachers are most likely fine people, but I highly doubt they really know what God is thinking, feeling, or saying. Preachers claiming to have a direct personal hotline to God say some of the most outlandish things. For instance, proclaiming that every natural calamity is sent from God as ‘punishment’ for some disliked group’s supposed sins. I don’t believe any preacher or priest really hears God speaking to them. I also doubt that their prayers to God have any influence on the problems human beings undergo. Blaming Satan is one way some folks assign negativity to things they personally disagree with. I don’t buy the idea that there’s an entity called ‘Satan’ who causes illnesses, natural disasters, and accidents. Some things in life just happen, with no imaginary supernatural being pulling the strings. So the next time you hear someone claiming to personally know what God or Satan are up to, my advice is to use your common sense. Isn’t it possible those claims are just the product of wishful thinking and an over-active imagination? Think about it, and stay healthy.

I am a healthcare worker and writing a response and call to action of other healthcare professionals. The local fast-food worker who wanted to throw something in the face of the healthcare person in the drive-thru should be fired, and we all need to boycott that restaurant. That employee clearly shows how immature and ignorant they are. Also, we are the ones people like that run to when they are afraid and when they are sick or scared of having COVID-19. But we take the moral high road and take care of you and your families. Explain your actions and words when you face God.

. We the party of Democrats cleaned the Republican trash out of the governor’s office in Kentucky last November. And guess what? We are going to do the same to the White House this November.

You cannot buy rubbing alcohol in any stores right now because it has been taken off the shelves in order to cause the customers to buy stand-in products that contain a smaller and less effective amount of medical-grade alcohol and a higher priced substitute in place of rubbing alcohol. That is price gouging. Why is rubbing alcohol being held back at this particular time? It is in my opinion, price gouging.

They want you to buy a cheaper grade of germ killer product than the tried and proved germ killer — rubbing alcohol. God bless President Trump.

This is Harlan County Man. Does anyone think the Democrats care about the people here in our nation? If you do you are a fool. The fake news keeps lying about out great President Trump. He has done a great job handling the coronavirus here. The deaths will be much lower than they would have been because of President Trump’s leadership, and President Trump’s approval soars as the Democrats hope to replace Biden with New York’s governor, Cuomo, who sure can run his mouth but not our nation. And in reply to a previous comment in Speak Your Piece: Yes, we MAGA Republicans will cash our checks and spend it wisely. You do the same.