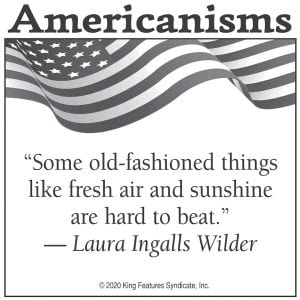 If you have a chance to put out a garden this year, keep in mind the vegetables that are now wasting in the fields without being picked. The list includes zucchini, cabbage, green beans, yellow squash, tomatoes and peppers. So if you get a chance, put these vegetables out in your garden. It will pay, because those are vegetables that will definitely go up in price. Everybody likes a bowl of green beans and tomatoes on a hot summer’s day.

Another first for our president: The most people unemployed since the Great Depression. No one else could have accomplished this. And all he had to do was wait two months before taking action on COVID-19 and then being dishonest and negligent since.

I am not getting my hair cut anymore in Whitesburg.

The virus only kills a few people, but if you’re one of those few people it’s pretty bad. They want to open up the country to keep businesses open so that businesses can make a profit even if a few people have to die. I guess dying is the American way.

By holding down on the sales of rubbing alcohol, the stores that sell prescription medicine are causing more sickness than they are preventing sickness. The Better Business Bureau should investigate these stores. They are harming people by not selling rubbing alcohol, which is proven medicine for everything.

I never been an outlaw and I never have been in trouble in all my life, and I’m 50 years old. But I’ve figured this out: You can do anything in the world here in Letcher County and be charged with a crime that can get you 14 years in prison, but if you tell them you have a drug problem they’ll send you to a rehab place and you’re not even locked up. So if you do something bad and you don’t want to get locked up, just tell them you have a drug problem.

After listening to my president’s coronavirus update I have to wonder how many of his supporters inserted a very powerful light inside themselves in an attempt to kill any possible virus they may have.

To a girl in the head of Linefork: Many years ago me and you sat many nights playing cards and you wrote one night during Hangman, I love you. Things kept us apart, but I did fall in love with you, even though our ages were different. I often think about what it would have been like to be with a wonderful person like you. So yes, I am still thinking of you. And yes, I know you have moved on, but I still would like to have just one day with an angel as precious as you. I will never forget you.

To Jeremiah’s elderly wayward wind of west to southwest: ‘Professional services rendered’ does not mean rent.

. I did not cut any hair, but I would like to sell some ocean front property I own on the Kentucky River.

Don’t worry about any flowers. You’re never going to see them.

People of Letcher County want to know what kind of shot was given to the prisoners when they were released when the COVID-19 cut loose. Thank you.

Trump says China lied to him. I thought he was the shrewd one who knew how to negotiate a deal. If you get lied to in a deal, that’s part of the deal. You are supposed to be aware of that. Trump has sucker written on his forehead.

(As of Tuesday afternoon, a little more than half of the stimulus payments had been sent to the 150 million Americans who are eligible. Hopefully you will get yours soon. If you have Internet access you can check ‘Get My Payment’ tool at irs.gov to check the status of your stimulus payment.)

To the good- looking women out there who are afraid to get away from their man even if he’s lazy and won’t work: All women say they want a good man. This is Clint. Send me a message in Speak Your Piece. You can meet me somewhere and then you can decide. Thank you.

Why have all the counties around Letcher County had COVID-19 testing for the past few days while we have had none? It’s probably got a lot to do with leadership.

God bless America. Mr. Trump, we thank you for what you are doing for America. We are in a bind. People can’t go to work without possibly killing another person. New York is just about destroyed from the coronavirus, as is the whole world. I’m as vulnerable as anyone to it, being 66 years old, but I still have to get out and do things. Nobody in my entire neighborhood has come to check on us.

Dear Speak Your Piece: Our governor ought to use his head and let the small counties in Kentucky — especially the ones like Letcher with five or less cases of COVID-19 — open up for business. From attorney general to total police state. Way to go, Mr. Beshear.

To all you Republicans out there who follow President Trump so blindly: As he said late last week in a news conference, you should rush out and grab you a bottle of Lysol and ingest it — in the sunlight of course — so that people will see you collapse out in the yard. Then they might be able to save you. Thank you, President Trump, for that medical advice.

This is concerning the comment about people drawing food stamps and filing taxes: There’s no law that says you can’t draw food stamps and still file taxes. You need to check that, honey.

To the person who commented in Speak Your Piece that Democrats having to show Joe Biden still pictures so he would know what to say: I would be much more concerned about the president trying to inject everyone with Lysol and ultraviolet light. So think about that.

I’m calling in about that fellow that has the book out for sale, ‘The Great Awakening.’ He said the Lord gave him a vision. Well, the Lord gave us all a vision. You don’t need to buy his book. Just go to Luke 21:11 and 21:35.

This is in regards to a woman who comes to Jenkins driving a red SUV: The Jenkins police know who she is. If she’s not drinking she’s smoking pot, and if she’s not on that she’s on pills. I wish to God they would pull her off the road and check her. Maybe she could get some jail time for her erratic driving. The police know about it, and if they don’t get something done about it I’m calling the Kentucky State Police. Thank you.

Right now, here in Letcher County, there are more out-of-state vehicles than are here over the Fourth of July holiday. People from all over the country are in here.

The young crowd at WMMT annoys me, but they don’t get on my nerves like the people at some of the other stations who give all the ‘funny’ coronavirus stuff.

Wearing facemasks and gloves is a good thing, but people need to clean, too. Clean your doorknobs; clean your whole place, whether it is your school, your hospital, your workplace or whatever. We need to start cleaning. Get off your fat behinds and clean.

I am so glad that the price of oil has fallen to less than nothing a barrel. It would be nice to pull up to the gas pump and have the attendant pay you to fill up your tank. The American people need to be repaid for the ridiculous prices we had to pay when Obama was in office — $3.50 per gallon was a shame. How the poor were treated then. So now it has turned around and the bottom has fallen out for oil. In 2010 they had the big oil leak in the Gulf and had a Gulf full of oil. They wasted more than we could use in years. Notice how the price of gasoline goes up quick when the oil goes up, but when oil drops gasoline stays up. These greedy price-gougers need to drop the price of gasoline down to almost nothing, as oil is now worth less than nothing. The American people should be glad that crude oil is worthless and demand that gasoline prices come down also.

I think Donald Trump should give up practicing medicine. Incidentally, can I sue him for medical malpractice?

Every day, Republicans confirm that their concern for their neighbors is absolutely non-existent. Since they despise the United States and the entirety of American society, I propose the entire right-wing fascist cult be physically removed from it. Start with the Traitor-In-Chief and his organized crime family; proceed to his accomplices in Congress, state, and local government; the Freepers, Threepers, ‘Oath Keepers,’ ‘Sovereign Citizens’ and so-called ‘Patriot Movement’ traitors; clean out the snakes’ den all the way down to the professional propaganda trolls and the other ‘useful idiots,’ and ship them all over to their Mother Russia, and cauterize the ground where they stood. The United States will never see another minute’s peace as long as the deathcult is allowed to persist here.

All we hear these days seems to pertain to the COVID 19 virus. How many folks actually take the time to investigate what a virus is and why they have existed since there has been life on Earth? Viruses are not actually living entities, yet they somehow have the ability to invade and infect the cells of living things, including animals and humans. Then the virus causes the cell to manufacture copies of it to then create disease in the host’s body. For instance, bats contain many types of coronaviruses; the COVID 19 virus is just the one that’s causing the current pandemic. Viruses have been in existence since life began on Earth. For those folks who believe there is an all-powerful and loving God, how can they explain the existence of deadly viruses? Why would God put them on the Earth in the first place? Viruses are a part of the natural world and the processes of evolution. They are not the product of some gigantic cat and mouse game between God and Satan with humans as the innocent pawns.

. I really enjoy the Speak Your Piece section of the paper, because it shows how Donald J. Trump became president other than Putin’s help. I say this because of so many ignorant comments; such as ‘if the people hate Trump so much, they ought to send their stimulus check back to the government treasury.’ People, Trump did not send you that check, although he had his name put on it because he is a sociopath narcissist who lives on a self-made island with his name written on everything. I also saw where one writer to Speak Your Piece blamed President Obama for plastic cars of today. If you go back to where steel and chrome cars were designed and made you’d go back at least 50 years and have to go look in some old junkyards. Pollution of air and water did not begin with President Obama. But Trump hates President Obama, so his small little base has to hate on him, too.