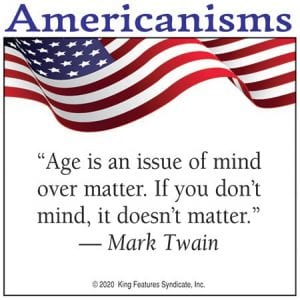 Dear Speak Your Piece: I heard the other day that the state of Kentucky is moving ahead with legalizing marijuana. I thought they were finally doing something right for a change. Then I was told that the marijuana Kentucky is talking about legalizing cannot be smoked. What a bunch of idiots.

It’s amazing how one father, mother and son who are living together get the $1,200 stimulus checks mailed to all three of them when the real sick people who need it can’t get anything. That is what I call unfair.

God bless you, Mr. Trump, and God bless the United States of America. I am calling this comment in on Mother’s Day and would like to say to Mr. Trump’s wife, happy Mother’s Day. Sir, there’s not been a whole lot done about the Obama bunch, but the American people would like to see some action taken for what they did to you. These are the days the Lord has made. We will rejoice and be glad in them. And thank God for mothers.

Science flew us to the moon. Religion flew us into the Twin Towers.

I want to say a prayer for all the doctors and police — the doctors who do not help patients with pain problems and the police who want to put people in jail because they have pain problems.

To a certain person: I hear you’re not doing well now. I hope the devil is firing that furnace up for you, honey, for the way you have treated your children and all of your wives. By the way, you had eight wives. They weren’t all bad women. I hope it gets real hot where you’re going. You have a good day now.

Unemployment is now the highest since the Great Depression. This is MAGA.

To a certain person: I don’t want your Mother’s Day flowers. You can cram them where the sun doesn’t shine.

Republicans don’t care who wins an election just as long as the candidate claims to be a Republican. They don’t believe in majority rule, because if they did Al Gore would have been president and Hillary Clinton would be the president now because they got the most votes.

To Blackey Billy and Betty: Billy, I still have your necktie. You know where I live if you want it back. Look me up one of these days. 7565 are the last numbers of my phone.

Mr. President, you are giving funds to the meat markets and to help the dairy funds, but why doesn’t the government go into canning meat? I remember back in the day when the government used to can some pretty good meat. You could give it away or charge us for it. I think the canned meat is a good idea — and cheese. Those blocks of cheese were mighty fine eating.

I just wanted to fill you in on the MSN. They control Biden’s campaign. They are in charge. So here’s what they’ve got: They have still photos of Biden with a paragraph the MSN has written for him. So you see a picture of him and then say, ‘Well he wrote this’ but they wrote it for him. The name of this show is called Hindin’ Biden.

All I can say is that Donald Trump may go to hell and he may take a lot of old people with him.

I would like to confess that as a younger boy in the 1980s I had a sexual relationship with a teacher at Letcher School. It started off as a working relationship and ended up as a meeting-in-the-bedroom relationship. She knows who I am.

The Emergency Money for the People Act introduced by Democrat sponsors wants to give Americans 16 and older a $2,000 stimulus check each month for the next six months. Even Trump believes we may need another stimulus check of some form, but Republicans are firmly against another check for individual citizens.

It tells plainly in the Bible that if a woman loses her husband and is sick, the people are supposed to help that woman do whatever needs to be done. But nobody in Letcher County breaks their neck to help anybody, not unless they’ve got a dollar sticking out of their hand. When people are sick they should be helped.

The Republicans talk about doing away with the post office, but us country people need the post office. Today my granddaughter who lives next door to me received a package from FedEx. They just left the package sitting out in the rain. Turns out the postal service person found the package and delivered it to us because she didn’t want it to get wet. That’s the difference between the postal service and FedEx.

What keeps me up at night is that we have a crooked nut in the White House and we now we have a system in our courthouse where you can’t get your road fixed unless you have money. If you’re poor you can’t get help. If I had money I wouldn’t need to ask to get my road fixed. What keeps you up at night? Please reply in next week’s Speak Your Piece. Thank you.

Concerning the boy in Knott County who was killed by the animal or animals, I wonder if they ever found out what kind it was? I have never heard anything else about it. But remember, a wolf, a coyote and a bear will kill for feed. A dog kills for fun. If you know what killed the boy, please put it in the paper.

We the people, in order to destroy the most perfect union, have elected a bunch of power-mad people who spend money like a bunch of Nazis. They will destroy this country for the next 300 years if not longer.

This is to the lady who was complaining about older men having things: Wait until you get old and you’ll be wanting to have something, too, when you can afford it. We can still do our thing if we meet the right person. Quit complaining and do something about it. This is Clint. Send me a message in next week’s Speak Your Piece. Tell me where to meet you and I’ll see if I can help you find the answer to your problem.

Could The Mountain Eagle give us a weekly update on how many coronavirus cases there are in Wise County, Virginia and in Harlan and Pike counties in Kentucky? They say there are only three cases in Letcher County, but I wonder how many cases are in the area surrounding us. What affects the surrounding areas will affect us eventually. Thank you.

To a certain married woman on Pine Creek: When are you going to come back out and play again. I’m about ready to play. Come on out and we’ll have a wonderful day.

Everything I do goes wrong. I had an old hound dog and I decided to wean him from eating. Every day I would give him just a little less food. When I got him almost weaned from food he fooled around and died on me.

I’ve been waiting for two stinking months for that check from the government to come in the mail and it hasn’t come yet. I have an uncle who lives in another state who says it has something to do with the IRS. I can’t hold a job, but these other pieces of crap in this county go out and work every day of the week even though they draw food stamps and disability and still get the stimulus handed to them.