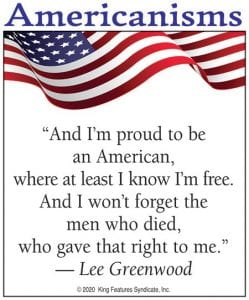 In the contest between reality and make-believe, reality usually wins.

Dear Speak Your Piece: If this doesn’t make you want to get up and call our state legislators, nothing ever will. I’ve got a friend who lives in Detroit. He owns a legal marijuana business there. He makes $30,000 a month. See what is being done to us? They want us ‘down.’ Something that is even worse: The DEA has heroin and marijuana in the same schedule — Schedule One. Everyone knows it’s a lie to say that marijuana is as dangerous as heroin.

Why debate over whether we should destroy our health or our economy? With this president we are doing both.

To the owner of a certain house on Highway 7 in the Jeremiah area: Will you please take the dog off of the short leash and runner that is connected to the porch? He has no room to move or to get much exercise. You should give him or her to someone who will take care of the poor thing.

There’s no fairness in this world, especially when it comes to the $1,200 stimulus payments. You can’t believe a word a politician says. Donald Trump, Mitch McConnell and Andy Beshear are the three blind mice or the three musketeers, because they are all in this together. The people now in the White House are nothing but a bunch of crooks who don’t want to help the poor people. They just let the rich people have what they want. Thank you.

Some sanitation employees are afraid to work because they’re not being provided PPE, but one official has threatened to fire anyone who complains.

To the husband who runs up and down the road buying pain medicine and all else he can get his hands on: You should appreciate the good and loving wife you have at home, the one who stands by you no matter what. You don’t know how lucky you are, man, to have someone like that. You need to get help or fall on your knees before the Lord and ask Him to help you. Turn your addiction over to Him and start appreciating what you have and stop blowing all your money on your pills. All you are doing is supplying drug dealers with more and more money. Think about it.

I wish to take this opportunity to apologize to my family members — especially my children and their children — for being such a big Donald Trump supporter for two or three years there. After watching how he’s acted these past few weeks I can’t believe I actually voted for this man. To my loving son and daughter: I hate to admit it, but you were right all along. This man has become a danger to our country.

All you dummies better quit saying bad things about Mitch McConnell and President Trump. I want you to know they sent me a check for $1,200 and I love both of them and I’ll vote for both of them and you better, too. If you say anything else bad about him I’m going to come up there and bust your nose. Now take that to the bank and see if you can cash it. Bye.

. When your unemployment runs out, just remember who blocked the extension. Trump and the Republicans couldn’t care less for the people who need another stimulus check and their unemployment extended until decent paying jobs are available.

I was wondering why Walmart is still taking returns on items they sell. I don’t they should accept returns with this COVID-19 going on. If you buy it you bought it. I don’t think we should have to pick something up that’s been in someone else’s house. Walmart needs to suspend all returns.

Mr. President, about the stimulus checks; I got mine and I’m thankful for it — it helped. We’ve got people down here in North Carolina who have been trying to draw their unemployment since it was first time to sign up and they haven’t seen anything. What’s wrong with this? Aren’t we paying government officials to get this job ‘did’? Let’s get this money rolling to the people who need it. They have children; they’ve got bills to pay.

To the Trump fan who commented, Sir, ‘there’s not been a whole lot done about the Obama bunch, but the American people would like to see some action taken for what they did to you.’ Here’s a tip for you: A whole lot of other American people would like to see ‘something done about’ Trump’s treason movement. I’m seeing more and more of those American people who are just about ready to make it happen, too. Just keep pushing; there’s a reckoning coming, and the harder y’all push, the quicker it’s going to come — and the harder it will be on all of you when it does.

I stopped by the American Legion the other day to talk to some people who I thought were my friends. As I was leaving I could hear them all laughing and I knew they were making fun of me. Let me tell you all something: That was dirty. I came in friendship because I loved you all. Now I hate you from the bottom of my heart until I die. I pray to God I see that place go under — broke flat. Then you all won’t be laughing at somebody, will you? I really thought you were my friends.

Trump doesn’t care about this virus or the people of the United States. It could kill two million people during the next week and all he would do would be to say, ‘Oh, there are still enough people to vote me back in.’ That’s all he cares about. Since when is an impeached president allowed to run for office again? There should be a law that says an impeached president is never allowed to hold any public office again. We’ll be lucky if he doesn’t sell America’s secrets to his buddies in China, Korea, and Russia — well, those he hasn’t sold already.

All businesses should have a sign that reads, ‘No mask, no shoes, no clothes, no service.’ You have to name all three or some of these morons here in Kentucky would come in with shoes and mask but otherwise stark naked. They are that stupid. And if you think it’s infringing on your rights to have to wear a mask then you must have voted for that racist egotistical arrogant moron butthead tempertantrum throwing jackass in the White House. If you did, then good — go drink some Clorox and shoot up with some disinfectant, you lunkhead.

I hear the new way they are going to do the presidential debates is they will ask Joe Biden a question and it will be the next debate before he has to give the answer. I hope I’m wrong.

If you think Trump can do no wrong and cares about you, your loved ones and the interest of our nation, then you have been indoctrinated by a cult. Trump’s a liar, a con man unfit for office, and without a doubt the worst president in the history of the United States.

To Arissa Mullins of the Jenkins Independent school system: Congratulations. I saw that you were selected for the Rogers Explorers scholarship program. I am so very proud of you. I love you, kid. Melinda.

I want Randy Frazier to know that I am so sorry that I just found out you are not the commander of the American Legion anymore. I want you to know that I think you did a wonderful job up there. It won’t be the same without you. You are a wonderful man and you ran that Legion in a professional and loving way. You respected the veterans, and that’s what means so much to me and my husband. We are both veterans. When we get back home we will get your address and look you up.

To the drug dealers who are still selling their dope during this coronavirus pandemic: Don’t you fear anything — not even God? You still sell your drugs and you make families miserable while you’re sucking them dry like a vampire. All you want is the almighty dollar; you don’t care about the person you sell to or the families you destroy. It’s all about your ill-gotten gains. You think money is everything.

How do people who claim to love the Lord and go to church sell drugs? Does it not bother them? Does it not eat at their heart and soul and mind?

Opening up the country too fast will mean people are dying for money. I’d rather stay in quarantine the rest of my life than see my grandson or some other little kid die of the virus. All I want is to do my best to see that I don’t give it to somebody else. What they do is their business, but when they give the virus to me it is my business.

To a certain person: I have known you for the last 21 years, and all you have ever done is lie.

Speak Your Piece, would you please print a report on what happened to the boy who supposedly got killed by a wild animal in Knott County?

(Beyond the Knott County coroner confirming that 13-year-old Corey Joseph Godsey was killed at Emmalena as the result of an attack by an unidentified animal or animals on February 19, officials have made no further comment.)