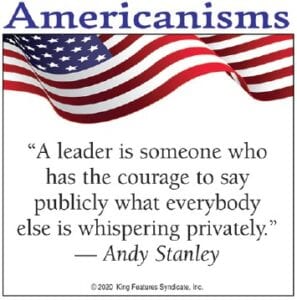 To the City of Jenkins and the mayor: You have got to get rid of the geese at the lake. Everywhere you walk you step in poop. Then you have to chase them away when you sit and have a picnic. I’m getting sick and tired of cleaning goose poop off my shoes. How about you come clean it? You better start looking around at our city and do the things you said you would. Remember, in two years we vote for mayor again. Thanks.

The reason for wearing a mask is to let it cover both your nose and mouth, not just your mouth. Not covering both is like not wearing one at all. A mask protects yourself as well. Several cashiers last week had masks on but were not covering their noses. Where are the supervisors?

A lot of people are saying this one and that one saved their lives from this sickness and that sickness. People don’t save anybody’s lives under any conditions; God is the One who saves us. He is the One who looks over us and protects us and cares for us. We love each other; we put in our part to help people who are in need, sick or whatever, but God is the caretaker over it all. So let’s give God the praise and thank Him for everything. Amen.

I had four brothers in the Army, two on the front line — one in World War II and one in Korea. This younger generation is not bright enough to know where their history comes from and who gave them the right to act stupid. You can’t ask any one of them a simple question about the history of this country, because it’s over their heads. They can’t answer it. I haven’t seen one interview with these protesters where they could answer one basic kindergarten question. But the people lying in the ground up there at Arlington and in other national cemeteries gave them the right to act the way they do.

Our Cheeto president has let the pandemic run so rampant it’s now the worst it’s ever been. Just think how many hundreds of thousands fewer people would have gotten sick and tens of thousands died and how many millions of jobs could have been saved had we a real president instead of a fake one.

So some of the noble red men are upset because they have some white racists carved on a great big rock. Well, that’s America’s rock and it shouldn’t be damaged at all. It’s a work of art. Our great presidents are carved on it.

Wake up, people. Tell me what keeps you up at night. I can’t really say what keeps me up at night besides all the obvious things and reasons, but I’m prepared to tell you what really keeps me up. And that is Taco Bell is the only place that makes its workers stay up until two in the morning while working through this coronavirus and putting their lives on the line to make Taco Bell more money. This company owns many other restaurants other than Taco Bell, but they won’t give a bonus to their employees.

In response to a certain comment in Speak Your Piece: Give me a more specific place about where our meeting place was 10 years ago. I can’t remember.

God bless you, Mr. President, and thank you for what you are doing for the United States of America. Mr. President, poor people. Jesus said we will always have the poor. But, anyway, I was thinking about funerals. Why doesn’t the government set something up so that the poor can be buried? Poor people can’t afford to pay eight- and ten-thousand dollars for a funeral.

Thank goodness our president is doing his job so well. With his pandemic, his recession, and his civil unrest all raging, he’s taken the most important action — trashing NASCAR and professional sports teams in Washington and Cleveland. This will really help.

To the old devil who kept looking in my mailbox for my stimulus check to come to me from the president: Guess what, honey? I already got it. You’ll never get your hands on it now. Even the Lord knows you are a bad person.

The Kingscreek community has suffered a terrible loss, with Alford Roark being gone. We will be praying for him. Our hearts are broken. He was a great guy.

To a certain county judge/executive: The people you pander to may not see the truth, but sweet baby Jesus does. And He knows what’s in your heart. Jesus knows you probably want to do better, but are afraid to do what’s right. He wants you to know whenever you are ready to repent and clear your heart and your guilt, He will be with you.

It’s amazing how people go up to that stupid Fishpond Lake and lay out every weekend. They’re not even doing anything but hanging out with their so-called church friends. I mean that’s real stupid. Do you all think you’re going to see Jesus on that water? You all should be doing a little praying for our people instead of praying for yourselves. And why do you turn your phones off? Fishpond Lake is a joke;