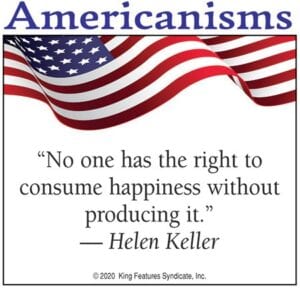 I agree with the caller who spelled out the problems of overpopulation. So, give credit to the president for putting over a quarter of a million Americans in their early graves, with hundreds of thousands more certain to follow before Joe Biden steps in and puts a stop to it.

I would like to ask Sheriff Mickey Stines why we have people living here in Letcher County who were charged in other states with having sex with a minor but are not listed on the Kentucky sex offender list. That is what I would like to know. They were charged and they were convicted and sentenced in a different state. And here they are in Letcher County and not on the sexual offender list. I can meet with the sheriff personally and let him know exactly who I am talking about.

(Kentucky’s sex offender registry is operated by the Kentucky State Police. If you know of someone who should be on the list but isn’t, you should report it by calling 1-866-564-5652.)

I’m going to take some fertilizer and put around these blackberry briars on these old strip jobs and see if we can’t bring them back to life. I would like for others to jump in and help me and see how it works. Have a nice day.

To anyone who doubts that Donald J. Trump is anything but a grifter: Please Google all the real news sites and read about how Trump has raked in $170 million from his followers since Election Day. The crook knows that Joe Biden blew him away in the election by more than eight million votes but is still raising money to pay off his debts. How sad. I hope none of his supporters in Letcher County are falling for this scam. The day can’t come soon enough when we see this outlaw wearing an orange jumpsuit.

I wish the Republicans would just accept the fact that Trump lost. The only fraud was in Florida, created by Republicans. That was the only fraud there was. Joe Biden has won legally, and this time the country voted for the way the people wanted, and that was why people hadn’t voted in years came out to get rid of Trump. So Trump is out. Thank God he’s fired.

A caller’s argument about Justice Byron White’s vote and which party controlled the Supreme Court has little or no bearing on the policies of today’s Democrat Party on abortion. Now you be fully informed. Nature itself will teach you that in trees, plants, fish, fowl, animal or humans, after the act of germination, pollination, fertilization or insemination conception is achieved and the process of new life begins, which is God’s way to replenish the earth. To interfere with or stop that process something will die. And in humans that is murder. Murder is only justified in the minds of fools. And I am fully informed and convinced that today’s Democratic Party policy on abortion is in direct defiance to the will of God. Thank you and have a good day.

To the person who is confused about how President Biden got eight million votes more than President Obama: You’re right, President Obama was much more popular. However, many of the people who voted for President Biden just wanted to get rid of the most hateful, idiotic, inexperienced, uncaring person ever to stain the Oval Office. Not a difficult concept.

Don’t you think track star Joe Biden running across the stage looks good? It makes me think of Obama holding a shotgun up to his shoulder.

Are people really dumb enough to believe the Democrats or whoever stole the election for Joe Biden but decided to leave Mitch McConnell and the other Republicans in control of the United States Senate? Come on, people, you are smarter than that.

We all should be upset about the school system in Jenkins, where they got rid of a lot of good teachers and brought in teachers without proper degrees to teach these kids. And everyone wonders why they are failing? It will not get any better while the board members sit on their behinds and let it happen. I think we should let all the kids go to the county schools and let the Jenkins teachers and staff find another job. What a joke this system is.

Dear Speak Your Piece: Joe Biden might get to be president, but that doesn’t mean he’ll have an army. All it will take is one general thinking he stole that election and then he will have no army.

To a certain lady on Ingram’s Creek: You don’t make videos on your telephone and then expect them not to get out, especially when you are a married lady. Your video is out, and I can tell you exactly what you had on. You don’t make videos like that if you don’t want people passing it around.

Before the election Joe Biden was told not to concede under any circumstances. So why are they making it such a terrible thing when Donald Trump doesn’t concede?

Concerning Fishpond Lake, it’s a shame we have to drive many miles to find a decent place to camp. There are restrooms up here at Fishpond, but I wouldn’t let my dog use them. There needs to be a store built up here that sells camping supplies. There needs to be more electrical hookups. There also needs to be something for children to do. Look what Carr Creek Lake does. It stays booked all the time. Across the mountain in Virginia, they stay booked all the time.

(Your answer may lie in the fact that the campgrounds and recreation areas at Carr Creek Lake and the Jefferson National Forest in Virginia are financed by the federal government instead of a cash-strapped county government like Letcher’s.)

To a certain young lady: What were you doing at Fishpond Lake with the gentleman in the red F-150? He is not your man. And F-I50, she’s not your woman. When you get up on the side of the bank at the picnic shelters you think no one will see you, but here’s your sign.

I was just lying here thinking. You were married eight times, and some of them were very good women and I loved every one of them. Most of them were my friends. So it wasn’t their fault, it’s your fault. Now you’re dragging around a married woman while you call all the others of us witches. I don’t think so. You are the most evil person I have ever known in my life.

To all of you people out there with service through AT&T: I just found out this company sells your personal information. I’m getting calls from Russia, New Mexico, Mexico, New York, Pennsylvania and other places. They are making millions of dollars by selling our information to these other companies. I just canceled my service with AT&T. I don’t ever want anything else to do with them again and I’ve had service through them for 20 years. No more. But be careful before you get AT&T service.

Who is responsible for the blacktop they put down on KY 805 going toward East Jenkins? That stuff was coming up before they even moved their equipment. Now you would think a state inspector wouldn’t pass something that wouldn’t stay down longer than a day. This is a state job and it’s pretty lousy.

I love going to these stores down around the Isom community. There are signs up saying ‘You wear yours and I’ll wear mine,’ but there’s only one problem with that; we are wearing ours, but they don’t want to wear theirs. The reason super-spreading is going on here in Letcher County is because people simply are not willing to wear their masks. It’s a disgrace how people act.

COVID, COVID, COVID. Thanks to The Mountain Eagle I have seen it all. People wearing masks but still shaking hands?

If you are a Trump cultist and you still support him as he behaves like a spoiled brat, you might want to have your reality meds checked. He does not represent the true Republican Party. You really need to Google ‘The Lincoln Project.’ Their videos will show you the truth.

To the caller who said, ‘Hey, everybody. Cut this out and put it on your refrigerator. Trump will win. It is not over yet. Just wait and see. This is Monday, November 23. It ain’t over yet’: The only way your Führer wins is to throw out millions of legal votes. You think there’s been ‘trouble’ up to now? You ain’t seen nothing yet.

I have news for you wannabe god-kings: The United States is not now, nor has it ever been, a theocracy. Religion does not control our government, and if that’s the kind of government you want, you can get the hell out of this country, because you can’t have it here. That is not negotiable, and if it’s a war you’re after, you can have it.

Good evening. I would like to say thank you for the drawing, Art by Lacy Hale. I love art.

I am bumfuzzled. I understand why churchgoers oppose Biden because of his support for abortion rights and gay rights. The Bible speaks strongly against both of these ‘rights.’ However, it puzzles me greatly why these same churchgoers support Trump, who has violated so many Bible commandments. He doesn’t love his neighbors; he prefers to insult and degrade anyone not within his inner circle; he doesn’t worship God; he doesn’t even go to church on the Sabbath. His wealth, family name, power, and prestige are his craven images. Trump has coveted his neighbor’s wife by committing adultery. He bears false witness against others by his unsubstantiated accusations. How many parents would consider his words and actions to be an honor? It can be argued that he has stolen from us taxpayers since this billionaire paid less taxes than many of us poor Letcher Countians. So, churchgoers, please explain why it is okay to oppose certain Biblical wrongdoings while ignoring — even supporting

Thank you to the caller who pointed out correctly that a woman’s right to a legal abortion was brought to us in 1973 by a Republican dominated U.S. Supreme Court, by a vote of seven to two with the only Democrat on the court voting against abortion. This needs to be pointed out very frequently in this column. And you just wait and see, abortion will remain legal in the United States even though the Republicans again have the full control of the Supreme Court.

You might just be anti-American if you are one of those people who support Donald Trump’s coup attempt to take over our federal government even though he got his tail kicked in the election. Check out the latest edition of ’60 Minutes’ and listen to the patriotic Republicans who have actually put country before party. There was no systemic fraud in the November election. Trump lost, fair and square.