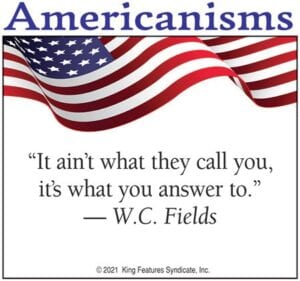 Can you believe the president of the United States got his country back into the World Health Organization when 90 percent of the world knows it probably came from China?

I would like to thank President Biden for making my investment portfolio rise beyond belief. It has jumped more since he’s been in office than it did the whole four years the Trump administration was in there trying to help the rich. Yes, thank you, Joe Biden.

It’s amazing how Joe Biden told the biggest lie there ever was when he said everybody will get this big stimulus check. A lot of people who draw Social Security disability have gotten it, but some people who don’t even work have gotten theirs.

I know a lot of people in this county who didn’t even vote for Joe Biden, but they are out running around and enjoying his stimulus money. I voted for Donald Trump and I got the $1,200 check and the $600 one. I didn’t even vote in the last election and still don’t have my $1,400 check. Biden doesn’t want me to have it and it’s not right.

I’ve been a Democrat for 65 years, but Lord have mercy, I wish I had voted for Donald Trump. I still haven’t gotten my coronis bonus.

To my friend who appeared two weeks ago in Speak Your Piece, dodging self-righteous barbs of mortifications and hearsay neighborhood gossip: I would like to give a few words of comfort and advice. People of low life will attempt to lower your life to make their life appear higher. Do not ever accept another person’s low opinion of you. The supreme power of this magnificent universe knows better, and so should you. Pass ‘go’ and move on.

Repealing the tax cuts on the big corporations would not cover, even close, to one trillion dollars in 50 years. The only people it would hurt would be the common stockholders, who would take a great big loss.

To the caller who compared my ‘ordinary person’s’ take on the second amendment to a ‘ flat earther’: My opinion was based and solely incorporated from the works of a group of statesmen led by Thomas Jefferson in 1787 and 1791. On August 23, 1962, I took an oath to protect and defend the Constitution of the United States against all enemies foreign and domestic; an oath I still honor. For the past 61 years I considered to study and learn about a document I was willing to die for, a document that to me is second only to the holy Bible. Millions of people interpret, but none are experts on the constitution because a self-proclaimed constitutional expert is just a drip under pressure. Thank you.

Let’s think about this for a minute. A guy cheats his way into college, cheats to get out of the Vietnam War, cheats on his three wives, cheats at golf, cheated donors to his fake charity, defrauded students at his scam university, and now you’re expecting us to believe he would now be caught cheating his campaign donors, some of them out of their entire bank accounts? There is no way a godly man like Donald Trump would do any of this, is there?

To my one true love and king: I thank you for every day for any and everything you do. You’ve taught me how love comes true, real love to me is all new. The love of my life lives down the hall; just a little bit ago he was behind the wall. When being together was forbidden at all, you didn’t plan for our love to fall. But isn’t that a call to only be able to look at you in a window? Our hearts are what took the hardest blow. I want to shout I love you so. Love, your queen.

This coronavirus thing has been good for some people. You can call the hospital and they won’t answer because they are on a three-hour coffee break or out to dinner or away from their desks at the time. When you can’t get in touch with anybody, you drive to their office only to have them tell you an appointment is needed first. How are you going to get an appointment when they don’t answer the phone? People get real, this coronavirus stuff is a joke. I got a good flu shot and I am doing good. You have a wonderful day. Later.

I guess when people go to vote in Georgia, they are so stupid they can’t even carry their own water.

Thank you, President Biden. The Labor Department just said that the U.S. added 916,000 jobs in March, the best job growth since last August, dropping the unemployment rate to six percent. This is excellent news, but we still have 8.4 million fewer jobs than we had in February 2020, before the Trump pandemic.

Sheriff Mickey Stines gets on the Letcher County Government Channel and encourages people to call him, but when you do call you get a message saying, ‘The Letcher County Sheriff ’s Office is currently closed.’

It seems like every week Speak Your Piece is filled with Trump-loving traitors lying through their teeth.

‘Superman’, my heart is yours. I promise to always live for you. How does it feel to finally have the forever type of love we both looked for and finally found in one another? My husband, your wife. Together forever through the rest of our lives. 831 baby, always.

J.W., you are my one true love. I can’t wait for the day that we can be together again. I’ll always love you. Your wife, T.M.

For my king: At the time I was at my lowest, weakest, most vulnerable time in life, all I can wish for is to be your wife. Before I met you I crashed flat on my face, rock bottom. You waltzed in and lifted me up. Days turned into weeks then into months. I have come to need you like air to breathe. Your love filled my cold heart so full it has become a volcano eruption of love. You’ve breathed life into my dreams. I’m convinced that all of us has a soulmate. You are mine. We never thought love we would find especially in life’s most depressing chapter. When we hit life’s lowest level we found God’s greatest treasure. Our hearts pure pleasure, you and me equals true love forever. Love always, your queen.

Beautiful crazy sugar sweet the most amazing woman in the world to me. I am and will always be her man her soulmate and her best friend. I love you more than you will ever know. So will you marry me? Check Yes or No. I love you, baby girl, always and forever. Big kisses.