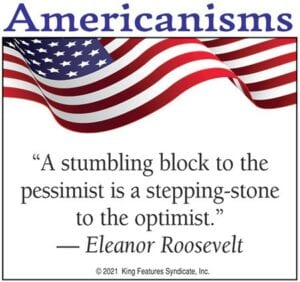 To M.J., the greatest wife in the universe: I love you forever and a day. I miss you more than words can say. You are so sexy, beautiful, faithful, thoughtful and loving. It’s so difficult to be away from you, but our love is unbreakable. You are perfect for me, you complete me. You are most definitely my better half. Just the sound of your sweet sensual voice reminds me of your soft kisses and drives me crazy. I cherish everything about you and always will forevermore. No matter how far apart we are, you are always in my heart. Until I am holding you again, I won’t give up. Yours truly, always and forever, K.D.J.

Now I see why Republicans claim to be so against abortion. People like Matt Gaetz want people to go out and have children so they can molest them and give them Ecstasy and take them across state lines and have big parties. Now you see the true fabric of the Republican Party. They want to drag America down and keep power.

To the grouchy old woman in Doty Creek: You might think you can get away with whatever you want to, but you’ve got a bad past.

A certain older woman who works for a certain large store needs to be fired. Every single time my family and I go in that store she targets us and pays no attention to anyone else but us. She stands right next to us like we are going to rob the store blind. She is the only person that works in her area that does this. Management needs to have a talk with her.

With all the money that’s flowing from the government, why can’t all the children who are going to school get a free breakfast and a free lunch? And why don’t they set up places where even the college kids can get nourishment? This is America, a proud place to be. Everybody is trying to get in here.

Dear Speak Your Piece: I cannot believe the FBI will not help us do something about foreign countries changing the vote on voting machines. I know the FBI is probably mad at Donald Trump, but to let this happen is terrible. People will try to steal elections from now on or people will quit voting. The FBI needs to stop arresting people. They are not worthy.

Could anybody tell me why this county won’t ever do anything about all this garbage that’s everywhere and all these animals running wild? I don’t understand it. What is wrong with our county government?

Funny how the first item in last week’s Speak Your Piece said the WHO came from China. No, the World Health Organization is made up of members of many countries and exists to work worldwide to promote health, keep the world safe, and serve the vulnerable. That’s why the Golden Golfer pulled us out of it, on orders from Vladimir Putin, as part of their plan to destroy America, and why President Biden got us back in. Thank our lucky stars we went back to having an honest, intelligent, experienced President.

Thank you, President Biden, for finally sending us our coronis bonus. And thank you, too, Mr. Trump. You did a good job.

I don’t know what these new words mean that they are coming out with on the news. I know what ‘woke’ is. I woke up this morning. And what’s this other thing, QAnon? Is that some kind of dessert or a Q-tip or something?

Our county is deep in the dump and still all some people can call Speak Your Piece about is how hurt they are that Donald Trump lost his election. People, get over it. You’ve had over five months to heal your hurt feelings. Stop your crying over Trump and call in about something that matters, like a bad pothole on your road that needs to be fixed or the trash that’s all over your neighborhood. We have real problems here in our county that need to be addressed, and besides Donald Trump taking away our federal prison at Roxana not one of the problems we face have one thing to do with who is president of the United States. Stay off Fox News, MSNBC, and those other cable channels and you won’t be so angry all the time.

I guess we don’t need to get new voting machines, we just need to make sure our machines don’t have a modem. That was the big problem with the last election.

To a certain screwball: It must be nice to be able to run to my doctor and tell a pack of lies on me behind my back. The other thing you do is run around with your little handicapped license tags trying to act like you are handicapped when you are not. You think you’re fooling everybody, but your hind-end is going to jail anyway for stealing out of my mailbox.

When I was a young boy, I remember watching on black-and-white TV the images of immigrants getting off the boats on Ellis Island. I also remember watching General MacArthur and President Eisenhower. We knew our borders were safe back then. We knew that America was the greatest country in the world. We didn’t worry about illegal immigrants. Now, what are we going to do about the illegals lined up at the southern border?

To the person who commented about Donald Trump cheating to get into college, cheating to get out of the Vietnam War, cheating on his wives, having a fake charity, cheating at golf, and cheating campaign donors out of their entire savings: Robert Mueller hired 19 lawyers with 40 FBI agents, 500 subpoenas, millions of documents, a three-year investigation with a $30 millionplus unlimited budget, and they struck out, came up short, never got a hit. But evidently all they needed to do was to hire you, Letcher County’s only Inspector Gadget. Now think about this: Show us your proof or shut the hell up.

To the lady at Wolfpen: Why do you walk like you do?

To the person thanking Joe Biden for the increase in their investment portfolio: Actually, the net value may have decreased, considering the bond market. The cost of bonds increased from 0.74 percent to 1.76 percent. The dollar value has decreased by seven percent in the past few months and could fail in the next year or two. And the rise in investments costs and inflation and other things you should consider I can’t list in this comment. You may want to take look at metals such as lithium, cobalt and mercury used to manufacture batteries, solar panels and electric vehicles, largely produced in China, and gold and silver mined in the United States. Also, consider iron ore, nickel and copper increasing in value. Take a look at where and how your money is being invested. Thank you.

Some Republicans holler that the border is open to the United States, and that anybody can come in who wants to under Biden. Then when the people from down in Central America show up they blame it on Biden. They are the ones who announced the border is open. The border isn’t open, but they announced it was open and people down there got the word to come, then get a rude awakening when Biden sends them back.

I contacted Governor Beshear about the bad road down on Route 7 and he said let them eat cake.

To the caller who said, ‘On August 23, 1962, I took an oath to protect and defend the Constitution of the United States against all enemies foreign and domestic; an oath I still honor’: Did you speak out against the traitors who tried to tear down our Capitol and our election in January, or did you stand with them? Did you speak out against the traitor who incited the insurrection, or did you help spread his lies? If you answered the former to either of those two questions, then I’ll accept your statement. If you answered the latter to either of those two questions, then you not only dishonored your oath, you betrayed it and your country.

If Democrats want to save lives, why don’t they stop abortion? That would save more lives than gun control.

I am a member of the Isom community. I have never been so disgusted in my life in a husband and wife in the Isom community and what’s going on with them and what’s been going on. I just don’t understand the mindset of people who do this. I thought the man was out of better stock than that. I knew she was capable of about anything. I just hope they get help before someone is destroyed.

I’m calling concerning the alleged new pedophiles who were just arrested. There is a lot of that going on in Letcher County, and a lot goes unattended. If you have money, you can make the charges disappear. I know one person who works and walks the streets of Letcher County every day after molesting two children under the age of 13. It’s just a sad time we live in, folks, in a crooked little county.

It seems like there are a lot of accidents on the stretch of KY 15, between Campton and Isom. For many years there weren’t that many deaths on that road when it came to traffic accidents. Where is the enforcement of speed and driver control and so forth anywhere on Highway 15? I hope the state police can get more manpower assigned to address this matter. As it is, they are too busy investigating criminal cases. They deserve more help.

I used to work at Food World in Whitesburg and really enjoyed being around a lady I worked with. I would love to reunite with her. She was one of the sweetest girls I ever met. If you are out there, this is your friend you worked with at Food World.

To a certain person: From the very start you have always held the key to my heart. Forever they cannot keep us apart. My best friend, my soulmate, God sent to me at just the right time. He knew I would treat you right and make you mine. Our love can make it through any weather, two hearts together forever.

Wouldn’t it be nice if Dairy Queen came out with fried apple pies and fried lemon pies? I was at a Dairy Queen in Cozumel, Mexico a few years ago and they sold them there. I think it would be nice if they could do that here.