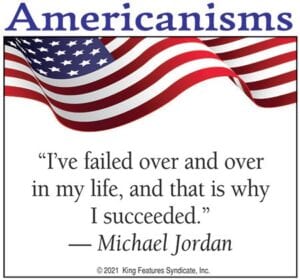 So, you all are still having problems with people sitting in the drive-thru waiting to get their medicines? Why not tell them like you told me — that I can’t sit there waiting on my medicine?

Concerning a comment in the May 5 edition of Speak Your Piece about the Trump recession and the Joe Biden’s stock market increase: And now about your equity remark. It should be fair and just. Under the Trump administration, we had reduced regulations, low taxes, job growth, low unemployment, worker participation. These are some of the things that produce a stable-growth, economy-backed stock market.

I have lived in Little Colley, on and off, for about 25 years. Right above the old Maggard Store there is a little truck that parks right out against the road. When the truck gets torn to pieces, don’t whine and cry. And if the driver of the blue Jeep doesn’t quit backing out onto the road in a blind curve and sit there talking, you are going to get torn all to thunder. That is so dangerous. Why do you not go up the road to Maggard’s Store and turn and come back? Don’t whine and cry when you get hit. Thank you.

Where are the geniuses America trained and pay to protect us from these cyberattacks by foreign countries? It makes no sense that they can tie America up from a foreign country the way Dark Side did. Seeing as they are the Dark Side that makes us the Light Side. Retaliate and make it rough on these people. What if they shut down our nuclear reactors and let them overheat? God bless America and protect us from these idiots.

I just got a call from someone claiming to be representing a veterans’ organization. They asked me to send the $75 to $100. I told them I could send them $5, but they told me the least they would accept is $25. People, that is a scam. So tell them. And our government ought to take better care of the people around here so we could send money to the true veterans who really need it.

I would like to know why an arrest has not been made in connection with the murder of Thomas Wright. He was killed March 4 at the baseball park in Goose Creek.

I’m calling about these gas prices. I paid $3.29 a gallon over here in Cumberland this evening. It was $2.84 this morning. I know these Democrats have to be jumping with joy, because they voted this in. If they are happy then I am happy. Another thing to look forward to is higher taxes.

If you live in the housing project, can other people just come in and stay with you?

To the snobbish caller using Merriam-Webster to clear up their snooty use of insurrectionist and traitor: I was hesitant when I called you and imbecilic neanderthal, but now I am certain. I will refer you back to your initial comment in the April 28 edition of Speak Your Piece, Page 17. Case closed.

I was thought it was against the law to let gray water out in the roads and creeks. Coming through Whitesburg on May 12, gray water was running onto the road near the college. How is it possible for the health department and sewer department to let that happen right in the City of Whitesburg?

To a certain gal in a foreign car: If you’re going to buy and swap pills in broad daylight, you can’t cup your hand and try to stuff them in spandex pants. I’m not going to say what color of car you were in, but you know what I was in because I looked right at you and smiled. You can’t do that in public.

It didn’t take President Lyin’ Biden to keep his promise to the big oil companies. I wonder how much stock he’s got. He’s sure going to get their price up.

I guess no one is worried about the grass cutting on the Colson Cemetery. I sure hope when I’m dead and gone someone will cut the grass on my grave. But that’s highly unlikely since it’s not happening there now. Just a thought.

I finally understand why Jenkins has such a drug problem. It’s because the chief of police is more concerned about the traffic in Hardee’s drive-thru than the drug traffic in the town.

I had to deal with her in two other locations and now she’s at my bank? She needs to get on her broom and fly somewhere else to work.

I’m glad to see the mayor of Jenkins is moving the town board meeting into a religious place, because you can’t get the truth out of him in City Hall. Maybe he can get some of this old-time religion down there and keep straight the promises he made to people. He is like Joe Biden; he won’t tell the truth. Thank you.

People complaining about Joe Biden are committing elderly abuse. He’s an old man and his best days are behind him. If you want to complain, talk to his handlers.

. Well, it’s official. Mitch McConnell has announced on camera that his sole purpose is to block any legislation proposed by the Democrats. Which means, of course, he can then complain that the Democrats don’t cooperate, and the proposed bills are not bipartisan — all of which means that any negotiations the Republicans enter into is just a sham. Good luck for a working democracy.

To the caller who asked what we are going to do when the next pestilence comes through: You’re already here. If we’re smart, you’ll finally be dealt with as the pestilence you’ve always been.

I hope and pray Donald Trump runs again for president. If so, he will be beaten badly, which hopefully will get our once-great Republican Party back on track. I refuse to leave the party and become a derelict Democrat but given the way they have treated a true conservative like Liz Cheney, I will vote libertarian until the trash element of our party is gone.

Just want everybody to know I am trying my best to keep the weeds and grass cut on the Colson Cemetery. If no one else wants to help, I will do it myself, but it’s a big graveyard for one man to cut himself. I am doing my best. And I don’t want any praise or anything like that.

I met a girl in 1998 or 1999. She was a beautiful girl, and I was a mechanic. She needed plugs put in her car and a hole in the gas tank repaired. You know who you are, and you know we first started out with me being just a mechanic and you being a girl. You came up to the garage and eventually, it became something else. I enjoyed the time we spent together. I’ve thought a lot about this, and I would love to get back in touch with you.

This week the Republican Party has finally flipped. I’m amazed they can’t admit the insurrection that happened on January 6. And now Mitch Mc- Connell says he’s there for one reason only, and that is to deny Joe Biden from doing the right thing for America. Isn’t that something? Here we starving to death with no job and the Great Mitch is going make sure we have no jobs. And the Republicans still vote for this man? Wow. This is truly pathetic.

What is the use of having a dog warden if he won’t do his job? We have to pay taxes and they let dangerous dogs run wild out here while no one does anything about it. It looks like I’m going to have to call the governor or the attorney general.

Preacher man, did you tell the widow today or the young couple who are having financial problems that they could keep their tithes as a blessing for God? I doubt it.

I’ve been thinking about Israel and the Gaza Strip and peace treaties. They’ve been trying to do a peace treaty for two thousand years. Let them fight it out. That’s the only way I see of clearing this thing up once and for all. And nuke Iran as far as I’m concerned. America, you better back Israel. God is watching.

Over the weekend a friend of mine came by and looked at some chickens I have for sale. Well, it’s a person’s business what they do with their chickens, isn’t it? This is to a certain know-it-all who sticks their nose into my business every time I have a friend come around.

To a certain fellow in Millstone: I think it’s a shame that people you’ve met in life and became friends with, you turn around and get on Facebook and ask their children to send you nude pictures. I used to respect you, but I don’t anymore. Do not send my daughter any more requests for naked pictures.

Who will bail me out of jail in Letcher County? I am going to Whitesburg to carry a sign to boycott Letcher County Judge/ Executive Terry Adams, who is too busy to listen to the people who voted for him and fix the roads to cemeteries. I’ve tried for a year to get an unpaved dirt road graded to the Big Branch Cemetery, on top of the mountain at Tolson Creek from Roxana. I am not able to walk, or I would. In the fall of 2020, someone was kind enough to drive their pickup truck with four-wheel drive to get me to the cemetery. The road is so bad the truck bottomed out where the ruts are so deep, I haven’t been able to drive a car there in years, and I have great-grandparents, grandparents, parents and siblings buried there. My dad, Clayton Hall, is a veteran of World War II. A cousin, Stevie Ray Gibson, is a decorated hero who lost his life in Vietnam in 1967 and is laid to rest there, along with most of his family. I missed my sister being buried there because my car wouldn’t make it.

To the person claiming that he or she is ‘familiar with jurisprudence in civil, criminal and FISA courts’ and unlike me knows ‘the meaning of the words treason and fraudulent’: You appear to be familiar with the made-up concept of ‘jurisprudence’ put out by the so-called ‘sovereign citizens’ movement, but that’s about all. Give it up, traitor.

Happy Birthday to my best friend and the love of my life, Kevin Johnson. Kevin is an amazing dad who would do anything he possibly could for any one of his five kids. He’s one heck of a coach and mentor who loves sports, watching wrestling and helping everyone around him. Kevin gives 150 percent at anything he does, from researching for hours on different ways to coach and teach. He makes a point to talk to each kid in the school and tell them their potential and how he would love to have them on his team, He never brags on himself nor does he want others to do so. From his parents, his kids, his family in general to the school and our community, he’s always doing for everyone except himself. That’s just who he is and I’m so proud to call him my husband. Kevin, I love you and I hope this next year of life brings you nothing but happiness, fun times and wonderful memories for us to cherish throughout the rest of our lives.