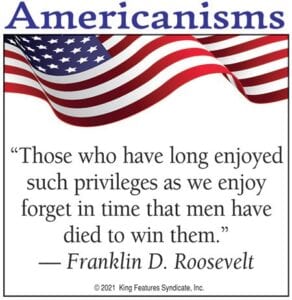 What’s up with so many cars speeding on Marshall’s Branch?

. It’s a shame what’s going on with the gas prices here in eastern Kentucky, and it has nothing to do with the shortage. It’s a money thing. Think about these things.

. Read Revelations 13:2. That really tells you where all of these politicians are getting their power from. There’s nothing we can do about it, people. Pray if you want to, but I don’t know if that will do any good.

. Funny to hear people praising the Golden Golfer over jobs when eight million people lost theirs permanently. And who is crazy enough to love tax cuts for corporations and rich people just to jack up the national debt on our children? Keep drinking that Kool-Aid.

. To the caller referring to the sovereign citizens movement: I’ve never heard of it. I became familiar with science and our system of law in school in the Carolinas. You would know nothing about that. And you called me a traitor. I guess it’s because I served three years, eight months and 13 days in hazardous conditions, seeing dead and injured much too often while wearing the uniform of the U.S. Army while defending your First Amendment right to call me a traitor. That is justifiable reason enough to believe you are in fact a communist socialist, and to you I would be a traitor. Now you can go spout your jackass propaganda to those suckers who will listen to you. Have a good day.

. Concerning the reply to the ‘snobbish caller using Merriam-Webster to clear up their snooty use of insurrectionist and traitor:’ So, you have neither the brains nor the guts to rebut? Color me not in the least surprised. I expect nothing less from traitors and insurrectionists.

. Kudos to President Biden for showing his tax return. It’s so nice that we returned to our tradition of having honest, intelligent Presidents, rather than one who just enriches his crime.

. To Mr. Bartley, who was in on killing Dr. Acker’s daughter: Do you really want to be on the street? People would be waiting for you. You are nasty. You look like Roger Dale Epperson. You’re doing real good where you are, so stay there.

. Hey, folks, let’s give Joe Biden a chance. He is new to politics. Wait a minute. He’s the guy who has been in D.C. politics for 50 years and hasn’t done anything yet.

. So, now the Republicans want us to believe a pizza parlor burning in some city is just as important as the Capitol being invaded on January 6?

. I’ll tell you what’s coming next. It’s your big mouth spouting off about things you know nothing about because you can’t control

. I am reading this week’s edition of Speak Your Piece and saw the comment about the Jenkins police chief being concerned about the Hardee’s drive-through. The person who called the comment in is incorrect. The cop who has trouble with kids in the Hardee’s drive-through is not the chief of police. Get your facts straight. A lot of people have been harassed by him, but he is not the chief.

. One of the readers wants to know what President Biden has done that’s good. Wow, where do we begin? Biden’s American Rescue Act has stimulated the economy with the $1,400 checks per qualifying individual. He doesn’t claim credit for the development of the COVID-19 vaccine, but he definitely worked hard at and succeeded at getting enough of us vaccinated so that Americans can start getting back to their jobs. He is pushing for childcare so moms can work and has stopped the practice of taking children away from their parents at the border and putting them in cages under terrible conditions.

. It is an absolute shame the neighbors have to buy dog food for two dogs living next door that are starving to death and have no water. Another shameful thing is we called the dog catcher to get someone to come and rescue them, but we got no response. We need a new animal control and a new dog warden in Letcher County. It’s a shame no one here cares about the poor treatment of animals. Thank you.

. It’s getting to be about that time of the year when the helicopter starts flying around the county — the Big Green Huey — looking for a marijuana patch. There’s a patch in Doty Creek.

Vice President Kamala Harris, bless her heart, is all hat and no cattle. She is in way over her head, it is obvious.

. Jesus, what a pack of Trump-sucking, Putin-loving trash we have in this country. If there are any

actual Americans left, I submit that there is only one path left for the survival of the United States: Give this trash either a one-way ticket out of the country or an express ticket to hell. There isn’t much time left before you won’t have the choice of ignoring them.

. After hearing Bernie Sanders talk this morning, I can understand why he is not president. And I wonder about the one we’ve got. Palestine swore to erase Israel off the face of the earth, and it’s our duty to help protect Israel.

. I wonder when WXKQ is going to put the Swap Shop back on the air? We people here in Letcher County really do need it. I hope it will be soon.

. Billy Graham is the one they are going to erect a statue of at the United States Capitol. He and Oral Roberts taught pretty much the same thing. I’m not taking anything away from either of them, but what if they were wrong and the Bible is right? People are going to follow the first Christ that comes, and that will be the anti-Christ. Don’t you people know what the mark of the beast is?

. Just want to say I love the cartoons each week. Thank you for publishing them.

. The discerning person looks to wisdom, but the eyes of a fool wander to the ends of the earth. Enough said. Proverbs 17:24. Directed to all scoffers and ecclesiastical outright liars.

. Dear Speak Your Piece: I have an idea. Let’s call off all the protests until after the trial of the cop who killed that black man by putting his foot on his throat until he did kill him. Then, if you’re not happy with the sentence the cop gets go back to protesting.

. Babe girl, you will forever have my whole heart. I don’t know what’s going on. I haven’t heard from you in so long. I hope that I don’t ever let you go. I love you T.L.B., and that’s all I know. Two hearts together forever.