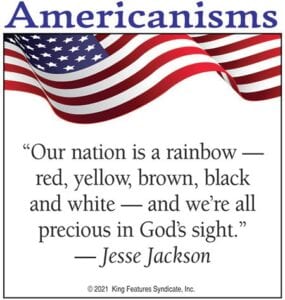 You’d think people would get tired of complaining about ‘The Swap Shop.’ I for one am glad it’s gone. It was just the same people with the same junk every day — be it Jingles or some businesses trying to slip in items. There are other stations with ‘swap shop’ or ‘trading post’ programs, plus there’s Facebook’s ‘Marketplace’ that’s free to use. I hope ‘that bunch’ doesn’t bring it back.

To the person or persons who complained recently about Mike Watts and the driver’s license issues. This wasn’t his doing and he did his best to warn us all and prevent it. This new law came straight from the state legislature, and Mike Watts doesn’t like it any better than any of the rest of us and doesn’t have the power to change it. Educate yourselves.

Well, it’s true, you can call in a certain place for pizza and ask for a certain person and she will give you the hookup. I called to see if it’s true. It is. All you need is the right code words. Just call and ask for homewrecker.

I just want to say thank you to The Mountain Eagle for keeping Speak Your Piece in the same place for the last six or so months. I have bought the paper for several years, mainly for Speak Your Piece. I didn’t like having to look through the whole paper to find it. Please continue to keep it on page two or three. I’m sure I’m not the only one that feels this way. So, from all of us, thank you.

To MDJ: I love you with all my heart and soul. I will not even attempt to describe how substantially I miss you. Without a doubt, you are the G.O.A.T. of all wives. I praise God for blessing me with you as my wife and for blessing our children with you as their mother. You have always and continue to confirm you are unsurpassed as a mother, as a wife, my best friend, and my soul mate. I know we may be separated currently and limited to minimum communication but my love for you succeeds daily. My love for you blooms like the beautiful flowers you dearly cherish. The flowers may wilt and the blooms may fall, but my love for you shall never cease. This storm shall pass, and we shall return in each other’s arms so gentle and true, to have and to hold the most precious wife in the universe forevermore. All the sensations that are present with your beauty, your sensuous smell, your tender caress I long for. I have hidden treasures that I so dearly love, the photo books are a sweet recollection of your loveliness. Just knowing one day soon I will be able to gently pull you close, feel you next to me, and kiss your soft lips is enough to persevere. I love you forever and a day. I miss you more that I will attempt to say. Yours always and forever, KDJ

Someone needs to do something about the dogs at the Dunham Park. My daughter can’t play for being afraid of those barking dogs. They are caged in and there are like five of them. You see a lot of people out there, so there is no reason they should be barking like that. They are skin and bones and bark non-stop. We had a picnic there a couple of weeks back. My family was in from Texas, and they were so aggravated because we couldn’t even hear each other. Finally, we packed up and went to Jenkins Lake. I don’t know how those people stand it up there. Something should be done about that.

To the person who recently said, ‘the mainstream media is an absolute disgrace to the real news people.’ By ‘real news people,’ are you referring to Fox Propaganda Network, or Radio Sputnik?

To the caller who said ‘America can never be great again as long as the criminal gang of Democrats are trying to destroy us’: I wish you and others like you would just shut your stinking treasonous mouths. The biggest mistake Honest Abe ever made was giving you freaks a second chance. We won’t make that mistake a second time, traitors.

I don’t understand how the Bureau of Prisons can say that we don’t need a prison here in Letcher County. Where are they going to put those 500 people charged with the January 6 Donald Trump Insurrection? I suppose an insane asylum might be more appropriate.

I checked the Letcher County Government Channel several times recently, trying to see the latest Fiscal Court session, but mostly got high school reminiscences, some from decades ago. These are probably appealing to some of the TV audience, but could they be limited to perhaps one showing per episode per day?

Aren’t there enough people in the world scamming gullible citizens out of their money without newspapers promoting them in front-page articles? On the other hand, if you have money you are planning to throw in the river anyway, buy some Bigfoot books and DVD’s and learn how con men rip people off.

I recommend Republicans get someone to explain the law of supply and demand to them. One of the reasons gasoline costs more is because people are getting out and traveling after having to stay home for over a year during the Trump Pandemic.

I’ve always wondered what the strongest thing in the world is. I used to believe it was ex-lax because it knocked the poo out of Superman. But now it I’m thinking it’s stretchy pants. The same pair will fit a girl who is size zero and one who is size 28. Those things will stretch over the top of a car.

Hey, how do you like these high prices you voted for? And this isn’t the worst of it. The worst is yet to come.

I just wonder about these lawyers who signed us coal miners up for black lung. They say they don’t get paid unless we get paid. I hope that’s the truth. But what I’m asking is how do we know they aren’t getting paid? That’s a lot of work to be doing for free.

To the grandparents and great-grandparents: Remember the time when we used to have Wolfman Jack on the radio and the girls would be dancing on the cars while the men were drinking from fruit jars? Today’s children will never know days like that. There wasn’t much fighting going on, but we sure had a good time. I loved every one of you; I still do. I can still see some of you standing in the headlights and singing. I still think about you girls, and I hope you’ve had a good life.

Congratulations to Barry and Teresa for getting together.

And congratulations to Brenda, who is getting ready to have triplets.

I just saw on the news where Union Pacific Railroad has parked out 3,100 diesel locomotives and furloughed 5,000 workers. The only thing I’m saying is what used to be the bread and butter for UP, CSX, Norfolk Southern and others is gone, and that was coalhauling. That is gone. These locomotives are now on long-term parking. I hate to see that. I think it will hurt this country.

To the person who owns the black Angus cattle running loose on lower Camp Branch: Please try to pen them up. They are destroying our yard and carport. Thank you.

To a certain person: If anyone knows anything about worshipping the devil, it would be you and your crowd because you have been doing it on a nightly basis for years. And the only reason you don’t like me is because I don’t want any part of you or what you do.

To a dumb person: Old people can be grouchy, but being dumb isn’t anything to be proud of. Being smart doesn’t have anything to do with giving you a dirty look when you go by. Nobody will live forever, idiot, not even you. Playing like an angel is easy when I know what a sorry piece of scum you are. And a dirty look is more than you deserve. Get a life, imbecile.

To the peeping tom from the classy blonde who meets her lover from Virginia: Why do you care if I put on all my clothes when he brings me back to my car? What is it to you?

I am going to give you a head’s up on vendor malls: Be careful if you buy pallet stuff or anything electric. They won’t refund your money even though it is supposed to be brand new. I have a friend who paid $35 for an electrical item that wouldn’t work and they wouldn’t exchange it. Another friend bought a set of brand-new sheets, got the set home, and there was only one sheet in it. The same thing happened with her. No exchange, no refund. So be careful and open everything before you buy it.

Dear Speak Your Piece: Before we defund the police we need to start at the top with the FBI, then remove half the DEA.

After 90 days, Vice President Harris finally went to the border, but about 300 miles from where she needed to go. And now they are having a commission on why people are leaving their countries. A child could figure that out; they just want a better life.

I saw today where there were 74 people shot in Chicago and only six of them died. How come those killings are not worthy of the news? You never see it reported. Nobody ever says anything about it. I think it’s a shame you can allow that to go on for this long and nobody will step and say we’ve got to put a stop to this. And the news media won’t report it, so that’s who you have for your media nowadays. Thank you.

(Not sure where you get that today’s media doesn’t cover such events, especially since this past weekend’s 74 shootings in Chicago was reported on by the Associated Press, Newsweek, CNN, Fox News, the New York Times, the Chicago Tribune, the Chicago Sun-Times, the Wall Street Journal, USA Today, and the Christian Science Monitor among many others.)

To the witch who lives next door to my house: When I pick up the phone, you hang up. What’s the matter, honey?

. It’s a shame that Letcher County has no rules or laws, and the county officials won’t do anything. The grass and weeds beside the roads are as high as can be and you can hardly drive the roads because of all the potholes. I wish someone who would do something would get in office. We sure don’t have anybody now.

Judge Adams, when are you going to let us senior citizens start walking free again?

. To the caller who asked if there was ever a bowling alley in Whitesburg: Yes, there was. It was over behind the courthouse, straight across from the old health department in the Fields Hardware and Furniture building. There really was a bowling alley in there at one time.

I’m calling about Mike Dingus, the Neon policeman who was said to be investigating a case before he got hurt and had to take off work. If he’s off work, then shouldn’t the state police be doing the investigation?