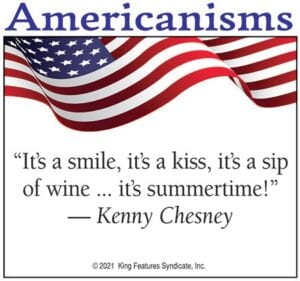 Hey, Judge Terry Adams, when are you going to start letting us seniors walk for free at the rec center again?

. Boy, we’ve got some county. All you see are dogs, dogs, dogs. Why isn’t anyone enforcing the laws that require them to be controlled by their owners? This county is awful. We have no leadership. We better be looking for some.

. To a certain person: You think you’re a patriot, hanging up that new American flag after you call people living around here racist. Well guess what, honey. I’ve got a Revolutionary War ancestor and I have Confederate ancestors. You are nothing but a coward.

. I sit here in my recliner watching a lot of news. I see the gas prices rise. Democrats must have a lot of money invested in the oil companies. I also see a lot of drugs coming across the border. They must be the ones getting wealthy off all the drug trade.

. Condolences to the families in Florida who lost their loved ones when the building fell. The foundations of all those buildings need to be checked. It reminds me of the foundations in our churches. They need to figure out what they are built of and what they stand on. Is it the gospel truth? Is it built on rock or is it built on sand? What are they welcoming into their churches? God bless America, but that building in Florida isn’t the only one in danger of falling.

. A Southern Baptist preacher put on Facebook that everyone should have to have a proof of citizenship and photo I.D. to vote. I have never had to do any of that because I live in eastern Kentucky. Why do they want to make new laws for eastern Kentucky just because of what one jerk might do in Lexington or because of what some Baptist preacher says?

. My neighbor had to stay home with an ankle bracelet because he is facing criminal charges. However, he had a gun to protect himself from his neighbors and their dogs. I think they should take a person’s gun away if they face criminal charges. I also think crazy people shouldn’t have guns.

. Now that we are pulling our soldiers out of Afghanistan, we know the Taliban will take it back over. And woe on those Afghan citizens who helped the United

States and woe be upon the women. Now, I’ve got a question: Are we going to back Israel if there is all-out war between that nation and Iran? We better back Israel. Anybody who has studied the word of God knows we have to back Israel. Have a nice day.

. I would like to encourage my fellow voters in Letcher County, eastern Kentucky, and the entire state of Kentucky to continue voting for the Republican Party. I just enjoy driving from Letcher County to Prestonsburg to renew my driver’s license — and to take my granddaughter there for her driver’s test. I just enjoy these trips and thank the Republican Party for giving me the opportunity to make them.

. They say there are all kinds of jobs available, and the businesses can’t hire people. The thing is the businesses want the people to work 15 to 25 hours a week for $8 an hour. Instead of hiring people full-time they want to hire them part-time and then have them call it a job.

. I don’t think they should let people visit the nursing home and stay so long when two patients are sharing a room. If people are sick, they can’t get any rest when others are there all day visiting. It’s not good.

. I see we had an all-SEC College World Series. If you can’t run with the big dogs, get off the porch. And let’s remember that Alabama won the national championship in football. So, there you are. (And the University of Kentucky won the women’s NCAA Volleyball Championship as well.)

. To a woman in McRoberts: The truth is your man tried to get my friend to come live with him while you were sick. He told her that he didn’t care about you, and he wished you would not make it. For your own health and safety, you need to get away while you can, because the things he says towards you are very serious. We hate to see you in this situation and ask you to please watch your back.

. To a certain person: Who the heck do you think you are? I wouldn’t call someone else dumb if I were you. Do you think you’re perfect? I would call you scum, and from the looks of you that is what you are. Get a treadmill, you need it.

. When it rains so much, some people get wet. When the country is flooded with guns some people get shot. We have more guns than we have people in this country. Why do we need so many guns today when we’ve never had that many before? We act like the ‘times’ have changed, but the times

have changed only because everybody has a stupid gun and are shooting each other over foolishness.

. To the blonde who asked why it’s anyone’s business if a certain blonde has her clothes on properly when she’s brought back to her car by a man from Virginia: Well, I know the woman’s true man and I know where she lives. What makes me mad is that she’s a cheating woman. So, pictures will be taken, and her husband will be looking at them. Then she can explain to him whether it matters or not.

. If I were the mayor of Jenkins and I was afraid to tell my crew of men what to do I would go crawl under a rock to finish out my term. Thank you.

. Why don’t we in the Jenkins School System just send all our high school students to the Letcher County system and turn our grade school into a charter system. That way our taxes will be lowered. We won’t need a superintendent or any of the other stuff we have. It would be much cheaper.

. Concerning the article headlined ‘Letcher school board gets 2nd prayer complaint,’ it’s about time people started standing up to these wannabe priest-kings. The United States is not

now, nor has it ever been, a theocracy. No church rules this country, and no church group gets to call the shots. Christian dominionism is a blight on humanity. There is not a nickel’s worth of difference between Christian dominionism and the Taliban. Best to put a stop to it now before we end up like Iran.

. I sure wish WXKQ would bring the Swap Shop back on the air. We people need it.

. Why are Mitch McConnell and so many other Republican members of Congress so determined to keep the wealthy people from paying their fair share of taxes? Even with the tax reductions, the Republicans gifted them with, anyone who is alert knows most of them are paying zero in taxes because of all the loopholes. That’s pretty obvious, because even when the Democrats agreed to a 15 percent loophole-free rate the Republicans turned that down.

. People, they can’t tell us that if they cut those people off that unemployment, they won’t get out and go job-hunting. If they don’t, let them starve to death. It’s a bit strong, but I mean it.

. To the person who asked, ‘How do you like these high prices you voted for? And this isn’t the worst of it. The worst is yet to come’: I would ask you where your head has been for the past two years of escalating prices, but we all know the answer is: up Traitor Trump’s you-know-what.

. Seventy-five million people voted for Trump, but the election was highjacked by Democratic Party using COVID-19 with help from China. Fake so-called Christians voted for Biden. This is my point of view. God bless our nation and Trump. The Harlan County man.

. I have good news for you if you have been to a doctor in eastern Kentucky or anywhere else for that matter, and they don’t know what is wrong with you and cannot help you. There was a time when doctors would try to help their patients to get better or send them to another doctor that could. But now if you go to a doctor, they might run a test or two to get paid for the insurance you have, then they will say they don’t know what is wrong with you and tell you to go home instead of finding out what is wrong with you. But the good news is Jesus still heals, but doctors and the government don’t want you to know that. Read St. Mark 5:25-29. A certain woman suffered from many things for 12 years and spent all she had on doctors, and still grew worse. Then she heard of Jesus and eventually touched his garment. She said, ‘If I may touch but his clothes, I shall be whole.’ And straightway the fountain of her blood was dried up: and she felt in her body that she was healed of that plague. Jesus can heal you. Jesus can save you. Call on Jesus.

. Donald Trump and dog crap on your shoes have a lot in common. Both are hard to get rid of.

. Since 2015 Donald Trump has been mentioned in the news almost every day. It’s no wonder he feels so important. It’s time to forget about him.